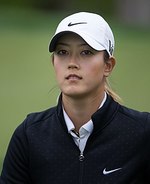 Michelle Sung Wie West (/ˈwiː/; born October 11, 1989) is an American professional golfer who plays on the LPGA Tour. At age 10, she became the youngest player to qualify for a USGA amateur championship. Wie also became the youngest winner of the U.S. Women's Amateur Public Links and the youngest to qualify for an LPGA Tour event. She turned professional shortly before her 16th birthday in 2005, accompanied by an enormous amount of publicity and endorsements. She won her first and only major at the 2014 U.S. Women's Open. More about Michelle Wie

Current items with a signature of Michelle Wie

These are the most current items with a signature of Michelle Wie that were listed on eBay and on other online stores - click here for more items.

Traded items with a signature of Michelle Wie

The most expensive item with a signature of Michelle Wie (2013 UD EXQUISITE MICHELLE WIE RC RPA PATCH AUTO AUTOGRAPH /99 PSA 10 GEM POP 2!) was sold in April 2022 for $1499.99 while the cheapest item (GOLF STAR MICHELLE WIE SIGNED INDEX CARD AND PHOTO) found a new owner for $0.99 in October 2008. The month with the most items sold (8) was March 2018 with an average selling price of $35.98 for an autographed item of Michelle Wie. Sold items reached their highest average selling price in December 2019 with $399.99 and the month that saw the lowest prices with $0.99 was October 2008. In average, an autographed item from Michelle Wie is worth $39.00.

Most recently, these items with a signature of Michelle Wie were sold on eBay - click here for more items.

At the U.S. Women’s Open, Michelle Wie West Reflects on an ‘Amazing Journey’ (06/01/22): The golfer announced last week that she would play her last tournament for the foreseeable future at Pine Needles. “This week, I’m just soaking it all in,” she said.

Michelle Wie West to step away from LPGA Tour after U.S. Women's Open, won't rul (05/26/22): The 32-year-old will steer clear of competitive golf after next week's event at Pine Needles

Michelle Wie West on Motherhood, Pain and a Possible Return to Golf (07/24/20): “I used to think my wrist was hurting during a round until I went through labor,” the former L.P.G.A. star says. Her competitive days might not be over.

Michelle Wie battling perfectionist tendencies (03/2015): Michelle Wie won her first major last summer but the achievement hasn't made her more relaxed on the golf course. If anything, it's driving her even harder.

Michelle Wie finds release on golf course and in her art (01/2015): Paintings, clothing design are liberations for the former phenom, coming off her best season.

Golf: Michelle Wie gets part in TV series 'Hawaii 5-0' (12/2014): The Dubai Open will play a role in determining the Masters field

Michelle Wie: The dark art of a golf star (09/2014): Her artwork is dark, bold and often sombre, with black figures and sinister skulls splattered across the canvasses. Not exactly what you would expect from golfer Michelle Wie, right?

Michelle Wie shoots 67 in first round of ShopRite Classic (05/2014): GALLOWAY TOWNSHIP, N.J. (AP) — Jennifer Johnson matched the course record with a 9-under 62 on Friday to take the first-round lead in the Sh…

Southards: Michelle Wie anxious to play U.S. Open at Pinehurst (01/2014): Michelle Wie has yet to live up to the expectations that were heaped upon her as a junior golfer.

Michelle Wie forges anti-‘air hug’ alliance with Stacy Lewis (12/2013): Michelle Wie offers her take on what goes on inside the ropes and in her dreams in a new Golf Digest column.

TTYM: Watch The Sabres Make The Rookies Compete In Dance-Off And Michelle Wie Ea (10/2013): by @TaraLipinsky More Columns here. In this week’s That Thing You Missed, what might finally be too much information about a former NBA player, what might be the best college band performance ever, and the Buffalo Sabres have […]

Swede Caroline Hedwall stays hot, moves to 4-0 with Michelle Wie next (08/2013): Even though she's from Sweden, Caroline Hedwall knows a thing or two about playing 36 holes of golf on a hot day.

Michelle Wie looks to turn around LPGA Tour struggles with home-state stop in Ha (04/2013): KAPOLEI, Hawaii — Michelle Wie is hoping a Hawaii stop on the LPGA Tour will inject a little aloha into her game. She’s 91st in the world ranking after breaking 70 only once in 18 rounds so far this season. [...]

Michelle Wie gives back to Hawai'i junior golf (12/2012): Here are the most recent story comments. View All No comments yet!

Michelle Wie finishes in 14th at Lorena Ochoa Invitational (11/2012): Here are the most recent story comments. View All No comments yet!

Michelle Wie joins HSJGA in online fundraiser for Junior Golf (10/2012): HONOLULU — Michelle Wie has assumed the title sponsorship of the Michelle Wie Hawai‘i State Junior Golf Association Tournament of Champions, which will play at the Wailea Golf Club in December.

Michelle Wie has respect and advice for Lydia Ko as they prepare for Women's Bri (09/2012): Michelle Wie's first practice round at Royal Liverpool featured temperatures quite different from those in her native Hawaii.

Purple dress proves unlucky for golf prodigy Michelle Wie at US Open (07/2012): London, July 9 (ANI): Michelle Wie, who seemed confident that she was going to be crowned US Open champion on Sunday, concentrated on her tilt at the title but her male fans ended up looking at the wrong pins whenever she played a shot due to the high hemline on her tight dress.

Soon-to-be-grad Michelle Wie is ready to win (03/2012): Michelle Wie of the USA, who is about to graduate from Stanford, will soon be a full-time golfer. / By Ross Kinnaird, Getty Images RANCHO MIRAGE, Calif. (USA TODAY) — There is good news from Stanford University.

Golf: LPGA star Michelle Wie grew up while at Stanford (02/2012): Former phenom has best of both worlds at Stanford

Michelle Wie: Lexi Thompson 'has the game' to compete as pro (10/2011): HONG KONG - LPGA newcomer Lexi Thompson has what it takes to compete on the pro circuit, former teenage golf prodigy...

Golf: Michelle Wie carries early US Solheim Cup hopes (09/2011): DUNSANY, Ireland: Alison Nicholas hopes that a mix of youth and experience will be the recipe for success at Killeen Castle from Friday as Europe attempt to reclaim the Solheim Cup for the first time since 2003.

Golf: Michelle Wie's bid to repeat in Canadian Women's Open falls short (08/2011): Pro who also is Stanford student fails to get birdie on final hole to force a playoff and settles for a tie for second behind Brittany Lincicome.

Michelle Wie set to return to Dubai Ladies Masters for her third straight year | (06/2011): Michelle Wie finished second in Dubai in 2009 and fifth last year. DUBAI, United Arab Emirates -- Michelle Wie will end her 2011 competitive season at Dubai in the final event of the year, said officials at the Ladies European Tour.