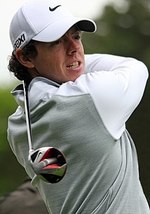 Rory McIlroy MBE (born 4 May 1989) is a professional golfer from Northern Ireland who is a member of both the European and PGA Tours. He is a former world number one in the Official World Golf Ranking, having spent over 100 weeks in that position during his career. He is a four-time major champion, winning the 2011 U.S. Open, 2012 PGA Championship, 2014 Open Championship, and 2014 PGA Championship. Along with Jack Nicklaus and Tiger Woods, he is one of three players to win four majors by the age of 25. More about Rory McIlroy

Current items with a signature of Rory McIlroy

These are the most current items with a signature of Rory McIlroy that were listed on eBay and on other online stores - click here for more items.

Traded items with a signature of Rory McIlroy

Most recently, these items with a signature of Rory McIlroy were sold on eBay - click here for more items.

Rory McIlroy Looks for the Magic He Conjured Last Year (01/25/23): Rory McIlroy’s ranking survived a weekend scare. With Scottie Scheffler close behind and Jon Rahm surging, his outing in Dubai might suggest a lot about how long it will last.

Rory McIlroy explains Patrick Reed dust-up in Dubai, says he was served with sub (01/25/23): McIlroy discussed the recent driving range scuffle between he and the former Masters champion

Why Rory McIlroy is poised to end major championship drought in 2023 and collect (12/2022): The four-time major winner very well may be on track to make it five or six in 2023 and beyond

Tiger Woods joins Rory McIlroy in calling for LIV Golf boss Greg Norman to step (11/2022): Woods laid out what needs to happen for peace talks to begin between LIV Golf and the PGA Tour

Rory McIlroy's decade of sustained greatness is as impressive as it is rare (10/2022): McIlroy's success atop the sport of golf only rivals the likes of legends Tiger Woods and Greg Norman

Rory McIlroy makes it clear that he doesn't think LIV golfers should be on Europ (09/2022): The bigger question is whether it will even matter as younger stars try to earn spots over older LIV players

The Power 18 golf rankings: Rory McIlroy strengthens on top, Will Zalatoris rise (08/2022): The FedEx Cup champion ends the season with an $18 million prize and as the top name on The Power 18

Rory McIlroy, Will Zalatoris top best major championship golfers in 2022 despite (07/2022): In golf, and in majors especially, it's better to play great for one week than good for four

2022 Travelers Championship leaderboard: Rory McIlroy stands on top with more bi (06/2022): There were no signs of a major championship hangover for McIlroy on Thursday

2022 PGA Championship odds: Jon Rahm a slight favorite over Masters champion Sco (04/2022): Can Rahm regain the No. 1 ranking in the world from the man who took it from him?

2022 Masters: Rory McIlroy makes quietest bid for career grand slam in eighth tr (03/2022): McIlroy faces his latest chance to join one of the most exclusive clubs in sports history

PGA Tour stars like Rory McIlroy, Jon Rahm again speak out against 'massive risk (02/2022): Three of the best in the world are unconvinced the Super Golf League is the path they should take

Hero World Challenge leaderboard: Rory McIlroy in three-way tie for lead after R (12/2021): The four-time major champ is going for his third win of the year

Rory McIlroy shoots scintillating 65 to lead European Tour finale by two strokes (11/2021): The No. 8 player in the world started hot and never faded on a course where he's won three times

Greg Norman Takes Aim at PGA Tour With New Saudi-Backed Golf League (10/2021): Norman has tried to get a competing league off the ground before, but top players like Rory McIlroy have shown only disinterest.

Ryder Cup opportunity lost, Rory McIlroy and Europe weep over relationships, new (09/2021): Relationships in team golf are often elusive, which makes weeks like this one of the best in sport

Irish Open, Scottish Open carry added emphasis as The Open gears up for return o (06/2021): Rory McIlroy will kick off a fun three-week stretch for himself at Mount Juliet this week

2021 PGA Championship odds: Rory McIlroy surges to top after Wells Fargo Champio (05/2021): An updated look at where the value is as the second major of 2021 fast approaches

2021 Masters takeaways: What we learned about Will Zalatoris, Rory McIlroy and A (04/2021): Another ridiculous major week is in the books, let's spin it forward

PGA Tour tells Rory McIlroy a volunteer stepped on his ball at the Farmers Insur (02/2021): After feeling unsure of how it all went down, McIlroy got a fascinating update early this week

Masters 2020: Rory McIlroy's path to victory, Justin Thomas' improvement among n (11/2020): A unique week at Augusta National ended with a worthy champion who will defend his title in five months

Rory McIlroy, Justin Thomas testing the waters on adding more speed to their swi (10/2020): The speed wars are on, and Bryson DeChambeau is currently winning

2020 PGA Championship odds: Rory McIlroy, Bryson DeChambeau, Jon Rahm among the (07/2020): Despite never finishing in the top 10 at a major, DeChambeau sits just behind Rory McIlroy as the favorites

Rory McIlroy says he will play first three PGA Tour tournaments when season resu (05/2020): McElroy is ready to get back out on the course

Rory McIlroy: It's better to delay Ryder Cup than play without fans in attendanc (04/2020): McIlroy makes a compelling case for pushing the Ryder Cup back a few months

The Power 18 golf rankings: Rory McIlroy clearly ahead of pack as best golfer in (03/2020): Ranking the best players in the world right now

Rory McIlroy rejects idea of joining proposed Premier Golf League: 'I'm out' (02/2020): McIlroy discussed why he is against joining a proposed tour like the PGL ahead of this week's WGC event

2019 World Tour Championship: Jon Rahm tied for lead, Rory McIlroy back in conte (11/2019): Rahm is in favorable position to win the Race to Dubai while McIlroy bounced back on Saturday

Five golfers who can legitimately claim they are the best in the world entering (10/2019): Rory McIlroy and Brooks Koepka are obvious, but do you know who else is in the group?

Rory McIlroy explains his frustrations with easy course setups on European Tour (09/2019): The best player on the planet wants the toughest setups

Rory McIlroy Caps Season With a Win at the Tour Championship (08/2019): By adding the PGA Tour’s finale and the FedEx Cup to his victories, he threw himself into competition with Brooks Koepka for Player of the Year.

Rory McIlroy starts fast, stumbles home, knows he needs a big Sunday (04/2015): Rory McIlroy shot a respectable 68 Saturday, but probably had a lower number in mind after playing the front nine in 32.

Rory McIlroy: My Game-Changing Tips (09/2014): Rory McIlroy says his driver, iron and wedge swings are now on autopilot, thanks to work with longtime coach Michael Bannon. Here, in his own words, are Rory's game-changing tips you can use to transform your swing into a championship move.

Russell Henley leads in Massachusetts, with Rory McIlroy in the hunt (08/2014): Russell Henley made five birdies in a seven-hole stretch Sunday on his way to a six-under 65, giving him a one-shot lead in the Deutsche Bank Championship going into a Labor Day finish loaded with possibilities.

Rory McIlroy carries on from where he left off at The Open as he hits opening 69 (07/2014): Amidst a sea of tense faces fretting over Ryder Cup places and loss of form, Rory McIlroy was a veritable beacon of tranquility at the WGC-Bridgestone Invitational at Firestone on Thursday.

Laura Robson backs Caroline Wozniacki to make Wimbledon quarter-final after Rory (06/2014): Wozniacki faces Zahlavova Strycova in the fourth round and Briton Laura Robson is backing the Dane to reach the last eight

Rory McIlroy goes into Wells Fargo Championship aiming to end 20-month wait for (04/2014): Second success at Quail Hollow course where Irishman broke his US duck in 2010 would suit him perfectly

Rory McIlroy leads Dubai Desert Classic (01/2014): Rory McIlroy took another step toward regaining his form Thursday with his lowest score in more than three years, a 9-under 63 while playing with Tiger Woods, to take a two-shot lead in the Dubai (United Arab Emirates) Desert Classic.

Rory McIlroy in the swing at last with brilliant (10/2013): World No3 back to his best with eight-birdie first round Mickelson's challenge sinks with two visits to the water.

Rory McIlroy tunes out his critics (07/2013): Rory McIlroy's love life has been dissected as much as his golf game in recent weeks. It's no wonder he might try to tune some of that out.

Rory McIlroy and his birdie hit a rough patch (06/2013): EXCLUSIVE: SPORTS glamour couple Rory McIlroy and Caroline Wozniacki are on the verge of splitting up, pals fear

Rory McIlroy down after a 78, but at least he didn't leave: Memorial Tournament (05/2013): Guan Tianlang, 14, flipped his ball to a fan, also 14, and the fellow eighth-grader was ready to ask the Chinese amateur to come over and hang out.

Evans: Strong Friday crucial for Rory McIlroy (03/2013): After shooting 73 on Thursday, how important is Friday's second round of the Shell Houston Open for Rory McIlroy ? It could determine if he has any kind of momentum heading into the Masters, writes ESPN.com's Farrell Evans.

Tentative Rory McIlroy still searching for answers to his puzzling form (02/2013): Rory McIlroy's slow start to the new season continued as he began the defence of his Honda Classic title at Palm Beach.

Rory McIlroy looks on as Caroline Wozniacki's disastrous year on-court continues (12/2012): CAROLINE Wozniacki's preparations for the Australian Open are in tatters after she was bundled out of the Brisbane International by the world Number 103.

Rory McIlroy absence irks sponsor (10/2012): CHOOSING to play an exhibition match with Tiger Woods rather than a world championship three days later in the same country was always likely to be a controversial move by golf’s world number one Rory McIlroy.

Rory McIlroy better almost late than never at Ryder Cup (09/2012): There were 11 minutes to go before Rory McIlroy was scheduled to be on the tee for his Ryder Cup singles match when he finally arrived

Rory McIlroy maintains 'high expectations': Bill Livingston -- Bridgestone Previ (07/2012): What's wrong with Rory McIlroy? Not all that much, says the dashing young Ulsterman, as he prepares for the Bridgestone Invitational.

Golf: Rory McIlroy out to put on a homecoming Royal Portrush show (06/2012): IT is a question thousands of golf fans are sure to be asking this week as they pack Royal Portrush for the first Irish Open in Northern Ireland since 1953.

Olympic Club will present 'tricky test' in U.S. Open, says Rory McIlroy | News | (04/2012): After his record-setting performance last year, Rory McIlroy is counting on the U.S. Open to return to ''golf's toughest test'' at the Olympic Club in June.

Golf's world No 1 Rory McIlroy taken to the hearts of the American public (03/2012): Oliver Brown: golf's world No1 wowed the White House last night but there is danger in becoming such a huge Stateside hit

Golf: HSBC Championship: Rory McIlroy loses chance of sharing lead after Luke Do (01/2012): RORY McILROY found sympathy in short supply from Tiger Woods after a mistake cost the young Ulsterman a share of the lead at the Abu Dhabi HSBC Championship.

Heatwave at St Andrews could foil Rory McIlroy (09/2011): Rory McIlroy's bid to prove himself a man for all seasons at the Dunhill Links Championship could amazingly be foiled by a Scottish heatwave in September.

Rory McIlroy to golf commentator at Irish Open: 'Shut up' (07/2011): KILLARNEY, Ireland - Rory McIlroy showed his temperamental side after blowing an early lead and double-bogeying...

Graeme McDowell is all cut up but Rory McIlroy survives at Wentworth (05/2011): It was ‘Navy Day’ in honour of Seve Ballesteros at Wentworth yesterday and the majority of the field at the BMW PGA Championship paid tribute to the Spanish legend by donning sweaters of the same dark blue hue he famously wore.