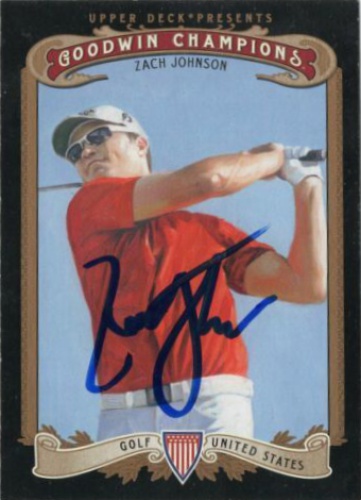 Zachary Harris Johnson (born February 24, 1976) is an American professional golfer who has 12 victories on the PGA Tour, including two major championships, the 2007 Masters and the 2015 Open Championship. More about Zach Johnson

Current items with a signature of Zach Johnson

These are the most current items with a signature of Zach Johnson that were listed on eBay and on other online stores - click here for more items.

Traded items with a signature of Zach Johnson

The most expensive item with a signature of Zach Johnson (DONALD TRUMP ZACH JOHNSON JOHN DALY HALE IRWIN JAY HAAS + MORE AUTOGRAPHED PHOTO) was sold in November 2016 for $449.99 while the cheapest item (Zach Johnson Brewers Signed 2006 Bowman Card) found a new owner for $0.55 in December 2012. The month with the most items sold (21) was July 2015 with an average selling price of $39.99 for an autographed item of Zach Johnson. Sold items reached their highest average selling price in November 2019 with $300.00 and the month that saw the lowest prices with $0.99 was January 2018. In average, an autographed item from Zach Johnson is worth $25.00.

Most recently, these items with a signature of Zach Johnson were sold on eBay - click here for more items.

U.S. names Zach Johnson next Ryder Cup captain as Americans seek first win in Eu (02/28/22): The United States will be led into Italy by a two-time major winner

U.S. to name Zach Johnson next Ryder Cup captain as Americans seek first win in (02/23/22): The United States will be led into Italy by a two-time major winner

2020 U.S. Open: Watch as Zach Johnson could barely believe he made this incredib (09/2020): This is one of the best examples of how nutty the greens are at Winged Foot

Zach Johnson, longtime caddie defend 'humbled' Kuchar's character (02/2019): Zach Johnson and longtime caddie John Wood defended Matt Kuchar's character through tweets on Saturday, both recognizing his recent comments as a mistake and not a defining moment. "After reading (Kuchar's) statement attached, there is no doubt in my mind this is the Kuch we all know and love," John

PGA Tour: Zach Johnson records albatross on 16th hole at Bay Hill (03/2015): Zach Johnson made the second albatross in two days at the Arnold Palmer Invitational by holing a 5-iron from 207 yards on the par-5 16th hole Sunday.

Zach Johnson Hit Into a Pile of Rocks at the Humana Challenge, His Next Shot Did (01/2015): That has to suck.

Zach Johnson shooting for third win at Colonial; Dustin Johnson leads (05/2014): “It just fits my eye,” Zach Johnson said. “You've got to hit every shot - left to right, right to left - your short game has to carry you, the greens are perfect. I love bent-grass greens and these are as good as we'll putt on."

Cink, Zach Johnson to headline Masters Golf Breakfast (01/2014): The breakfast is an annual tradition and draws about 1,000 people each year. It will be held at 7 a.m. April 8 at Warren Baptist Church, 3203 Washington Road.

Zach Johnson finds temporary diversion from golf (08/2013): Zach Johnson didn't play in the first leg of the FedExCup Playoffs last week at The Barclays - he was busy giving a best-man speech at his brother Gabe's wedding.

Zach Johnson decides to withdraw from event in South Korea (04/2013): ZACH JOHNSON: The Iowa native and PGA Tour veteran got plenty of advice and feedback before deciding to withdraw from this week's Ballantine's Championship.

Tumwater grad Zach Johnson not giving up dream of playing in NFL (03/2013): Zach Johnson wants to prove the doubters wrong. It has been his motivation for more than a year.

In the Loop: Zach Johnson, state wrestling, Iowa State athletics (02/2013): Masters champion Zach Johnson is joining the chorus of Olympic fans who are panning the IOC's decision to ditch wrestling.

PGA: Dustin Johnson wins, Zach Johnson 1-under (01/2013): KAPALUA, Hawaii (AP) — Dustin Johnson ended a windy week with a wild ride Tuesday that carried him to the first win of the PGA Tour season. Despite hitting two drives into native areas that cost him three shots, Johnson never lost the lead at Kapalua.

Zach Johnson inspired by family, faith in prosperous 2012 golf season (12/2012): It was a faux pas of the highest order. At least in Zach Johnson's mind. Playing in the first round of the World Challenge on Nov.29 in Thousand Oaks, Calif., television cameras caught the Iowa native uttering a profanity.

Rules Court: Zach Johnson and The Case of the Painted Grass (11/2012): SI Golf Group Rules Court looks at a rules decision from the PGA Tour -- then asks you to make the call!

Zach Johnson splits his Saturday matches at Ryder Cup (09/2012): Some fierce putting by Europeans prevent Johnson and Dufner from moving to 3-0.

Golf Spotlight: Zach Johnson (05/2012): His win at the Colonial on Sunday was his eighth PGA Tour title and first since the 2010 tournament.

Zach Johnson settles for second place in RBC Heritage (04/2012): Zach Johnson had a $615,600 payday. He has not missed a cut this season and has now passed the $1 million mark in earnings in each of his nine full-time seasons on the PGA Tour.

Notebook: For Zach Johnson, not winning didn't mean 2011 season was failure | Ne (12/2011): Winning a PGA Tour event was the only one of his 2011 goals that Zach Johnson didn't accomplish.

Zach Johnson Foundation Classic has a great shot to score well (07/2011): The goal was a birdie. It appears an eagle is now attainable.

My Town: Zach Johnson's Cedar Rapids/Des Moines (06/2011): The lifelong Iowa native has a natural affinity for the Hawkeye State

Zach Johnson puts down the driver, becomes a driver (05/2011): Golfer Zach Johnson’s ear-to-ear grin was readily visible even as he zoomed by in a blur Tuesday on the test track at the BMW Performance Center.

Rick Brown's golf blog: Zach Johnson likely to miss another cut (04/2011): A bogey, triple-bogey finish for Zach Johnson in the second round of the Heritage Friday means he'll likely miss cuts in back-to-back appearances on the PGA Tour for the first time since 2007.