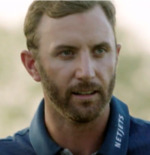 Dustin Hunter Johnson (born June 22, 1984) is an American professional golfer who plays on the PGA Tour. He has won two major championships, the 2016 U.S. Open at Oakmont Country Club with a 4-under-par score of 276 and the 2020 Masters Tournament with a record score of 268, 20-under-par. He had previously finished in a tie for second at both the 2011 Open Championship and the 2015 U.S. Open. He has six World Golf Championships victories, with only Tiger Woods having won more, and he is the first player to win each of the four World Golf Championship events. More about Dustin Johnson

Current items with a signature of Dustin Johnson

These are the most current items with a signature of Dustin Johnson that were listed on eBay and on other online stores - click here for more items.

Traded items with a signature of Dustin Johnson

Most recently, these items with a signature of Dustin Johnson were sold on eBay - click here for more items.

Five Players to Watch at the U.S. Open (06/15/22): They include Dustin Johnson, who was just suspended from the PGA Tour for taking part in the Saudi-backed LIV Golf tour.

Avalanche sweep way to Stanley Cup Final, plus why Dustin Johnson resigning from (06/07/22): The Avalanche have only lost two games in these playoffs

Dustin Johnson, In Field for Rival Golf League, Dropped by Sponsor (06/01/22): The two-time major winner, who had pledged loyalty to the PGA Tour, is among 42 golfers set to play in the first event for a series whose major shareholder is Saudi Arabia’s sovereign wealth fund.

LIV Golf Invitational Series: Why Dustin Johnson's decision makes sense and mone (06/01/22): The field is finally out, and it seemingly begs more questions than it provides answers

PGA Tour responds to players joining LIV Golf as 'disappointed' sponsor hints at (06/2022): Commissioner Jay Monahan has issued a statement about the future of both tours

2022 PGA Championship missed cuts: Scottie Scheffler, Dustin Johnson lead stars (05/2022): Only the top 70 and ties make the cut at the PGA Championship, leaving a number of big names on the outside looking in

2021 Championship at Mayakoba grades: Viktor Hovland goes back to back at Playa (11/2021): Hovland got to three wins in 57 starts faster than Jordan Spieth, Dustin Johnson and Justin Thomas

x2021 Ryder Cup scores, results, takeaways: Dustin Johnson quietly emerges as U. (09/2021): The Americans have built a (seemingly) insurmountable lead with D.J. out in front

2021 WGC-Dell Match Play scores, results, bracket: Dustin Johnson rallies late t (03/2021): It was a tough day for some of the best in the world at Austin Country Club

2021 Tournament of Champions scores: Big-name stars giving chase to solo leader (01/2021): Justin Thomas and Dustin Johnson are among the stars within striking distance on the leaderboard in Kapalua

The next five years of Dustin Johnson's career could land him among the best in (12/2020): D.J. has had an immense five-year run to get to the top of the sport, but the next five are equally as important

Dustin Johnson withdraws from 2020 Zozo Championship field as recovery from COVI (10/2020): D.J. will play just one event between the U.S. Open and the Masters

Led by Dustin Johnson, these four golfers have separated themselves from the pac (08/2020): The quartet has been cleaning up of late as the end of the PGA Tour season arrives this week at East Lake

2020 3M Open: Dustin Johnson withdraws from event in Minnesota with back injury (07/2020): Johnson fired a 78 on Thursday in the opening round of the 3M Open

The clear path for Dustin Johnson to be considered among the 25 greatest golfers (06/2020): With his 21st win coming at the Travelers Championship, D.J. is beginning to enter that rarefied air

Five biggest takeaways from Rory McIlroy and Dustin Johnson's skins victory at S (05/2020): More microphones, more elite courses and a look at the next 15 months of golf

Dustin Johnson planning to skip 2020 Olympics in Tokyo to focus on FedEx Cup (03/2020): For the second consecutive cycle, D.J. won't be in attendance

What are Dustin Johnson's irons worth? (03/2015): You can buy the same TaylorMade irons that Dustin Johnson used to win the WGC-Cadillac Championship for about half of their original retail price.

Dustin Johnson set for PGA Tour return (01/2015): Dustin Johnson will return to the PGA Tour at next month's Farmers Insurance Open in San Diego, ending a six-month leave of absence from golf to seek help for "personal challenges".

Dustin Johnson, Paulina Gretzky welcome baby boy (12/2014): Paulina Gretzky took to Instagram on Thursday, Christmas Day, to announce that she and fiance Dustin Johnson are expecting a baby boy. Gretzky, the 26-year-old daughter of hockey legend Wayne Gretzky, first announced that she was pregnant in September.

Dustin Johnson is spending his time caddying for Paulina Gretzky (08/2014): He's not competing for the PGA Championship but apparently he isn't taking a complete break from golf, either.

Dustin Johnson Takes Colonial Lead (05/2014): Dustin Johnson played Colonial only once before, six years ago when he didn't even make it to the final round. In his return, Johnson took a one-stroke lead after the first round.

Dustin Johnson comes to Grand Strand (02/2014): WPDE Sports talks to 10th ranked golfer in the world about his hot start to the 2014 season and chasing his first major championship

Famous girlfriend no disctraction to golfer Dustin Johnson (01/2014): Investigators are back on the job Friday sifting through icy rubble to try to locate more victims of a fire that destroyed a seniors' residence in Quebec.

Dustin Johnson wins BMW Championship to end string of Sunday disappointments (10/2013): Dustin Johnson had played in the final group on Sunday three times this summer and lost each time. This time, however, he prevailed.

Paulina Gretzky engaged to golfer Dustin Johnson (08/2013): Daughter of hockey great Wayne Gretzky and PGA Tour player have been an item since January.

RBC Canadian Open 2013 results: Dustin Johnson, Matt Kuchar settle for 2nd at Gl (07/2013): Thanks to a stable of golfers under the title's sponsor's endorsement umbrella, the 2013 RBC Canadian Open had as deep a field as you'll see for and event the week after a major.

PGA Tour Confidential: Rory McIlroy's Nike deal, Dustin Johnson's outlook, more (01/2013): This week Rory McIlroy will begin his new endorsement deal with Nike. Will he struggle this year while adjusting to new gear? Our panel debates this, the American poised to win the most in '13, Europe's next Ryder Cup captain, Tiger's schedule and more.

SC Native Dustin Johnson wants to make this a special week at Kiawah (08/2012): There are plenty of Palmetto State golfers in the field at the PGA Championship, the one with the most expectations on him - Dustin Johnson.

Dustin Johnson and SF Giants hit golf balls at park (06/2012): Splash hits became a matter of course before the Giants took batting practice Wednesday afternoon. Of course, it's a little easier reaching McCovey Cove using a driver to hit a golf ball than using a bat to hit a...

Dustin Johnson returns at Memorial with lots of catching up to do for Ryder Cup (05/2012): Dustin Johnson was No. 4 in the Ryder Cup standings when the season began, but has fallen to No. 24 because of his inactivity.

Golf: Bad back knocks Dustin Johnson out of Masters (04/2012): Troublesome back knocks him out of season's first major

Dustin Johnson has figured out Pebble Beach (02/2012): Stop us if this sounds familiar: Dustin Johnson sits atop the leaderboard at Pebble Beach. Johnson won the AT&T in 2009 and 2010. He also held the 54-hole lead in the U.S. Open at Pebble, before imploding in the final...