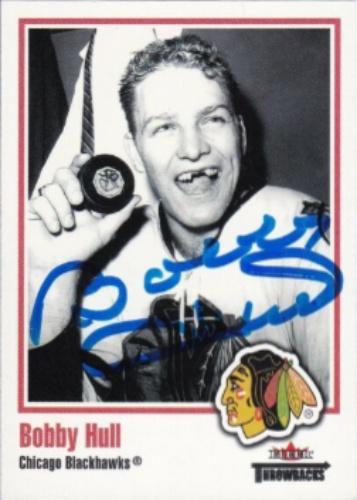 Robert Marvin Hull OC (January 3, 1939 – January 30, 2023) was a Canadian professional ice hockey player who is widely regarded as one of the greatest players of all time. His blonde hair, skating speed, end-to-end rushes, and ability to shoot the puck at very high velocity all earned him the name "The Golden Jet". His talents were such that an opposing player was often assigned just to shadow him. More about Bobby Hull

Current items with a signature of Bobby Hull

These are the most current items with a signature of Bobby Hull that were listed on eBay and on other online stores - click here for more items.

Traded items with a signature of Bobby Hull

If you're interested in Bobby Hull Rookie cards you might want to take a look at our sister site that specializes in Hockey Rookie Cards only.

Most recently, these items with a signature of Bobby Hull were sold on eBay - click here for more items.

Hall of Famer Hull, the Golden Jet, dies at 84 (01/30/23): Hockey Hall of Famer Bobby Hull has died at the age of 84, the Chicago Blackhawks announced Monday.

Chicago Blackhawks end Hall of Famer Bobby Hull's role as team ambassador (02/21/22): 'We jointly agreed earlier this season that he will retire from any official team role,' the team said

Hockey prepped Hull’s Bobby Allen for business world - The Boston Globe (01/24/19): The former All-American defenseman at BC works in investments and coaches youth and high school hockey in Hingham.

Steen robocalling with message from Bobby Hull (10/2014): On his route to what he hopes will be re-election, Thomas Steen is hopping on the Golden Jet.

Fanspeak: Bobby Hull voted greatest Blackhawk in franchise history (08/2014): Give it a few more years and this might change.

Chicago Blackhawks Superfan Paints for Legend Bobby Hull (05/2013): Imagine your wildest dreams as a Chicago Blackhawks fan. Would they include meeting the legendary Bobby Hull, watching the Hawks win the Stanley Cup, and a house full of autographed memorabilia? For superfan Brian Turnbough, putting his talent with painting to work was enough to achieve all that.

Media Alert - Target and Special Guests Dennis and Bobby Hull to Host a Special (12/2012): MISSISSAUGA, ON, Dec. 10, 2012 /CNW/ -          What: Winnipeg-area residents will be treated to a holiday event to remember when the Target Road Trip caravan pulls into Red River Exhibition Park. On Tuesday, ...

Bobby Hull, Ben Hatskin got WHA off the ground (10/2012): There would be no NHL in the city today, no Winnipeg Jets old or new, were it not for two people: Ben Hatskin and Bobby Hull.

Bobby Hull had few equals among the Jets (10/2011): Hall-of-Famer ‘must have had buyer’s remorse’ when he saw WHA club’s lack of talent, former teammate says

PHT: Kane to wear No. 9? He'll ask Bobby Hull (07/2011): Despite being a player who only received limited exposure during his first two seasons with the Atlanta Thrashers, Evander Kane has already made a positive impression on hockey fans.

Sports Digest: Bobby Hull to appear at Bridges on Wednesday (04/2011): Blackhawks Hall of Famer Bobby Hull will appear Wednesday night at Bridges Scoreboard Lounge in Griffith prior to the team's playoff opener in Vancouver.

NHL Hall of Famer Bobby Hull to visit Saturday at MetroCentre (02/2011): ROCKFORD — Rockford IceHogs players get all excited when discussing Bobby Hull’s appearance at Saturday’ night’s game. Even if most of them know more about his son, Brett.

CHICAGO - Bobby Hull, Stan Mikita, Glenn Hall and Pierre Pilote each got a loud (01/2011): The Chicago Blackhawks have four Stanley Cup titles now, but they still have plenty of love for their third title-winning team.