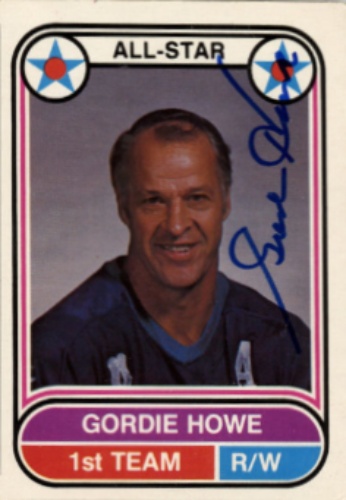 Gordon Howe OC (March 31, 1928 – June 10, 2016) was a Canadian professional ice hockey player. From 1946 to 1980, he played 26 seasons in the National Hockey League (NHL) and six seasons in the World Hockey Association (WHA); his first 25 seasons were spent with the Detroit Red Wings. Nicknamed "Mr. Hockey", Howe is often considered the most complete player to ever play the game and one of the greatest of all time. At his retirement, his 801 goals, 1049 assists, and 1850 total points were all NHL records that stood until they were broken by Wayne Gretzky, who himself has been a major champion of Howe's legacy. A 23-time NHL All-Star, he still holds the NHL record for seasons played, and his all-time NHL games played record of 1,767 was only surpassed in 2021 by Patrick Marleau. In 2017, Howe was named one of the "100 Greatest NHL Players". More about Gordie Howe

Current items with a signature of Gordie Howe

These are the most current items with a signature of Gordie Howe that were listed on eBay and on other online stores - click here for more items.

Traded items with a signature of Gordie Howe

If you're interested in Gordie Howe Rookie cards you might want to take a look at our sister site that specializes in Hockey Rookie Cards only.

Most recently, these items with a signature of Gordie Howe were sold on eBay - click here for more items.

How Ovechkin's newest record helps cement his legacy (11/06/22): With goal No. 787, Ovi passed Gordie Howe for most goals with a single team, further establishing his place in Washington sports history.

Gordie Howe's journey back from severe stroke (04/14/15): LUBBOCK, Texas -- Ravaged by a stroke that left him unable to walk and barely able to speak, Gordie Howe decided it was time to quit.

Experimental treatment pulled Gordie Howe from death’s door (04/14/15): LUBBOCK, Texas — Ravaged by a stroke that left him unable to walk and barely able to speak, Gordie Howe decided it was time to quit. His sons didn’t want...

Hockey great Gordie Howe makes gritty fight back from stroke (04/14/15): LUBBOCK, Texas (AP) — Ravaged by a stroke that left him unable to walk and barely able to speak, Gordie Howe decided it was time to quit.

Hometown crowd pays tribute to Gordie Howe (02/2015): SASKATOON - Wayne Gretzky figures there is no photograph fans ask him to sign more often than the one of him as a smiling preteen beside his idol Gordie Howe, who is playfully hooking a hockey stick around the future Great One's neck.

Mark Howe: 'Gordie Howe's Son A Hall of Fame Life in the Shadow of Mr. Hockey' (01/2014): No one ever accused hockey players of being delicate flowers, but on one occasion, a player was stupid enough to intentionally hurt Marty when his brother and father were on the ice. You can’t help but feel that guy should have been taken to task for stupidity alone.

Manning with Gordie Howe Hat Trick in 5-4 Road Win (12/2013): Brandon Manning scored two goals and notched his second career "Gordie Howe Hat Trick" as the Phantoms pulled out a wild 5-4 victory at the Norfolk Admirals on Friday night. It was also the first multi-goal game in Manning's career.

Ticker: Mr. Hockey Gordie Howe still king of Detroit sports nicknames (07/2013): Goodman thinks Michigan's Trey Burke is in position to make something happen soon for the Jazz because they 'get a heady, high-character floor leader whose game translates to the next level.'

Yeah, Wayne was the ‘Great Gretzky,’ but Gordie Howe will always be ‘Mr. Hockey’ (04/2013): Gordie Howe, known worldwide as "Mr. Hockey" because of his unprecedented accomplishments he achieve...

Blackhawks crush Wings 7-1 on Gordie Howe 's 85th birthday (03/2013): The Red Wings did their best to keep that attention focused somewhere else Sunday on their return home. They failed to get anything going while losing 7-1 to Chicago before a national-television audience.

Gordie Howe: superbly skilled and scary (02/2013): Once upon a time, the well-placed elbow was not as heavily scrutinized as it is today.

Red Wings flashback: A look at Gordie Howe (10/2012): The NHL is in a deep freeze thanks to a labor dispute, but here at the Free Press, hockey is always on the hearth. So until there are Red Wings games on the horizon, we present Flashback Features.

Gordie Howe, Daryl Sitter among those expected for 2013 Winter Classic alumni ga (07/2012): DETROIT (AP) -- Next season's Winter Classic between the Detroit Red Wings and Toronto Maple Leafs will include two alumni games and around 100 players from the storied franchises.

Gordie Howe visits Kitchener for fundraisers (05/2012): Hockey has changed considerably since “Mr. Hockey” Gordie Howe was last on the ice, but if there is one thing that is actually gone for good from the National Hockey League, it’s an ambidextrous player.

Manning with Gordie Howe Hat Trick (02/2012): Rookie defenseman Brandon Manning lit up the Manchester Monarchs with a fight, a goal and an assist for the rare feat of a "Gordie Howe Hat Trick" as the Adirondack Phantoms blasted their way to a 5-1 victory Friday night at the Glens Falls Civic Cente

Gordie Howe and the Grey Cup on Wednesday (01/2012): Kamloops, BC - The Kamloops Blazers will have hockey legend Gordie Howe in attendance on Wednesday, February 1st when the Blazers host the Spokane Chiefs.

Tears of joy for Gordie Howe as son joins him in the Hockey Hall of Fame (11/2011): Legend on hand as 2011 inductees Doug Gilmour, Mark Howe, Joe Nieuwendyk and Ed Belfour get their rings

Video: Gordie Howe hosts fundraiser (05/2011): Gordie Howe lunched with other NHL greats ahead of the Scotiabank Pro-Am charity hockey tournament that runs Friday and Saturday. More than 50 former NHL players will play in the tournament.

Banner Raising One More Chance To Salute Gordie Howe (03/2011): They began lining up more than an hour in advance, and by the time the Howes arrived with Mr. Hockey, the XL Center's atrium was a mass of fans, mostly in green.

Aeros to Host "Mr. Hockey" Gordie Howe on January 21 (01/2011): HOUSTON --- The Houston Aeros of the American Hockey League (AHL), primary affiliate of the Minnesota Wild (NHL), will host Hockey Hall of Famer Gordie Howe at the Jan. 21 game vs. the Texas Stars.