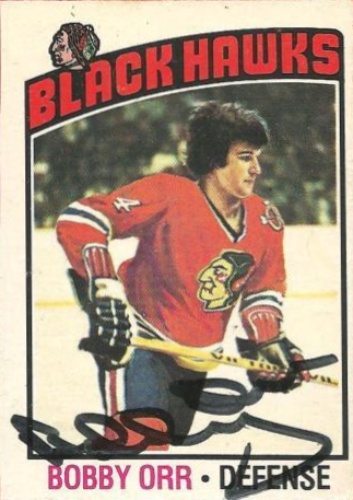 Robert Gordon Orr OC (born March 20, 1948) is a Canadian former professional ice hockey player, widely acknowledged as one of the greatest of all time. Orr used his ice skating speed, scoring, and play-making abilities to revolutionize the position of defenceman. He played in the National Hockey League (NHL) for 12 seasons, the first 10 with the Boston Bruins, followed by two with the Chicago Black Hawks. Orr remains the only defenceman to have won the league scoring title with two Art Ross Trophies. He holds the record for most points and assists in a single season by a defenceman. Orr won a record eight consecutive Norris Trophies as the NHL's best defenceman and three consecutive Hart Trophies as the league's most valuable player (MVP). Orr was inducted into the Hockey Hall of Fame in 1979 at age 31, the youngest to be inducted at that time. In 2017, Orr was named by the National Hockey League as one of the "100 Greatest NHL Players" in history. More about Bobby Orr

Current items with a signature of Bobby Orr

These are the most current items with a signature of Bobby Orr that were listed on eBay and on other online stores - click here for more items.

Traded items with a signature of Bobby Orr

If you're interested in Bobby Orr Rookie cards you might want to take a look at our sister site that specializes in Hockey Rookie Cards only.

Most recently, these items with a signature of Bobby Orr were sold on eBay - click here for more items.

The iconic hockey moments that should be statues: Bobby Orr has one, who should (05/07/20): What signature moments from hockey history should be immortalized outside of arenas? Here are our picks.

Hockey great Bobby Orr signs on to Staal Open THUNDER BAY (04/03/15): As if the event’s namesakes were not enough, Hockey Hall of Fame legend Bobby Orr will lend his support to the Staal Foundation Open this summer. Orr will be at Whitewater Golf Club July 14 and 15 participating in events to support the tournament’s charity efforts.

‘Full House’ Star Dave Coulier on Skating with Bruins Legend Bobby Orr (02/2015): Coulier, who’s performing at Laugh Boston this weekend, spoke with Boston.com about what it was like to meet his sports idol, why the woodchuck is his spirit animal, and what’s next for the former Uncle Joey.

Around the Seawall: Canuckland says goodbye to Pat Quinn; Darcy Tucker trolls Al (11/2014): Also: Joffrey Lupul and the Toronto Maple Leafs want to make the playoffs this year. But is hope really a strategy?

Seth Griffith looks like Bobby Orr in acrobatic goal (10/2014): If you watched the highlights of Tuesday night's Bruins-Wild contest, it might have felt a bit like 1970.

10 Interesting Facts About Bobby Orr (06/2014): Bobby Orr is one of the greatest hockey players of all time. Here are 10 interesting facts about him. Contributor: Tom Harrington Published: Jun 13, 2014

NHL legend Bobby Orr has goal with his book | Poll (01/2014): Spend a few minutes in Bobby Orr’s home in Jupiter and it doesn’t take long to realize that something’s missing.

ARMCHAIR BOOK CLUB: Bobby Orr scores with My Story (12/2013): Bobby Orr’s life is the quintessential Canadian story. He grew up in a working class North Ontario town where he and his friends played shinny for hours. When he wasn’t on the lake, Orr was shooting pucks at the back of his garage, all the while dreaming of the day he’d hoist the Stanley Cup.

Bobby Orr Admits to Feeling of ‘Emptiness’ After Being Forced Into Retirement at (11/2013): One of the greatest injustices in sports history is the fact that Bobby Orr was forced to retire at the age of 30, presumably leaving the better part of a decade of playing years on the table. Orr had no choice, of course, after knee injuries did him in. That was in large part due […]

Book Review: 'Orr: My Story' by Bobby Orr (10/2013): For hockey fans, Bobby Orr's book is a must read! THE PAST  Bobby Orr has put his story to paper. It is something that fans have wanted for years, but few believed would ever happen. And the story, like the...

At 65, Number 4, Bobby Orr, is still Number 1 (09/2013): Bobby Orr is 65 now and still widely considered the greatest hockey player who ever lived. But if a man’s true greatness can be measured by the deeds he does when no one is looking, then Orr has forged a transcendent legacy by bringing light to the dark corners of the world around him.

Bobby Orr is right: Shame on the NHL and the players (11/2012): No description available

Bobby Orr says hockey has to be fun before anything else (10/2012): Bobby Orr says he was never "pushed" by his father to make the NHL. His dad's advice: "Go out and have some fun and we'll see what happens."

Bobby Orr wants the players to get a fair deal (08/2012): The Bruins' legend isn't happy with the owners.

Bobby Orr: Minor hockey should be fun for kids (07/2012): As his agent, Bobby Orr has a special fondness for Jason Spezza, which is why he would fairly bristle when Spezza would get beaten up his critics, which used to happen quite often around Ottawa.

Meeting with Bobby Orr lifted his spirits (05/2012): At Thursday night’s fundraiser for him in Randolph, Hingham High senior hockey player James Gordon, who is battling cancer, still was raving about Hockey Hall of Famer Bobby Orr paying him a recent visit.

Bobby Orr’s Blackhawks Career Could Be Warning For Peyton Manning In Denver (03/2012): It's important for everyone to take a long, deep breath of Mile High air and remember that this might not work out.

Tie maker looks to score with Bobby Orr designs (02/2012): One of the most famous hockey images of all time - that of Boston Bruins legend Bobby Orr flying horizontally through...

Nobody can stickhandle like Bobby Orr (07/2011): Catching up with a legend

Bobby Orr, Cassie Campbell-Pascall speak out against hockey violence (06/2011): — The strides may be slower than in 1970, but the legendary Bobby Orr was beaming as he skated beside pint-sized minor hockey players on Saturday.