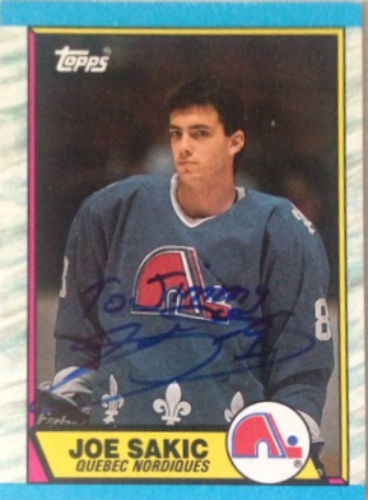 Joseph Steven Sakic (/ˈsækɪk/; born July 7, 1969) is a Canadian professional ice hockey executive and former player. He played his entire 21-year National Hockey League (NHL) career with the Quebec Nordiques/Colorado Avalanche franchise. Named captain of the team in 1992 (after serving as a co-captain in 1990–91), Sakic is regarded as one of the greatest team leaders in league history and was able to consistently motivate his team to play at a winning level. Nicknamed "Burnaby Joe", Sakic was named to play in 13 NHL All-Star Games and selected to the NHL First All-Star Team at centre three times. Sakic led the Avalanche to Stanley Cup titles in 1996 and 2001, being named the most valuable player of the 1996 playoffs, and honoured as the MVP of the NHL in 2001 by the hockey writers and his fellow players. He is one of six players to participate in the first two of the team's Stanley Cup victories, and won a third Stanley Cup with the Avalanche in 2022 while serving as the team's general manager. Sakic became only the third person, after Milt Schmidt and Serge Savard, to win a Stanley Cup with the same franchise as a player and general manager. More about Joe Sakic

Current items with a signature of Joe Sakic

These are the most current items with a signature of Joe Sakic that were listed on eBay and on other online stores - click here for more items.

Traded items with a signature of Joe Sakic

If you're interested in Joe Sakic Rookie cards you might want to take a look at our sister site that specializes in Hockey Rookie Cards only.

Most recently, these items with a signature of Joe Sakic were sold on eBay - click here for more items.

Joe Sakic wins 2022 NHL GM of the year award (07/08/22): Colorado Avalanche general manager Joe Sakic is the winner of the 2022 NHL General Manager Of The Year Award on Thursday night.

Avs franchise fortunes aren't MacKinnon's to shoulder alone (06/17/22): An offseason chat with his boss, Avalanche general manager Joe Sakic, helped the Colorado center realize he didn’t have to lug around the franchise’s fortunes and weight of hefty expectations squarely on his shoulders. “Nate is giving up probably playing the way he’s always played to make sure that

Trade with the Avalanche at your own risk (06/08/22): GM Joe Sakic has used blockbuster trades over the past four years to build one of the NHL's best teams.

How Joe Sakic built the Avalanche into a perennial Stanley Cup contender (01/2021): From landing Nathan MacKinnon and Cale Makar, to moving Matt Duchene, to savvy deals for key players, GM Joe Sakic brought the Avs from the cellar to among the elite.

The five NHL teams that had sneaky good offseasons (11/2020): Many have heaped praise upon Avalanche GM Joe Sakic for his work this fall. Here are the teams whose improvement went under the radar.

Joe Sakic: Avalanche doesn't expect major deal before trade deadline (03/2015): Speaking a little more than 40 hours before the NHL trading deadline, Avalanche general manager Joe Sakic on Saturday night made it clear Colorado isn't looking to make a major deal involving any of its young core players or to give up prospects or draft choices for short-term help.

Joe Sakic joins Avalanche practice in preparation for old-timer's game (11/2014): Joe Sakic took to the ice Friday at the Prudential Center, because he's got a game to play in two days.

Joe Sakic draws parallel between current Avs, Nordiques of his youth (04/2014): The excitement in Joe Sakic's voice was just as well expressed on his face. The former Avalanche captain, now the team's executive vice president of hockey operations, is jazzed about the team being in the playoffs again.

Joe Sakic says Winter Olympics can improve NHL players (02/2014): Joe Sakic played in three Olympiads for Team Canada and was the most valuable player in the Canadians' gold-medal showing at the Salt Lake

Joe Sakic promises renewed work ethic from Colorado Avalanche (09/2013): Joe Sakic knows a lot of the old faithful in the Avalanche fan base broke up with the team in recent years and not just because it lost a lot, but how it lost.

Joe Sakic hosting golf tournament for Food Bank of the Rockies (07/2013): DENVER — Hockey legend Joe Sakic stops by the studios to talk about his celebrity golf tournament and hockey season.

Kiszla: Joe Sakic gets another big shot for Colorado Avalanche (06/2013): Here in Colorado, we count on Joe Sakic to deliver the Stanley Cup. Sunday, we find out if Super Joe can deliver again.

Frei: Avalanche's Joe Sakic had better be the boss, not friend of Patrick Roy (05/2013): As a coach, Patrick Roy is going to be emotional, short-fused and over the top at times. That's far from unprecedented in the NHL.

Paige: Avs should go with Joe Sakic, George Gwozdecky running the show (04/2013): The Avs are slush puppies on fractured ice.With a bottom-of-the-league mark of 34 abysmal points, the Avalanche will set a team record for stinking and failing to reach the playoffs for a third consecutive year.

Graphic: Joe Sakic's stellar wrist shot (11/2012): Joe Sakic, who will enter the Hockey Hall of Fame on Monday in Toronto, was known for having one of the best wrist shots in NHL history.

Treasure hunt item #2 – Joe Sakic TV Guide *Found (09/2012): Next item to scavenge for: the very rare Joe Sakic TV Guide, from 1996. Clue: There are lots of trees and shrubs around the parking lot of the Safeway at 128th Ave and Zuni, in Thornton. Might be something hidden in one of them. *Item has been found.

Celebrity golf video: Joe Sakic (07/2012): Joe Sakic talks about his chances of hitting another hole-in-one worth $1 million during the celeb-am portion of the American Century Championship at Edgewood Tahoe Golf Course on Thursday, July 19, 2012.

Captain Joe Sakic Selected To Hockey Hall Of Fame (06/2012): Joe Sakic, the stylish center who spent his entire 20-year NHL career with the Quebec Nordiques-Colorado Avalanche franchise, parlayed passion into a berth in the Hockey Hall of Fame.

Joe Sakic Hole In One: Former NHL Star Wins 1 Million Dollars (07/2011): Here's another hole in one made over the weekend that didn't happen in the British Open. Joe Sakic, former Colorado Avalanche star, made an ace on the 17th hole at the American Century Celebrity Golf Championship which happened to win him $1 million from the tournament sponsor.

Joe Sakic Talks About His New Role With The Avs (04/2011): Time will tell exactly what role Sakic will play in trying to bring the organization back to prominence in the NHL.