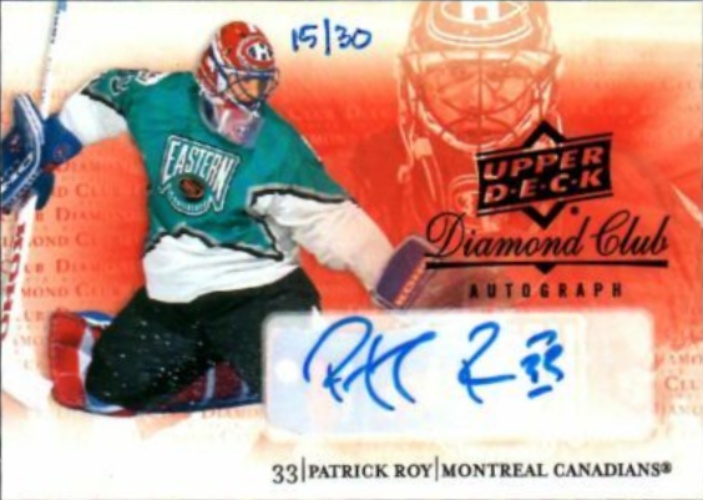 Patrick Jacques Roy (born October 5, 1965) is a Canadian former professional ice hockey goaltender and executive, who serves as the head coach for the Quebec Remparts of the Quebec Major Junior Hockey League (QMJHL). In 2017, Roy was named one of the 100 Greatest NHL Players in history. More about Patrick Roy

Current items with a signature of Patrick Roy

These are the most current items with a signature of Patrick Roy that were listed on eBay and on other online stores - click here for more items.

Traded items with a signature of Patrick Roy

If you're interested in Patrick Roy Rookie cards you might want to take a look at our sister site that specializes in Hockey Rookie Cards only.

The most expensive item with a signature of Patrick Roy (Rare SIGNED Full Size Lefevre KOHO PATRICK ROY 2001 Champions Goalie Mask~Sweet!) was sold in July 2022 for $4000.00 while the cheapest item (Patrick Roy Autographed Photo Index Card) found a new owner for $0.25 in August 2019. The month with the most items sold (39) was March 2021 with an average selling price of $92.04 for an autographed item of Patrick Roy. Sold items reached their highest average selling price in April 2011 with $456.00 and the month that saw the lowest prices with $0.99 was May 2011. In average, an autographed item from Patrick Roy is worth $44.88.

Most recently, these items with a signature of Patrick Roy were sold on eBay - click here for more items.

Roy still 'emotional' over Remparts' ouster, will take time to decide future (06/08/22): QUEBEC — Still emotional over the Remparts' ouster from the Quebec Major Junior Hockey League post-season, head coach and general manager Patrick Roy says he is undecided about his future with the team. Roy made the comments at the team's end of season press conference at the Vidéotron Centre on Wed

Patrick Roy: ‘We’re Going To Benefit From This Season’ (04/05/15): The Colorado Avalanche will finish the season with three home games this week against teams that, unlike the Avs, still have something to play for.

Bruce Boudreau, Patrick Roy "come from different circles" (04/03/15): Bruce Boudreau played only 141 games in the NHL, but he was a genuine AHL superstar.

Patrick Roy stresses the Avalanche are not giving up on playoff hopes (04/03/15): Going into Friday night's game against the Anaheim Ducks at the Honda Center, the Avalanche still is eight points out of the final Western Conference playoff spot - but the team in that spot had changed.

Bruce Boudreau, Patrick Roy "come from different circles" (04/2015): Bruce Boudreau played only 141 games in the NHL, but he was a genuine AHL superstar.

Colorado Avalanche coach Patrick Roy pulls goalie with 12 minutes left and it do (02/2015): The legendary goalie decided to follow a path that he has already blazed. With more than 12 minutes left — and down by three — Roy pulled his goaltender

Avs will accept "boring" if it means more goals, Patrick Roy says (12/2014): The first step for the Avalanche to get back on a scoring run, according to coach Patrick Roy, is to get boring.

Frei: Patrick Roy's feud with Canadiens is long gone (11/2014): Saturday will be the 19th anniversary of when Patrick Roy took the phone call from new Montreal Canadiens general manager Rejean Houle and heard that he had been traded to the Avalanche.

Patrick Roy describes the Xs and Os behind the Avalanche's problems (10/2014): The Colorado Avalanche have just two victories in their first 10 games. And already, Patrick Roy is tired of talking about it. But he described the issues.

Patrick Roy, Joe Sakic headed to Avs' birthplace (09/2014): His humbleness Joe Sakic is heading to Quebec City, where he played the first seven years of his Hockey Hall of Fame career, as the top day-to-day executive for the franchise formerly known as the Nordiques.

Patrick Roy glad Avs home for Game 7 vs. Minnesota Wild (04/2014): The NHL hadn't seen a Game 7 triple-header in the past 10 years, and the Avalanche hadn't been a part of a Game 7 since 2003. Wednesday night was a big night for the league and its team from Colorado.

P.A. Parenteau given night off by Patrick Roy (01/2014): P.A. Parenteau came back from his injury three weeks earlier than expected, but coach Patrick Roy opted to give him a little more rest Monday by scratching him from the Avalanche's lineup.

Patrick Roy said his goalie should be “flattered” by Dustin Byfuglien cheap shot (12/2013): Avs coach Patrick Roy, the Hall of Fame goalie of course, said that and much, much more. He thought Varlamov should feel “flattered.”

Avalanche coach Patrick Roy wants Ryan Wilson back in better shape (11/2013): If Ryan Wilson is to make it back to the Avalanche lineup, he will need to be in the best shape of his life.

Patrick Roy decides to give young defenseman a try at left wing (10/2013): Avalanche coach Patrick Roy would rather reward a player for his patience and team-first attitude than add another body to his 10-1 team.

Patrick Roy shows fire, polish while accepting new "challenge" for Avs (05/2013): Lunch Special: Each weekday near noontime, a Denver Post sports writer dares to dish. In this installment, Adrian Dater sees that Patrick Roy has a great chance to succeed as Avalanche coach.

Patrick Roy apparently not in coaching plan for Avalanche (04/2013): The Avalanche remains without a coach. Since firing Joe Sacco on Sunday, the team has given no clues about who will be their next coach, or even how it is conducting the search.

Patrick being Patrick : Roy blasts Tigres assistant for chirping (02/2013): Patrick Roy was at it again Saturday night. In the press conference following his Quebec Remparts’ 3-1 win over the Victoriaville Tigres, the NHL hall-of-famer was up to his old tricks, this time calling out Tigres assistant coach Carl Mallette. … Continue reading →

Patrick Roy sticks up for Grigorenko (06/2012): “When people question his work ethic, it's not true, he works hard all the time."

Brodeur will be chasing Patrick Roy throughout Cup finals (05/2012): Devils goalie has a chance to match -- and break -- some of Roy's more notable records.

Serge Savard talks to Patrick Roy about “his intentions” (04/2012): The GM search continues.

Bear Essentials: Could Canadiens Hire Patrick Roy As Head Coach? (12/2011): The struggling Montreal Canadiens are looking for answers, but does hiring Patrick Roy make sense for them?

Patrick Roy fined by QMJHL for comments about rival GM (04/2011): Please read the full story on TSN.ca for the latest details