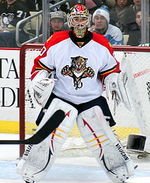 Current items with a signature of Jose Theodore

These are the most current items with a signature of Jose Theodore that were listed on eBay and on other online stores - click here for more items.

Traded items with a signature of Jose Theodore

The most expensive item with a signature of Jose Theodore (Jose Theodore Colorado Avalanche Signed Itech Game Used Stick COA) was sold in October 2021 for $599.95 while the cheapest item (1994 Signature Rookies Jose Theodore #'D) found a new owner for $0.01 in December 2008. The month with the most items sold (10) was March 2010 with an average selling price of $12.00 for an autographed item of Jose Theodore. Sold items reached their highest average selling price in October 2021 with $599.95 and the month that saw the lowest prices with $0.20 was June 2011. In average, an autographed item from Jose Theodore is worth $9.99.

Most recently, these items with a signature of Jose Theodore were sold on eBay - click here for more items.

Olympic Hockey Trivia: Legendary quotes, famous saves (02/02/22): On the latest episode of Zone Time, Julian hosts an impromptu Olympic hockey trivia game. Does José Théodore have an Olympic gold medal? Did Canada win the first gold medal in women's hockey? The Zone Time crew also take a midseason moment to reflect on predictions they made but would like to take

Report: Three teams checking in on Jose Theodore (09/26/13): He's coming off an injury-shortened season in Florida.

Boston Bruins to sign Jose Theodore to backup Rask (08/20/13): Goalie Jose Theodore could be on the verge of signing with the Boston Bruins, according to TVA Sports. The 36-year-old Theodore reportedly will sign a one-year deal worth between $800,000 and $1.1 million to serve as Tuukka Rask's backup.

Florida Panthers face decisions on Stephen Weiss, Jose Theodore (07/01/13): Now that the draft is over and it is officially July, the Panthers have some work to do.

Florida Panthers’ Jose Theodore seeking clarity (04/2013): Jose Theodore wants to play in one of the 10 remaining games this season to bolster his confidence heading into offseason training.

ST. PAUL, Minn. - Jose Theodore and the Florida Panthers let a point slip away. (03/2012): Trying to pull five points ahead of the Washington Capitals in the Atlantic Division with a game in hand and five to play, Florida led Minnesota by one in the final minute.

Florida's Jose Theodore made 26 saves in his first appearance since Jan. 20 afte (02/2012): The Panthers' quick-strike offence supported Theodore with two goals off faceoffs and four unanswered goals overall to erase a 1-0 deficit. Frans Nielsen scored the Islanders' goal on the team's first shot at 3:35 of the first.

Jose Theodore disliked role with Minnesota Wild, tried to be 'good teammate' (07/2011): MIAMI - When Tomas Vokoun turned down the Florida Panthers' final contract offer June 30, the team made it clear they would be moving on.

Jose Theodore making a case to become the Wild's No. 1 goalie (03/2011): NEW YORK — Jose Theodore is becoming the man of the hour for the Wild.

DENVER - Even on the road, Minnesota's Andrew Brunette and Jose Theodore felt ri (02/2011): It wasn't all that difficult, especially since both players spent parts of three seasons with the Colorado Avalanche. Brunette scored twice and Theodore stopped 38 shots in his return to goal, helping the Wild hold off a rusty Avalanche squad for a 4-3 win on Thursday night.

Wild goalie Jose Theodore talks: 'You're the youngest, so you go in net' (01/2011): If I could change places for a day with anyone, it would probably be my wife, Stephanie. Then I could see what it's like to live with me. I could see if I'm a great guy or really good, or if she's complaining for no reason. I'd like to see that.