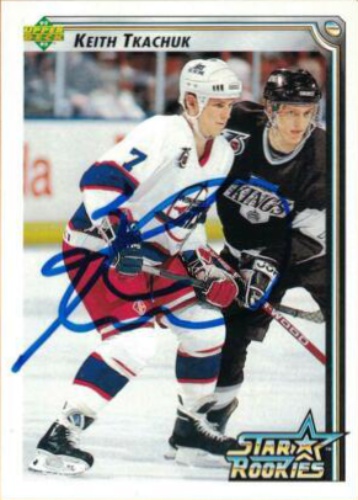 Keith Matthew Tkachuk (/kəˈtʃʌk/; born March 28, 1972) is an American former professional ice hockey player who played in the National Hockey League (NHL) in a 18-year career with the Winnipeg Jets/Phoenix Coyotes, St. Louis Blues and Atlanta Thrashers, retiring in 2010. His sons Matthew and Brady play for the Calgary Flames and the Ottawa Senators, respectively. He is one of five American-born players to score 500 goals, and is the sixth American player to score 1,000 points. He is considered to be one of the greatest U.S.-born players in NHL history. More about Keith Tkachuk

Current items with a signature of Keith Tkachuk

These are the most current items with a signature of Keith Tkachuk that were listed on eBay and on other online stores - click here for more items.

Traded items with a signature of Keith Tkachuk

Most recently, these items with a signature of Keith Tkachuk were sold on eBay - click here for more items.

Film Room: Senators rookie Brady Tkachuk has his father's qualities (12/13/18): Just 21 games into his NHL career, Brady Tkachuk is drawing comparisons to another talented but truculent winger - one he knows quite well.Brady's father, Keith, potted 538 goals in parts of 18 NHL seasons and was as well-known for his physical play as he was for his scoring prowess. And there are p

Keith Tkachuk enters Coyotes' Ring of Honor (12/23/11): As Keith Tkachuk stood at center ice, gazing up to the north corner of Jobing.com Arena while a banner adorned with his prized No. 7 was unveiled, he wore the same serious expression he carried into battle when he was a Coyote.

It's good to have Keith Tkachuk entering the Phoenix Coyotes' Ring of Honor (12/22/11): Boivin: Ex-Coyote Keith Tkachuk was not only a gifted power forward. He was a personality, too, that helped make hockey relevant in the Southwest. He will enter the team's Ring of Honor on Friday.