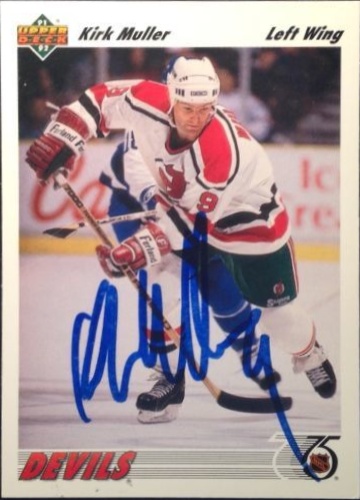 Kirk Christopher Muller (born February 8, 1966) is a Canadian former professional ice hockey winger who played in the National Hockey League for 19 seasons from 1984–85 until 2002–03. He was also the head coach of the National Hockey League's Carolina Hurricanes from 2011 to 2014. He was an associate coach with the Montreal Canadiens from 2016 to 2021, where he previously served as assistant coach from 2006 to 2011. More about Kirk Muller

Current items with a signature of Kirk Muller

These are the most current items with a signature of Kirk Muller that were listed on eBay and on other online stores - click here for more items.

Traded items with a signature of Kirk Muller

The most expensive item with a signature of Kirk Muller (KIRK MULLER SIGNED MONTREAL CANADIENS 93 CUP JERSEY JSA) was sold in May 2011 for $299.99 while the cheapest item (1990-91 Bowman Kirk Muller Signed Auto Autograph Devils #82) found a new owner for $0.25 in April 2021. The month with the most items sold (10) was June 2012 with an average selling price of $8.99 for an autographed item of Kirk Muller. Sold items reached their highest average selling price in April 2019 with $139.99 and the month that saw the lowest prices with $0.99 was September 2008. In average, an autographed item from Kirk Muller is worth $7.46.

Most recently, these items with a signature of Kirk Muller were sold on eBay - click here for more items.

NHL rumors: Flyers 'interested' in Flames assistant Kirk Muller (05/25/22): As the Flyers continue to look for the team's next head coach, they're reportedly intrigued by one former head coach who's still in the playoffs. By Adam Hermann

Blues hire Kirk Muller as assistant coach (05/13/14): From working under him to working beside him, Kirk Muller will be joining one of his former coaches, Ken Hitchcock, behind the St. Louis Blues bench.

Coach Kirk Muller fired by Carolina Hurricanes in first of major moves (05/2014): The Hurricanes fired Kirk Muller and most of his staff, but the question remains: what do they do next?

Hurricanes coach Kirk Muller would like to have Devils' goalie 'problem' (11/2013): Former Devils center says it would be a welcome dilemma

Kirk Muller faces pivotal season in Carolina (08/2013): This is his first "full" campaign.

DeCock: Canes coach Kirk Muller brings fun back to team (01/2013): Between Kirk Muller’s ebullient personality and the results the team saw on the ice, a long-forgotten emotion returned to the Hurricanes’ dressing room: Fun.