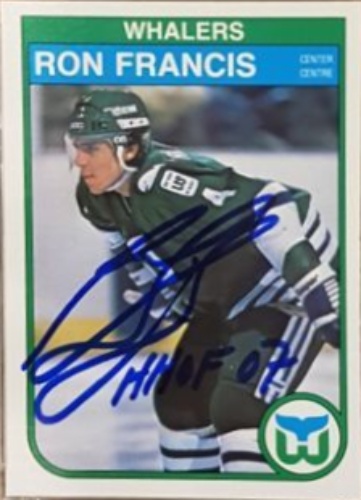 Ronald Michael Francis Jr. (born March 1, 1963) is a Canadian former professional ice hockey centre. He is the general manager of the Seattle Kraken that inaugurated its first season in 2021. Drafted fourth overall in the 1981 NHL Entry Draft, Francis played 23 seasons in the NHL for the Hartford Whalers, Pittsburgh Penguins, Carolina Hurricanes, and Toronto Maple Leafs. Upon retiring from professional ice hockey in 2004, Francis stood second all-time in career assists (1,249), behind only Wayne Gretzky; fifth in career points (1,798); third in games played (1,731); and 27th in career goals (549). More about Ron Francis

Current items with a signature of Ron Francis

These are the most current items with a signature of Ron Francis that were listed on eBay and on other online stores - click here for more items.

Traded items with a signature of Ron Francis

If you're interested in Ron Francis Rookie cards you might want to take a look at our sister site that specializes in Hockey Rookie Cards only.

The most expensive item with a signature of Ron Francis (RON FRANCIS HARTFORD WHALERS SIGNED CCM VINTAGE JERSEY PSA/DNA COA W97531) was sold in July 2016 for $499.99 while the cheapest item (2002 Upper Deck MVP #33 Ron Francis signed/autographed card Carolina Hurricanes) found a new owner for $0.13 in October 2013. The month with the most items sold (14) was March 2011 with an average selling price of $9.99 for an autographed item of Ron Francis. Sold items reached their highest average selling price in January 2016 with $272.47 and the month that saw the lowest prices with $0.99 was June 2017. In average, an autographed item from Ron Francis is worth $11.11.

Most recently, these items with a signature of Ron Francis were sold on eBay - click here for more items.

NHL Draft: Teams weigh risks of selecting Russian prospects (07/05/22): The war in Ukraine has added an increasing level of uncertainty for NHL teams interested in drafting Russia-born prospects because of questions regarding their availability to play in North America. While no team has openly stated it would avoid selecting Russians altogether in the two-day draft in

GM Francis: Kraken in no rush to pick first coach (12/01/20): GM Ron Francis told ESPN on Tuesday that the Kraken "want to get a lay of the landscape" before picking their coach for the 2021-22 season.

Ron Francis diving right in as NHL GM in Seattle (10/23/19): Now that he is a couple months into the job, Ron Francis has gained a little more appreciation for the task he signed up for. The easy decision for the 56-year-old Hockey Hall of Famer would have been to take a consulting or scouting gig, keep his family settled in North Carolina and avoided the ki

From the workshop of Ron Francis (11/27/14): A LOOK BACK into the history of the Campbell River area

‘This was a cry for help': Senior officer calls for RCMP to address PTSD in wake (10/2014): It appears no one else was involved in his death but Brown wouldn’t provide any details about the circumstances of how the Mountie famous for smoking pot in uniform died

Pot-smoking Mountie Ron Francis begins trial on 3 charges (09/2014): A New Brunswick Mountie who made national headlines for smoking medical marijuana while in uniform last year is due to stand trial today on three charges.

Ron Francis on HNIC Radio (04/2014): The Carolina Hurricanes' newest GM joined Hockey Night In Canada Radio host Rob Pizzo on Monday. Hear what Ron Francis had to say about his new role with the team.

Pot-smoking Mountie Ron Francis pleads not guilty to 3 charges (02/2014): A New Brunswick Mountie who made headlines for smoking medical marijuana while in uniform has pleaded not guilty to three charges.

Cpl. Ron Francis turns in RCMP serge after pot controversy (11/2013): WARNING: Video contains graphic language. Cpl. Ron Francis turned over his RCMP uniforms and gear to J Division in New Brunswick, after being requested to after smoking medical marijuana while on the job.

NHL notes: Ron Francis buys into Hurricanes (09/2012): Hockey Hall of Famer Ron Francis is now a part-owner of the team he starred with during his playing days, the Carolina Hurricanes.

Another day, another project for Ron Francis (07/2012): Octogenarian who once guarded the Royal family spends his days creating, tinkering and helping others in Campbell River

Ron Francis, "I'm happy with the move." (05/2011): Ron Francis will leave his associate head coaching position to concentrate on front office duties with the Hurricanes.