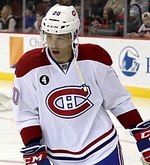 Emmanuel Noveen Malhotra (born May 18, 1980) is a Canadian former professional ice hockey centre who is currently an assistant coach for the Toronto Maple Leafs of the National Hockey League (NHL). He is a former assistant coach of the Vancouver Canucks. He last played with the Lake Erie Monsters in the American Hockey League (AHL) on a try-out basis. During his 18-year career, he played as a centre for the Montreal Canadiens, Carolina Hurricanes, Vancouver Canucks, San Jose Sharks, Columbus Blue Jackets, Dallas Stars and the New York Rangers. Malhotra was known as a two-way forward and for his faceoff proficiency, in which he won over 56% of faceoffs he took in the NHL. Malhotra holds the distinction of being the last active player to have been a teammate of Wayne Gretzky. More about Manny Malhotra

Current items with a signature of Manny Malhotra

These are the most current items with a signature of Manny Malhotra that were listed on eBay and on other online stores - click here for more items.

Traded items with a signature of Manny Malhotra

The most expensive item with a signature of Manny Malhotra (MANNY MALHOTRA SIGNED CANUCKS STANLEY CUP JERSEY) was sold in May 2011 for $249.99 while the cheapest item (MANNY MALHOTRA 2011 SCORE AUTOGRAPHED CARD) found a new owner for $0.71 in August 2012. The month with the most items sold (9) was March 2011 with an average selling price of $12.99 for an autographed item of Manny Malhotra. Sold items reached their highest average selling price in January 2022 with $29.99 and the month that saw the lowest prices with $0.71 was August 2012. In average, an autographed item from Manny Malhotra is worth $5.07.

Most recently, these items with a signature of Manny Malhotra were sold on eBay - click here for more items.

Manny Malhotra gives Habs faceoff edge (11/09/14): Veteran centre is a big reason that the Canadiens are the NHL’s best team within the circles

Manny Malhotra leads Hurricanes over Senators (01/2014): RALEIGH, N.C.- The Carolina Hurricanes maintained their home dominance against the Ottawa Senators, this time in a win that featured a combined seven-goal second period.

HNIC Radio: Manny Malhotra feeling 'normal' again (10/2013): Manny Malhotra is getting another shot at a comeback, this time with the Carolina Hurricanes. The veteran forward chatted with Rob Pizzo and Cassie Campbell-Pascal on Hockey Night in Canada Radio on SiriusXM on Thursday about his new 1-year, 2-way contract.

Manny Malhotra continues to hope for an opportunity (07/2013): He played nine very limited games in 2013.

Dowbiggin: Networks miss the story on Manny Malhotra (02/2013): Is it too much to ask networks to look into the rich vein of data available on the web to tell us more Malhotra stories

Manny Malhotra: Canada must lose 'gold-or-bust' mentality at world juniors (01/2013): As the NHL lockout dragged on Thursday, the world junior hockey championship was a welcome distraction for some members of the Vancouver Canucks. Forward Manny Malhotra said it's time for Canada to lose its gold-or-bust mentality at the annual international affair.