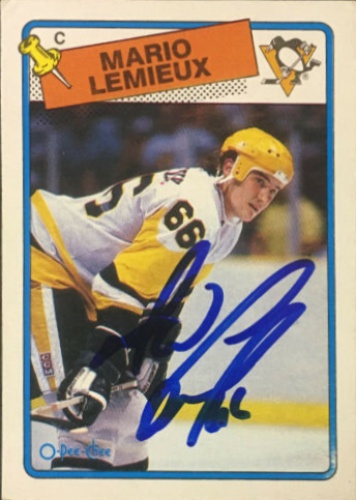 Mario Lemieux OC CQ (/ləˈmjuː/; French: ; born October 5, 1965) is a Canadian former professional ice hockey player. He played parts of 17 National Hockey League (NHL) seasons (his whole NHL career) with the Pittsburgh Penguins from 1984 to 2006, assuming ownership in 1999. Nicknamed "The Magnificent One", "Le Magnifique" and "Super Mario" after the fictional character of the same name, he is widely regarded as one of the greatest players of all time. A gifted playmaker and fast skater despite his large size, Lemieux often beat defencemen with fakes and dekes. More about Mario Lemieux

Current items with a signature of Mario Lemieux

These are the most current items with a signature of Mario Lemieux that were listed on eBay and on other online stores - click here for more items.

Traded items with a signature of Mario Lemieux

If you're interested in Mario Lemieux Rookie cards you might want to take a look at our sister site that specializes in Hockey Rookie Cards only.

The most expensive item with a signature of Mario Lemieux (SP Mario Lemieux Game Worn Used Gamer Jersey WBS Penguins Signed LOA Pittsburgh) was sold in April 2021 for $9999.66 while the cheapest item (Mario lemieux signed paper) found a new owner for $0.48 in March 2015. The month with the most items sold (53) was June 2020 with an average selling price of $2.99 for an autographed item of Mario Lemieux. Sold items reached their highest average selling price in May 2017 with $300.00 and the month that saw the lowest prices with $2.00 was October 2015. In average, an autographed item from Mario Lemieux is worth $69.99.

Most recently, these items with a signature of Mario Lemieux were sold on eBay - click here for more items.

Penguins sale to Fenway Sports Group approved by NHL Board of Governors (12/10/21): Mario Lemieux and Ron Burkle will remain "part of the ownership group."

NHL Viewers Club: Mario Lemieux's five-goal outburst at Madison Square Garden (05/05/20): The game had star power, sizzle and 14 total goals. Plus, we debate Lemieux's status in the GOAT rankings, and how these Penguins would fare in today's NHL.

Alex Ovechkin passes Mario Lemieux for 10th on all-time goals scored list with h (01/18/20): The Great 8 continues to solidify his case as one of the sport's living legends

Kucherov fastest to 100 points since Lemieux in 1997 (02/22/19): Nikita Kucherov became the fastest player to 100 points in a season since Mario Lemieux in the Lightning's 2-1 win over the Sabres.

Lemieux and Gretzky Part 2: Wayne's son, Mario's daughter act in movie together (02/2019): Three decades they dominated the NHL, Wayne Gretzky's son and Mario Lemieux's daughter will appear together in a film -- appropriately about hockey.

PHT Morning Skate: Mario Lemieux had heroes, too (03/2015): Looking up to Thursday's links.

Adam Bittner: Mario Lemieux the defining athlete for Pittsburgh millennials (12/2014): The Pirates, Steelers and Penguins have combined to retire the numbers of 11 Pittsburgh athletes over the years. Only one of them has suited up to play a game since 1982.

Chapter 5 -- The evolution of Mario Lemieux: A fortune at stake (11/2014): This is the fifth of eight chapters. Click here for the full story and an interactive display with video highlights of Mario Lemieux’s career and more photos.

Mario Lemieux to take the ice at Consol for charity hockey camp (12/2013): Fans will get a chance to watch Penguins Hall of Fame center and co-owner Mario Lemieux on the ice Jan. 4 at Consol Energy Center.

Bartkowski: If not for Mario Lemieux, I wouldn’t be playing hockey (05/2013): Funny how things turn out.

Report: Mario Lemieux disappointed and embarrassed by Penguins dirty play (04/2012): The team will also support any suspensions handed out by the league.

What do Shania Twain and Mario Lemieux have in common? (03/2012): No description available

Watch Evgeni Malkin’s Mario Lemieux-like goal of the year candidate (02/2012): Malkin finished the game with a hat trick in a 8-1 Pens win over Tampa Bay.

Statue To Honor Mario Lemieux (01/2012): There’s a big honor in the works for Mario Lemieux. The Penguins announced today that a statue honoring the career and achievements the hockey legend and Hall-of-Famer will be unveiled on March 7.

Yes, you too could own Mario Lemieux’s 1990 All-Star Game uniform (12/2011): Owning a full piece of NHL history can be hard to do, that is unless you've got the bucks to shell out in an auction to get it.

Gordie Howe and Mario Lemieux round out NHL 12′s legends; How they’ll be integra (08/2011): Mario Lemieux and Gordie Howe were the final two legends that EA Sports announced for NHL 12. Check out the promotional video and a little insight on how all nine legends will be integrated into the game.

Pittsburgh Penguins co-owner Mario Lemieux is a hypocrite for not speaking up af (03/2011): Mario Lemieux believes that the National Hockey League needs to step up and protect the integrity of the game and the safety of its players. So what happens when one of his players is suspended for the remainder of the season and first-round of the playoffs for another cheap head shot?

Don Cherry On Mario Lemieux: 'You're A Hypocrite' (02/2011): Early last week, former NHL great and Pittsburgh Penguins owner Mario Lemieux criticized the league for not doing enough in punishing the New York Islanders for their melee with the Penguins.

Mario Lemieux says Sidney Crosby's achievements are better than his own (12/2010): PITTSBURGH, Pa. - In Mario Lemieux's eyes, Sidney Crosby is in the midst of a season that has eclipsed anything he accomplished during a Hall of Fame career.