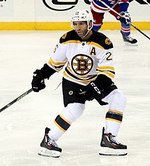 Maxime Talbot (born February 11, 1984) is a Canadian former professional ice hockey centre who played in the National Hockey League (NHL) for the Pittsburgh Penguins, Philadelphia Flyers, Colorado Avalanche and Boston Bruins. He was drafted into the NHL out of the Quebec Major Junior Hockey League (QMJHL) by the Pittsburgh Penguins, 234th overall, in the 2002 NHL Entry Draft. He led the Hull/Gatineau Olympiques to back-to-back President's Cups while earning the Guy Lafleur Trophy as playoff MVP both years. More about Max Talbot

Current items with a signature of Max Talbot

These are the most current items with a signature of Max Talbot that were listed on eBay and on other online stores - click here for more items.

Traded items with a signature of Max Talbot

The most expensive item with a signature of Max Talbot (MAX TALBOT Signed Pittsburgh Penguins Game Issued PRO NEW Hockey Jersey coa) was sold in December 2016 for $299.99 while the cheapest item (PHILADELPHIA FLYERS MAX TALBOT AUTOGRAPHED PENGUINS CARD) found a new owner for $0.93 in May 2012. The month with the most items sold (26) was December 2009 with an average selling price of $25.49 for an autographed item of Max Talbot. Sold items reached their highest average selling price in February 2009 with $164.99 and the month that saw the lowest prices with $0.99 was March 2015. In average, an autographed item from Max Talbot is worth $20.00.

Most recently, these items with a signature of Max Talbot were sold on eBay - click here for more items.

Boston Bruins’ Max Talbot could be the glue they need to keep their Stanley Cup (03/13/15): Sometimes it is the small deals that end up having the biggest impact.

Brett Connolly Practices With Bruins; Max Talbot Set To Arrive In Boston (03/08/15): Brett Connolly arrived in Boston on Tuesday morning, and he went straight to work with...

The former Cynthia Phaneuf is married to Avalanche's Max Talbot (12/2014): Max and Cynthia Talbot are the most accomplished Canadian couple on ice, the surface that defines the country.

Avalanche's Max Talbot healed, rested and ready to win big (09/2014): Max Talbot played with his shoulder in a sling last spring, one final tough break in a season full of them. The Avalanche acquired him early in the season from a team with which he felt he would establish deep roots. The move uprooted his family, which was to include a soon-to-be-born child.

Max Talbot excused from Avalanche to be with fiancee before birth (02/2014): Avalanche coach Patrick Roy likes his tight-knit team, so much so that he doesn't seem to want any reinforcements from the minor leagues.

Philadelphia Flyers trade Max Talbot to Colorado Avalanche for Steve Downie (10/2013): The move is somewhat of a surprise, with Colorado off to a 10-1 start and leading its division.

Broken leg for Max Talbot (04/2013): The Flyers announced on Monday morning that Talbot will be out indefinitely with a fractured left leg. His season - or, at least regular season - is likely all but over.

Flyers need players like Max Talbot to step up offense (02/2013): IN AN attempt to project this season's offensive output, the Flyers' brass needed to rely on a handful of players continuing to exceed expectations in order to increase last season's 264 goals.

VOORHEES, N.J. -- Max Talbot sat in his usual locker stall. So did Kimmo Timonen (01/2013): This was the team locker room -- the real one -- and not the accommodations usually reserved for pee-wee games the Flyers were forced to use because of the lockout.

Max Talbot, Philadelphia Flyers Forward, Rappels Down 20-Story Building For Char (11/2012): Max Talbot sure is putting his lockout-driven downtime to good use. On the day the NHL canceled the Winter Classic , the Flyers forward rappelled down One Penn Plaza in Philadelphia's Center City for WMMR's Preston & Steve radio show.

Philadelphia Flyers Sign Jaromir Jagr, Max Talbot (07/2011): The Penguins hoped former MVP Jaromir Jagr would return to Pittsburgh. But he's joining one of their division rivals, along with another Stanley Cup winner.

Max Talbot ready to bust out (12/2010): Pittsburgh Penguins forward among those destined to make waves on HBO’s new NHL series