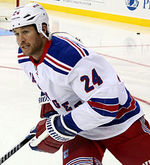 Ryan Gregory Malone (born December 1, 1979) nicknamed "Bugsy", is an American former professional ice hockey forward. He played in the National Hockey League (NHL) with the Pittsburgh Penguins, Tampa Bay Lightning and New York Rangers. In 2003, he became the first Pittsburgh-born and trained player to suit up for the Penguins in an NHL game. More about Ryan Malone

Current items with a signature of Ryan Malone

These are the most current items with a signature of Ryan Malone that were listed on eBay and on other online stores - click here for more items.

Traded items with a signature of Ryan Malone

The most expensive item with a signature of Ryan Malone (Koho Authentic Pittsburgh Penguins Ryan Malone #12 Jersey Size XL AUTOGRAPHED) was sold in April 2020 for $174.99 while the cheapest item (Ryan Malone 07-08 Be A Player Signature Card) found a new owner for $0.09 in July 2012. The month with the most items sold (13) was March 2008 with an average selling price of $10.50 for an autographed item of Ryan Malone. Sold items reached their highest average selling price in April 2020 with $174.99 and the month that saw the lowest prices with $0.75 was February 2019. In average, an autographed item from Ryan Malone is worth $9.99.

Most recently, these items with a signature of Ryan Malone were sold on eBay - click here for more items.

Ryan Malone Lands In Hartford 30 Years After Whaler Dad (11/13/14): HARTFORD — As he reported to practice on his first day with his new team, Ryan Malone had a question when he walked into the XL Center.

Rangers’ fourth-liner Ryan Malone a bright spot in ugly loss (10/14/14): It was clear Rangers coach Alain Vigneault doesn’t have a ton of confidence in Ryan Malone, but Malone put together a commendable performance in his Blueshirts debut on Tuesday night....

If Ryan Malone keeps this up, he’ll become real Rangers weapon (09/23/14): Ryan Malone still speaks as if the Rangers are something he is not part of, but if he keeps playing like he did on Monday night at the Garden, then...

Ryan Malone 'grateful for the opportunity' given by Rangers (09/18/14): Things looked pretty bleak for Ryan Malone earlier this summer, facing DUI and cocaine possession charges and the subject of a compliance buyout used by the Tampa Bay Lightning.

Ryan Malone not distraction for Lightning (04/2014): Tampa Bay Lightning head coach Jon Cooper told reporters Sunday that Ryan Malone's DUI and cocaine possession charges will not be a distraction heading into the playoffs.

Ryan Malone expected out 3-4 weeks with an ankle fracture (12/2013): Lightning coach Jon Cooper hinted Tuesday morning that left wing Ryan Malone might be out a while, but gave no specifics. It was up to general manager Steve Yzerman to deliver the bad news: