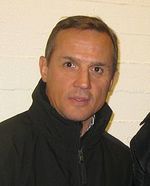 Stephen Gregory Yzerman (/ˈaɪzərmən/; born May 9, 1965) is a Canadian former professional ice hockey player currently serving as executive vice president and general manager of the Detroit Red Wings, with whom he spent all 22 seasons of his NHL playing career. Widely regarded as one of the greatest players of all time, he is a Detroit sports icon and a member of the Hockey Hall of Fame. After his retirement as a player, he served in the front office of the Red Wings, and then as general manager of the Tampa Bay Lightning, while also being executive director for Team Canada in two Olympics. More about Steve Yzerman

Current items with a signature of Steve Yzerman

These are the most current items with a signature of Steve Yzerman that were listed on eBay and on other online stores - click here for more items.

Traded items with a signature of Steve Yzerman

If you're interested in Steve Yzerman Rookie cards you might want to take a look at our sister site that specializes in Hockey Rookie Cards only.

The most expensive item with a signature of Steve Yzerman (Autographed Game Used Worn Steve Yzerman Detroit Red Wings Jersey) was sold in February 2021 for $3500.00 while the cheapest item (2001-02 BAP SIGNATURE CERTIFIED PURPLE /50 STEVE YZERMAN) found a new owner for $0.75 in July 2019. The month with the most items sold (30) was November 2010 with an average selling price of $14.74 for an autographed item of Steve Yzerman. Sold items reached their highest average selling price in June 2022 with $1017.50 and the month that saw the lowest prices with $2.99 was June 2019. In average, an autographed item from Steve Yzerman is worth $31.00.

Most recently, these items with a signature of Steve Yzerman were sold on eBay - click here for more items.

Red Wings hire Lightning assistant Derek Lalonde as coach (06/30/22): The Detroit Red Wings have hired Derek Lalonde to coach their rebuilding team, hoping the two-time Stanley Cup-winning assistant can make all the right moves to make the franchise relevant again. Lalonde spent the past four years on Jon Cooper’s staff with the Tampa Bay Lightning, a stretch that in

Road to Stanleytown: Red Wings finish the job, sweep Flyers to win 1997 Stanley (06/07/22): Steve Yzerman was first to hold the Stanley Cup after the 1996-97 Detroit Red Wings swept the Philadelphia Flyers. But who took home the Conn Smythe?

Road to Stanleytown: Inside Steve Yzerman's Red Wings run on verge of ending Cup (06/06/22): Before Game 4, Mitch Albom wrote lengthy story about Steve Yzerman on the verge of a dream come true with Detroit Red Wings in 1997 Stanley Cup Finals

Road to Stanleytown: Why Steve Yzerman admitted 1997 Red Wings were 'different' (05/2022): The 1997 Detroit Red Wings awaited their next opponent, which gave Steve Yzerman a chance to remark on why this Wings squad wasn't the same as others

Wings still looking for turnaround under Yzerman (04/2022): The Red Wings haven't had much success under third-year GM Steve Yzerman, but the franchise hopes strong rookie seasons from Moritz Seider and Lucas Raymond lead to better days.

Hellebuyck, others wonder if NHL COVID protocol, pause is ‘overkill’ (12/2021): Ryan O'Reilly, Steve Yzerman, and others weighed in. But are they being too bold?

Red Wings' slow, painful 'Yzerplan' is finally starting to pay off (10/2021): When Steve Yzerman returned to the Red Wings as GM in 2019, he inherited a rebuild and opted not to accelerate it, testing the patience of the Hockeytown faithful.

NHL draft winners and losers: First-round goalies, Steve Yzerman, University of (07/2021): With the draft (finally) complete, we run down who comes away looking great -- and not so great -- after the weekend.

Red Wings GM in isolation after COVID exposure (10/2020): Detroit GM Steve Yzerman is in self-isolation and communicating remotely with his staff during the draft after he was exposed to someone who tested positive for the coronavirus.

The NHL's best and worst this week: Why the Fabbri trade is a win-win move for D (11/2019): The 23-year-old forward wants a fresh start, and Steve Yzerman wants low-risk, high-ceiling talent. Plus, three stars, top games this week and more.

'We need everyone to buy in': The early days of Steve Yzerman's era as GM of the (10/2019): The franchise icon takes over a team in need of a significant refresh. Here's how he plans to get it done, perhaps more quickly than some expect.

Lightning GM Steve Yzerman: A "50-50" chance he makes a deal (02/2015): With the trade deadline looming Monday, the Lightning would still like to add a veteran defenseman, preferably a right-handed shot.

Steve Yzerman & more: 10 questions with AIC Hobey Baker Nominee Alexander MacMil (01/2015): Congratulations! Your weather is set to . You can change the location at any time. Don't have an account?

Former Red Wings Steve Yzerman, Nicklas Lidstrom inducted into International Hoc (05/2014): The late Ruslan Salei, who played one season with the Red Wings, was inducted in his native country during an emotional ceremony.

Poll: Should fighting carry stiffer penalties or be banned outright as Steve Yze (10/2013): After the George Parros-Coltin Orr bout Tuesday night, Yzerman spoke out about fighting in the NHL but was he correct?

Lightning GM Steve Yzerman is on the right track, but has a lot more do do. (04/2013): It was a nice bit of work by Tampa Bay GM Steve Yzerman to outbid the competition and add Ben Bishop from Ottawa at the trade deadline. And it was an even neater trick to extend the netminder yesterday with a two-year, $4.6 million deal.

Avs' Joe Sakic or Red Wings' Steve Yzerman: Who was the better center? (11/2012): Lunch Special: Each weekday near noontime, a Denver Post sports writer dares to dish. In this installment, Adrian Dater compares two of the top 10 centers in NHL history.

Steve Yzerman says he'll always be tied to Red Wings (10/2012): Former Red Wings captain Steve Yzerman is enjoying his new role in hockey, in management. "I like the idea of building a team, finding players," the Tampa Bay Lightning general manager told Dan Rosen of NHL.com. Here are some highlights of Rosen's Q&A with The Captain:

Steve Yzerman back in Detroit (11/2011): Last year, when Justin Bieber played the St. Pete Times Forum, Yzerman took his young daughters to see the Canadian teen idol, but Bieber only had eyes for Stevie Y, pointing out to the crowd how honoured he was to be in Yzerman's presence.

Bob Wojnowski: Steve Yzerman on being GM: I enjoy this as much as playing' (02/2011): When the Red Wings visit the Tampa Bay Lightning tonight, Yzerman will face his former team, and he's trying to make the strange event feel as normal as possible.

Steve Yzerman’s on-the-job training pays off (11/2010): His Tampa Bay Lightning are one of the most improved teams in the NHL this season