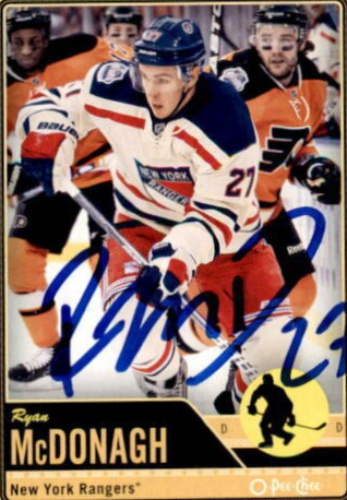 Ryan Patrick McDonagh (born June 13, 1989) is an American professional ice hockey defenseman for the Nashville Predators of the National Hockey League (NHL). Drafted in the first round, 12th overall, by the Montreal Canadiens in 2007, he played college hockey for the Badgers at the University of Wisconsin–Madison. He also played for the New York Rangers, for whom he served as team captain from October 2014 until being traded to the Tampa Bay Lightning in 2018. McDonagh won back-to-back Stanley Cups with the Lightning in 2020 and 2021. More about Ryan McDonagh

Current items with a signature of Ryan McDonagh

These are the most current items with a signature of Ryan McDonagh that were listed on eBay and on other online stores - click here for more items.

Traded items with a signature of Ryan McDonagh

The most expensive item with a signature of Ryan McDonagh (Ryan McDonagh Signed Team USA Olympics Hockey Jersey Steiner COA Hologram) was sold in February 2014 for $400.00 while the cheapest item (2011-12 UD Artifacts Autofacts Signature Ryan McDonagh A-RM) found a new owner for $0.77 in December 2020. The month with the most items sold (11) was March 2017 with an average selling price of $24.99 for an autographed item of Ryan McDonagh. Sold items reached their highest average selling price in March 2015 with $290.00 and the month that saw the lowest prices with $0.99 was April 2019. In average, an autographed item from Ryan McDonagh is worth $24.99.

Most recently, these items with a signature of Ryan McDonagh were sold on eBay - click here for more items.

It took 1 highlight for Ryan McDonagh to prove he’s healthy (01/01/15): Marc Staal was just shaking his head. What could he really say that hadn’t been utterly obvious to those in BB&T Center on Wednesday night? “He was awesome,” Staal said...

Ryan McDonagh gets the Rangers scapegoat treatment (12/2014): There was no pulling punches by player or coach on this day, with the Rangers’ spotlight of disappointment shifting from their best player to arguably their second best. Following Monday’s...

Craig Button gives Flyers 'A' in NHL Draft, compares top pick Travis Sanheim to (07/2014): Congratulations! Your weather is set to . You can change the location at any time. Don't have an account?

Hartnett: All Signs Point To Ryan McDonagh Becoming Rangers’ Next Captain (06/2014): McDonagh appears to be a captain in waiting. He has become a more vocal leader with age and experience.

Ryan McDonagh trade is best in Rangers history (05/2014): Rangers defenseman Ryan McDonagh has seven points against the Canadiens, the team that drafted him, in the Eastern Conference Final. / Brace Hemmelgarn, USA TODAY Sports

NHL roundup: Ryan McDonagh, Dan Girardi rally Rangers to win (03/2014): Ryan McDonagh scored off a rebound of Dan Girardi's shot 1:56 into overtime to complete the New York Rangers' stunning rally in a 4-3 victory over the Phoenix Coyotes on Monday night.

Ryan McDonagh: ‘Hockey gods are testing’ Rangers (12/2013): It will be well into 2014 when the true character of this year’s Rangers team will be clear for all to see. Because for at least the next month, the...