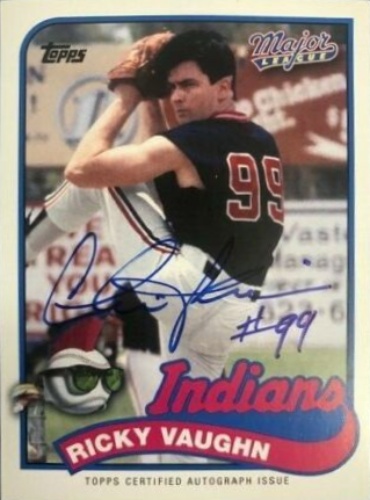 Carlos Irwin Estévez (born September 3, 1965), known professionally as Charlie Sheen, is an American actor. He has appeared in films such as Platoon (1986), Wall Street (1987), Young Guns (1988), The Rookie (1990), The Three Musketeers (1993), and The Arrival (1996). In the 2000s, when Sheen replaced Michael J. Fox as the star of ABC's Spin City, his portrayal of Charlie Crawford earned him a Golden Globe Award for Best Actor. He then starred as Charlie Harper on the CBS sitcom Two and a Half Men (2003—11), for which he received multiple Golden Globe and Primetime Emmy nominations, and as Dr. Charles "Charlie" Goodson on the FX series Anger Management (2012–14). In 2010, Sheen was the highest-paid actor on television, earning US$1.8 million per episode of Two and a Half Men. More about Charlie Sheen

Current items with a signature of Charlie Sheen

These are the most current items with a signature of Charlie Sheen that were listed on eBay and on other online stores - click here for more items.

Traded items with a signature of Charlie Sheen

The most expensive item with a signature of Charlie Sheen (2014 Topps Major League Charlie Sheen Ricky Vaughn CERTIFIED #99 Autograph Card) was sold in August 2022 for $2250.00 while the cheapest item (Charlie Sheen large signature! Platoon Movie Script 1985 Beckett witnessedCOA) found a new owner for $1.25 in December 2020. The month with the most items sold (64) was December 2021 with an average selling price of $84.47 for an autographed item of Charlie Sheen. Sold items reached their highest average selling price in January 2023 with $149.99 and the month that saw the lowest prices with $5.65 was February 2018. In average, an autographed item from Charlie Sheen is worth $77.03.

Most recently, these items with a signature of Charlie Sheen were sold on eBay - click here for more items.

Charlie Sheen tells Lindsay Lohan to 'stay the course' with sobriety (02/09/19): He told Us Weekly magazine: 'I always had tremendous affection for her. I can totally relate to some of the stuff she had gone through, was going through.

Charlie Sheen offers tips to Lindsay Lohan (02/08/19): Charlie Sheen wants Lindsay Lohan to "stay the course" in her sobriety journey. Both Charlie, 53, and Lindsay, 32, have suffered with addiction in the past, and after the 'Platoon' star recently celebrated one year of sobriety, he has said he hopes his former co-star - who worked with

Charlie Sheen Launches Racist Tweet at President Obama (03/2015): Charlie Sheen doesn't think it's very presidential for the commander in chief to be filling out a March Madness bracket on TV.

‘The Goldbergs’ does ‘Ferris Bueller’ — complete with Charlie Sheen (02/2015): ABC’s “The Goldbergs” likes to have fun with its ’80s-era setting through its costumes, music and even plot devices — like Wednesday night’s “Ferris Bueller’s Day Off” tribute episode. In...

All Is Forgiven? Charlie Sheen In ‘Serious Talks’ For ‘Two And A Half Men’ Final (01/2015): Does time really heal all wounds? After Charlie Sheen ’s stint on Two and A Half Men ended with a $100 million lawsuit in 2011, RadarOnline.com has learned the actor… READ ON

Watch Charlie Sheen's Ice Bucket Challenge - without the ice (11/2014): Sheen replaces ice with something a bit more green in his video.

Charlie Sheen Wants to Return to Two and a Half Men (10/2014): But it's doubtful producers want him back

Charlie Sheen Does The Ice Bucket Challenge But With MONEY Instead Of Water = LE (08/2014): Charlie Sheen has done the ice bucket challenge but swapped the water for money. Just because.

Charlie Sheen's fiancée reportedly wants over-the-top wedding (07/2014): A source told RadarOnline.com: "This wedding will be over-the-top, but Brett is being an absolute nightmare to deal with. She truly has become a real diva and no one likes dealing with her."

Why Charlie Sheen's Fourth Engagement Proves The Value Of Investing With Due Dil (02/2014): When investing, whether it is emotionally in a relationship or financially in a publicly traded security, there are always high hopes that all will turn out well. But, as Charlie Sheen's recent engagement ...

Canyon News - Charlie Sheen Donates To Alma Mater (01/2014): SANTA MONICA —Actor Charlie Sheen displayed his generosity by donating a pitching machine to his alma mater. The Anger Management star has donated thousands of dollars over the years to the baseball program that he was once a part of.

Charlie Sheen is reportedly halfway to a $150 million payday. (08/2013): The 'Anger Management' star is set to make a huge amount of money from the sitcom - which will be eligible for syndication next year.

Charlie Sheen thinks the Loch Ness Monster is afraid of him. (07/2013): The 'Anger Management' star, who flew to Scotland this week in a bid to hunt down the elusive creature in the country's famous lake Loch Ness, believes the monster was hiding from him because it was ashamed it would be no match for him.

Charlie Sheen Suits Up as the Commander-in-Chief in First 'Machete Kills' Traile (05/2013): Charlie Sheen is credited as Carlos Estevez in his portrayal of the U.S. president in the action film, which also stars Lady GaGa , Michelle Rodriguez and Mel Gibson .

Lindsay Lohan, Charlie Sheen team up for ‘Anger Management’ (03/2013): Just when we thought we`d seen it all, two of Hollywood`s biggest train wrecks are back together again. Can you guess who we`re talking about??? Lindsay Lohan and Charlie Sheen ! The two misfits held their reunion on set of sheen`s …

Charlie Sheen’s Special Interest In Lindsay Lohan — It’s All About Sympathy Not (02/2013): Hollywood tongues have been wagging ever since Charlie Sheen started taking a special interest in Lindsay Lohan , but a source close to the actor tells RadarOnline.com exclusively that he… READ ON

Charlie Sheen on 'Piers Morgan' (01/2013): Charlie Sheen talks to CNN's Piers Morgan about fame, "emptiness" and honesty, along with some dishing about "Two and a Half Men" and Lance Armstrong.

Charlie Sheen apologizes for homophobic slur, blames lisp (12/2012): Actor said he was sorry for offending anyone, blaming a lisp for his comment

Charlie Sheen Tries to Heal a Broken Heart in First 'Charles Swan III' Trailer (11/2012): Having a hard breakup with his girlfriend, Charles takes people on a trip to his imaginary world to find an answer if there's hope for him to love again.

Jon Cryer will tell Charlie Sheen stories on 'The Jeff Probst Show' (09/2012): Jon Cryer took home an Emmy on Sunday for best comedy actor, but when it comes to talking about his work on last season's "Two and a Half Men," Charlie Sheen still takes center stage.

Charlie Sheen And Bill Murray Get Close In New Film (08/2012): Charlie Sheen and Bill Murray play close friends in the upcoming film “A Glimpse Inside The Mind Of Charles Swan III”, a movie by Roman Coppola about a man whose life starts to slowly come unraveled when his girlfriend dumps …