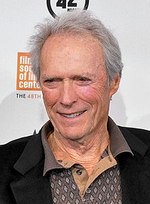 Clinton Eastwood Jr. (born May 31, 1930) is an American actor, film director, producer, and composer. After achieving success in the Western TV series Rawhide, he rose to international fame with his role as the "Man with No Name" in Sergio Leone's "Dollars Trilogy" of Spaghetti Westerns during the mid-1960s and as antihero cop Harry Callahan in the five Dirty Harry films throughout the 1970s and 1980s. These roles, among others, have made Eastwood an enduring cultural icon of masculinity. Elected in 1986, Eastwood served for two years as the mayor of Carmel-by-the-Sea, California. More about Clint Eastwood

Current items with a signature of Clint Eastwood

These are the most current items with a signature of Clint Eastwood that were listed on eBay and on other online stores - click here for more items.

Traded items with a signature of Clint Eastwood

The most expensive item with a signature of Clint Eastwood (Clint Eastwood Fistfull Of Dollars 13 Metal Replica Pistol Signed BAS Certified) was sold in April 2022 for $5999.99 while the cheapest item (SIGNED PRESS PHOTO 2 Clint Eastwood DIRTY HARRY MAN NO NAME RAWHIDE JOE KIDD) found a new owner for $0.01 in October 2019. The month with the most items sold (109) was December 2019 with an average selling price of $31.00 for an autographed item of Clint Eastwood. Sold items reached their highest average selling price in March 2016 with $415.00 and the month that saw the lowest prices with $24.99 was June 2019. In average, an autographed item from Clint Eastwood is worth $45.00.

Most recently, these items with a signature of Clint Eastwood were sold on eBay - click here for more items.

Cry Macho Trailer: Clint Eastwood Is a Washed-Up Rodeo Star on an Unexpected Jou (08/06/21): Watch Clint Eastwood do what he does best these days, teaching boys how to be men in his upcoming western.

Cry Macho First Look Gives Cowboy Clint Eastwood a Pet Rooster (08/05/21): 91-year-old actor/director Clint Eastwood is back on the big screen and the director's chair for the 70s era western.

How the Investigation Into Richard Jewell Unfolded (12/2019): He was a suspect in the 1996 Atlanta Olympics bombing, and is now the subject of Clint Eastwood’s new film. A look back on our reporting to understand the story.

Clint Eastwood eyeing Dicaprio for police bomber drama (04/2015): Leonardo DiCaprio may lead a film about a police officer suspected of planting a bomb at the Atlanta Olympics in 1996.

Clint Eastwood to direct movie about 1996 Olympic security guard (03/2015): Washington, Apr 1 (ANI): 'American Sniper' director Clint Eastwood will be directing a movie based on Richard Jewell, a security guard who discovered a suspicious backpack in the Olympics compound.

What our Margot did to annoy Clint Eastwood (02/2015): RISING star Margot Robbie reveals she did something at the Oscars that had Clint Eastwood shooting her daggers - but we reckon it’s something any Queensland girl would do.

Review: In American Sniper, Clint Eastwood and Bradley Cooper Are Right on Targe (12/2014): The 84-year-old director and his beefed-up star are the prime attractions in this romanticized biopic that succeeds as a grim, smart war movie

The Japanese answer to Clint Eastwood (11/2014): Ken Takakura became a star playing outlaws and stoical heroes in scores of Japanese films. Because of his quiet, brooding screen presence he was often compared to Clint Eastwood.

Part of Clint Eastwood's "Dirty Harry" Larkspur train trestle removed for new br (08/2014): Part of an old railroad trestle — famously used for the 1971 movie "Dirty Harry" — is being removed this week as a new pedestrian overpass is built across busy Sir Francis Drake Boulevard near the Larkspur Ferry Terminal.

Clint Eastwood's son Scott saddles up for Nicholas Sparks adaptation (04/2014): Scott Eastwood may have inherited his father Clint's good looks, but what about his acting talent?

Warner Brothers fires shot in battle over Clint Eastwood baseball film (03/2014): Studio rejects allegations about 2012 film Trouble with the Curve, while star Eastwood is credited with saving a life at a golf tournament Rory Carroll

Prosecutor quotes Clint Eastwood; Boulis jury deliberates (10/2013): After hearing three weeks of wild testimony, the jury in the Gus Boulis murder trial is deliberating the fate of one of his alleged killers.

Clint Eastwood's 'acting-loving' son wants to make it big in Hollywood (09/2013): New York, Sept 25 : Scott Eastwood has revealed that he likes being "under the radar", and the reason he has entered the business is because he "likes acting" and wants to make movies.

Clint Eastwood through the years (05/2013): Feeling lucky? Well, then make your day by revisiting the career of Clint Eastwood, who turns 83 on Friday, from no-name gunslinger and loose-cannon cop to Oscar-winning filmmaker.

Will Clint Eastwood Direct 'Jersey Boys' Movie? (03/2013): Sources say the veteran director is looking to push back his "A Star Is Born" remake and focus on the 1960s-set film based on the mega-hit musical. read more

Clint Eastwood's Obama chair kept in RNC office in Washington D.C. (01/2013): The infamous empty chair that Clint Eastwood addressed in his imaginary conversation with President Obama at the 2012 Republican National Convention did not simply get discarded or put away like so many other chairs.

Clint Eastwood’s daughter produces new film in N.M. (12/2012): Kimber Eastwood grew up in a Hollywood family. In fact, Eastwood cut her teeth as a makeup artist on ...

Clint Eastwood's got a new ad, and a consistency problem (10/2012): If you saw “Trouble With the Curve," you know Clint Eastwood can play flinty American authenticity as well as ever. When it comes to political messaging, though, he’s got problems.

Clint Eastwood-style empty lawn chair display is 'freedom of expression,' not ra (09/2012): GRAND HAVEN TOWNSHIP - A couple assailed with complaints of racial insensitivity because of their front-yard display of two lawn chairs hanging from trees say they are simply exercising their Constitutional rights and displeasure with where their country is headed.

Clint Eastwood's wife Dina Ruiz reveals why she talked him into doing a reality (06/2012): As no-nonsense San Francisco cop Harry Callahan in the Dirty Harry movies and the cheroot-smoking Man With No Name in A Fistful Of Dollars, Clint Eastwood has always been used to getting his own way.

170 quotes for Clint Eastwood's 82nd birthday (05/2012): Even in his ninth decade, we'd be wary of Clint Eastwood 's ass-kicking ability. Here are some choice words from 48 of his movies (and Rawhide ) to mark the day.

Macon His Day: Cameras set to roll for Clint Eastwood movie (03/2012): If you want to catch a glimpse of movie icon Clint Eastwood in Macon, you should be able to -- provided you buy a ticket to “Trouble With The Curve” when it hits theaters in September .

Why Clint Eastwood's Approval of Beyonce's Pregnancy Matters (08/2011): Beyonce Knowles unveiled a secret that has the power to transform the movie business at the Video Music Awards. The mere revelation of the baby bump on Beyonce's belly isn't enough to stir up chatter; there must be something more. What will Clint Eastwood say!

Beyonce says Clint Eastwood film makes her day (07/2011): NEW YORK - Beyonce Knowles has had it all before turning 30, yet is still humbled by what she calls "the biggest opportunity of my life" -- the lead role in Clint Eastwood's remake of the film, "A Star Is Born."

John Farr: Cinematic Superman: The Astonishing Legacy of Clint Eastwood (06/2011): This was the not the first title I had in mind for this piece. But when I dug into Clint Eastwood's life and career, it seemed particularly apt -- and not even close to an overstatement.

Clint Eastwood tired of unoriginal movies (02/2011): The film legend has received major plaudits for his directing ability, as well as his acting skills over a 50 year film and television career.