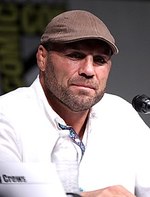 Current items with a signature of Randy Couture

These are the most current items with a signature of Randy Couture that were listed on eBay and on other online stores - click here for more items.

Traded items with a signature of Randy Couture

The most expensive item with a signature of Randy Couture (MMA RANDY COUTURE SIGNED UFC BOXERGENICS GLOVE PSA 1/1) was sold in December 2011 for $475.00 while the cheapest item (Randy Couture Hand Signed 8x10) found a new owner for $0.01 in April 2011. The month with the most items sold (31) was December 2008 with an average selling price of $31.00 for an autographed item of Randy Couture. Sold items reached their highest average selling price in February 2016 with $99.99 and the month that saw the lowest prices with $0.99 was October 2017. In average, an autographed item from Randy Couture is worth $22.00.

Most recently, these items with a signature of Randy Couture were sold on eBay - click here for more items.

Randy Couture's PFL midseason status report: Redemption on the minds of many (05/27/22): The race for the PFL playoffs is on after the first set of fights. What's ahead for every division?

UFC legend Randy Couture suffers heart attack, expected to make full recover (10/25/19): 'The Natural' has been working as a commentator for PFL

UFC legend Randy Couture suffers heart attack, expected to fully recover, per re (10/24/19): 'The Natural' has been working as a commentator for PFL

MMA fighter Randy Couture says he could train Laila Ali if she wants to fight Ro (03/2015): Couture is confident he can teach some grappling skills to the champion boxer.

Video: UFC Hall of Famer Randy Couture on being the bad guy in 'Hawaii Five-O' (02/2015): As “The Natural” throughout his years in MMA, Randy Couture was an All-American good guy to countless fans. But now he’s going to change things up and play the heel.Filed under: Featured Videos, News, Videos

Video: Randy Couture says his relationship with the UFC is 'non-existent' (12/2014): Will the contentious relationship between UFC Hall of Famer Randy Couture and his former employer ever be mended? As of now, “The Natural” doesn’t sound hopeful. Filed under: Bellator, Featured, Featured Videos, News, UFC, Videos

Randy Couture: 'Wesley Snipes Is Onboard For The Expendables 3' (05/2013): Newly-freed Wesley Snipes has officially signed up to make his Hollywood return in the third installment of Sylvester Stallone's action epic The...

Meet Terry Crews and Randy Couture, the rookies of The Expendables 2 (08/2012): The cast of Sylvester Stallone’s latest ensemble flick The Expendables 2 reads more like a course syllabus for a master class on testosterone-fuelled explosion fests. Then there's these guys

Randy Couture, UFC and movie star, tells why he loves the Olympics (07/2012): Randy Couture made his name as an MMA fighter, winning the UFC light heavyweight and heavyweight titles as part of a career that earned him a spot in the UFC Hall of Fame. But before his MMA a…