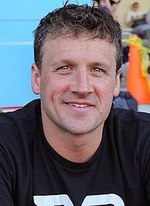 Ryan Steven Lochte (/ˈlɒkti/ LOK-tee; born August 3, 1984) is an American competitive swimmer and 12-time Olympic medalist. Along with Natalie Coughlin, Dara Torres, and Jenny Thompson, he is the second-most decorated swimmer in Olympic history measured by total number of medals, behind only Michael Phelps. Lochte's seven individual Olympic medals rank second in history in men's swimming (again to Michael Phelps), tied for second among all Olympic swimmers. He currently holds the world records in the 200-meter individual medley (long and short course). As part of the American teams, he also holds the world record in the 4×200-meter freestyle (long course) and 4x100-meter freestyle (mixed) relay. More about Ryan Lochte

The most expensive item with a signature of Ryan Lochte (RYAN LOCHTE SIGNED USA SHIRTLESS 8X10 PHOTO SWIM W/PROOF+COA WOW STUD) was sold on eBay in December 2013 for $125.00 while the cheapest item (Ryan Lochte Olympic Gold Medalist Swimmer Signed 8x10 Photo COA sale!!!) found a new owner for $1.04 in January 2013. The month with the most items sold (6) was October 2012 with an average selling price of $33.50 for an autographed item of Ryan Lochte. Sold items reached their highest average selling price in June 2012 with $124.99 and the month that saw the lowest prices with $5.50 was February 2019. In average, an autographed item from Ryan Lochte is worth $54.99.

Current items with a signature of Ryan Lochte

These are the most current items with a signature of Ryan Lochte that were listed on eBay and on other online stores - click here for more items.

Traded items with a signature of Ryan Lochte

Most recently, these items with a signature of Ryan Lochte were sold on eBay - click here for more items.

Ryan Lochte swimming against his reputation (03/15/15): Under SwimMAC Carolina coach David Marsh, there are no rules, no curfews, no one making sure he gets to where he needs to be. He's being treated like an adult – so he'll sink or swim on his own.

Ryan Lochte -- Clubbin' With Amber Rose ... In The Bahamas (03/14/15): Amber Rose partying with Ryan Lochte?!?!?  JEAH!!!! Amber and the Team USA Olympic swimmer were spending some time together last night at the Atlantis in the Bahamas ... where Lochte has been kickin' it for Spring Break.  Lochte has been…

Ryan Lochte -- Clubbin' With Amber Rose ... In The Bahamas (03/2015): Amber Rose partying with Ryan Lochte?!?!?  JEAH!!!! Amber and the Team USA Olympic swimmer were spending some time together last night at the Atlantis in the Bahamas ... where Lochte has been kickin' it for Spring Break.  Lochte has been…

Ryan Lochte's Swim Coach Headed to Lima (01/2015): If you are an avid swim fan you have surely have heard of Olympian Ryan Lochte, and behind every Olympic swimmer there's a tough coach. The Lima YMCA is bringing Lochte's coach, who happens to be his father, to Lima for a swim clinic.

Ryan Lochte: Michael Phelps Made Dumb Decision, ‘Will Become Smarter’ From It (09/2014): If Ryan Lochte thinks you made a dumb decision, then you probably made a very dumb...

Michael Phelps, without Speedo, loses to Ryan Lochte (04/2014): The 22-time Olympic medalist still did quite well, however, because he's Michael Phelps.

Paul Pierce, Ryan Lochte Among Best Of Athletes’ Very First Tweets (03/2014): Twitter turned 8 years old Thursday, and what better way to celebrate than with the...

Is Khloe Kardashian Hooking Up With Game? Ryan Lochte Nearly Nude + More Of What (02/2014): Taylor Swift hangs with Lorde, Cara Delevingne's topless day at the beach, Ryan Lochte nearly nude and more photos from the weekend to catch up on.

Katie Ledecky, Ryan Lochte Win Swimmers of the Year Awards at USA Swimming's Gol (11/2013): HOLLYWOOD, California, November 24. TONIGHT, the top swimmers and support personnel within USA Swimming assembled at the JW Marriott hotel in Los Angeles, and Swimming World was PROUD to be there to ...

Poll of the Week: Ryan Lochte's Reality Show (09/2013): PHOENIX, Arizona, September 27. EARLY last week we got the news that Ryan Lochte's reality show, "What Would Ryan Lochte Do," was not getting renewed for a second season, likely due to low ratings...

Ryan Lochte Heats Up 200 IM With World Best (06/2013): Coverage proudly sponsored by ArenaUSA. For full coverage, including interviews, previews and all the links you need to follow along, check out our event coverage page. INDIANAPOLIS, Indiana, June ...

Video Interview Ryan Lochte on Ditching the 'Banana Hammock' (05/2013): SANTA CLARA, California, May 31. RYAN Lochte talks about his performances on day one of the Arena Grand Prix Santa Clara. He goes into detail about putting on a racing suit, rather than "racing in a...

Ryan Lochte Wants To Invade Your House (03/2013): Get ready, the newest and most annoying reality star to hit your TV will be Ryan Lochte .