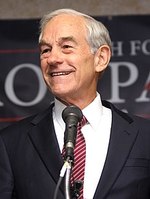 Ronald Ernest Paul (born August 20, 1935) is an American author, activist, physician, and retired politician who served as the U.S. representative for Texas's 22nd congressional district from 1976 to 1977 and again from 1979 to 1985, and for Texas's 14th congressional district from 1997 to 2013. On three occasions, he sought the presidency of the United States: as the Libertarian Party nominee in 1988 and as a candidate for the Republican Party in 2008 and 2012. A self-described constitutionalist, Paul is a critic of the federal government's fiscal policies, especially the existence of the Federal Reserve and the tax policy, as well as the military–industrial complex, the war on drugs, and the war on terror. He has also been a vocal critic of mass surveillance policies such as the USA PATRIOT Act and the NSA surveillance programs. In 1976, Paul formed the Foundation for Rational Economics and Education (FREE), and in 1985 was named the first chairman of the conservative PAC Citizens for a Sound Economy, both free-market groups focused on limited government. He has been characterized as the "intellectual godfather" of the Tea Party movement, a fiscally conservative political movement started in 2009 that is largely against most matters of interventionism. More about Ron Paul

Current items with a signature of Ron Paul

These are the most current items with a signature of Ron Paul that were listed on eBay and on other online stores - click here for more items.

Traded items with a signature of Ron Paul

The most expensive item with a signature of Ron Paul (Ron Paul Signed Original Copy of Hemp Farm Bill H.R. 1831 on Hemp Paper plus Pen) was sold in January 2012 for $720.00 while the cheapest item (Ron Paul Signed 8x10 Photo GOP President Republican Tea Party) found a new owner for $0.99 in December 2015. The month with the most items sold (43) was December 2011 with an average selling price of $30.00 for an autographed item of Ron Paul. Sold items reached their highest average selling price in September 2009 with $284.99 and the month that saw the lowest prices with $0.99 was June 2014. In average, an autographed item from Ron Paul is worth $24.99.

Most recently, these items with a signature of Ron Paul were sold on eBay - click here for more items.

Trump is the Rare Honest Politician about US Debt | Tho Bishop (12/06/18): Once again Donald Trump’s presidency has done a great job of highlighting the hypocrisy and delusion of the beltway bubble. A recent story from the Daily Beast reports that Trump is frustrating advisers with his apathy towards the current trillion dollar deficits coming out of Washington.

Zachary Foster: ‘Lessons from Ron Paul’s Leadership Failures’ (12/05/18): Zachary Foster at LPNevada.org: In Star Wars: The Last Jedi, the ghost of Yoda tells the aging Luke Skywalker that one’s own failures are the greatest lesson a teacher can pass on to a studen…

From Harding to Trump: The evolution of ‘conservative’ foreign policy - AEI (12/04/18): Trump's election has highlighted differing approaches to conservative foreign policy. The effect of this is unlikely to dissipate soon.

Trump disrupted the political establishment and their vision of global domi.. (12/03/18): Trump was never part of the big picture, the plan to take over the world via globalism. Trump was only interested in making America great again.

Odds Stacked Against House Members Considering 2020 White House Bids (12/03/18): As high-profile Democratic senators and governors steel themselves for a race to challenge President Trump in 2020, at least 6 House Dems are weighing runs.

Trump is the Rare Honest Politician about US Debt | Tho Bishop (12/2018): Once again Donald Trump’s presidency has done a great job of highlighting the hypocrisy and delusion of the beltway bubble. A recent story from the Daily Beast reports that Trump is frustrating advisers with his apathy towards the current trillion dollar deficits coming out of Washington.

The future of conservative foreign policy - AEI (11/2018): The election of Donald trump has cracked open the fundamentals of American foreign policy and rendered ideas of national sovereignty mainstream once more.

Rand Paul's balancing act: What to do with Ron Paul's legacy? (02/2015): Kentucky senator gets a huge boost in 2016 if he inherits father's supporters, but has to keep them in the fold and look for new supporters if he wants to win

Are Ron Paul's hard-core stands a problem for son's presidential bid? (01/2015): In Houston speech, father promotes breaking away from U.S. Ron Paul, father of Sen. Rand Paul, R-Ky.,has embraced a role as libertarianism's prophet of doom, telling his supporters that the United States is headed for catastrophes — and might actually need catastrophes to get on the right track.

Ron Paul speaks to students at USF (11/2014): He may not be in public office anymore but former Republican Congressman Ron Paul is still talking a

Former TX Congressman Ron Paul in Dallas Friday; Paul 1st of Many Experts to Spe (10/2014): Experts will speak on topics including Ebola, immigration and employment ahead of the upcoming elections. (PRWeb October 29, 2014) Read the full story at http://www.prweb.com/releases/2014/10/prweb12286600.htm

Ron Paul: US govt. knew about 9/11 (08/2014): Former US congressman Ron Paul has suggested that the US government knew about the Sept. 11, 2001 terrorist attacks before the incident occurred inside the country.

Ron Paul on 'End the Fed' (06/2014): Ron Paul, a former Congressman, was a medical doctor; yet, his writings treated true economics in an ocean of falsehood. It is a miracle to have a non-economist write about the true economic science when this science has become totally corrupted by demagogues.

Until Ron Paul raised the issue at the national level in 2007, the Federal Reser (05/2014): To be sure, most of the public still treats it that way. They have not lost sufficient confidence in the so-called experts, despite the debacle of 2008, to give the Fed a second (or even a first) look.

Ron Paul says Fed created 'distortions' (12/2013): The former Texas representative said investors should not be fooled by the small taper.

Ron Paul Gives Son Rand Some 2016 Advice on Leno: ‘Be Very Cautious…’ (09/2013): During his appearance on the Tonight Show last night, Ron Paul offered up some advice for his son, Sen. Rand Paul (R-KY), should he decide to run for president in 2016. "Be very cautious," Paul suggested, "you could get elected."

Today in Conspiracy: Ron Paul Calls the Chemical Attack in Syria a 'False Flag' (08/2013): The movement leader and former congressman said Bashar al-Assad was being set-up to take the fall for an attack by al-Qaeda.

Why did Ron Paul's group single out Marco Rubio for voting against Rand Paul’s a (07/2013): “Senator Rubio today stood with President Obama and Harry Reid to vote against the rule of law and the American people," the group said.

Libertarian leader Ron Paul to address UF audience (03/2013): Ron Paul , whose campaigns for president on the Libertarian and Republican tickets galvanized voters seeking limited government and individual freedoms, will be speaking at the University of Florida on April 15.

Ron Paul's political heir? John J. Duncan Jr. called 'closest ... to ideological (12/2012): WASHINGTON — The blogosphere has been abuzz with speculation about who might continue to carry the torch for U.S. Rep. Ron Paul now that the straight-talking Texan and campaigner for low taxes and limited government is retiring from Congress.

Ron Paul: Democratic Party, GOP Are Both 'Dinosaurs' (11/2012): Outgoing Rep. Ron Paul (R-Texas) gave an exit interview to the Washington Post this week, capping off his career with a claim that he's driven throughout his 36 years in Congress: The two-party system is obsolete.

Ron Paul-Inspired Group Lobbies for Bill Prompted by Paul Reimbursements (10/2012): A nonprofit group founded to push Rep. Ron Paul's agenda on Capitol Hill has put its weight behind a bill inspired by a reimbursement snafu of Paul's.

Justin Amash raises $39,000 with lottery lure of dinner with Ron Paul (09/2012): Similar campaign contribution pitches have become more frequent this year, and the tactics are being used by each President Barack Obama and Republican challenger Mitt Romney

Colbert Raises More Than PAC Backing Ron Paul (04/2012): Stephen Colbert’s political action committee has enough cash to play jokes and pull pranks through the presidential campaign,  but for now the comedian is mum on how he plans to spend that money. Colbert’s Super PAC, Americans for A Better Tomorrow, Tomorrow has $794,000 cash-on-hand...

Army Reserve reprimands soldier who spoke in uniform at Ron Paul rally (03/2012): The Army determined that Jesse D. Thorsen violated policies that bar soldiers from participating in political events in their official capacities or while in uniform.

Ron Paul: Santorum an ‘addict of conspiracies,’ alliance with Romney pure fictio (02/2012): Over the past week or so, Texas Rep. Ron Paul has been widely accused of being in cahoots with fellow Republican presidential candidate Mitt Romney. But Paul and his campaign say that charge simply isn’t true.

Ron Paul Courts Internet Voters By Denouncing SOPA (12/2011): While he may not win the 2012 presidential election, there’s no denying Ron Paul is leaving a mark on the political process, and he is becoming a threat to, at the very least, challenge for the Republican party nomination as …