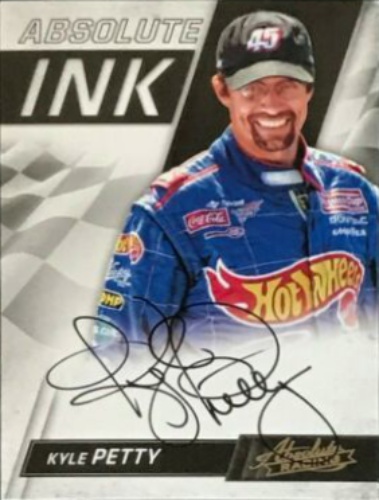 Kyle Eugene Petty (born June 2, 1960) is an American former stock car racing driver, and current racing commentator. He is the son of racer Richard Petty, grandson of racer Lee Petty, and father of racer Adam Petty, who was killed in a crash during practice in May 2000. Petty last drove the No. 45 Dodge Charger for Petty Enterprises, where he formerly served as CEO; his last race was in 2008. More about Kyle Petty

Current items with a signature of Kyle Petty

These are the most current items with a signature of Kyle Petty that were listed on eBay and on other online stores - click here for more items.

Traded items with a signature of Kyle Petty

The most expensive item with a signature of Kyle Petty (Signed In Person by Richard Petty & Kyle Petty #43 Race issued Full Size Tire) was sold in April 2021 for $443.00 while the cheapest item (Kyle Petty Signed Autographed Mellow Yellow Ad Piece) found a new owner for $0.01 in August 2008. The month with the most items sold (30) was January 2022 with an average selling price of $3.99 for an autographed item of Kyle Petty. Sold items reached their highest average selling price in December 2018 with $89.00 and the month that saw the lowest prices with $0.99 was January 2016. In average, an autographed item from Kyle Petty is worth $4.25.

Most recently, these items with a signature of Kyle Petty were sold on eBay - click here for more items.

Kyle Busch chases Richard Petty for 200 NASCAR wins (02/15/19): DAYTONA BEACH, Fla. -- Kyle Busch had been sprayed with champagne and hoisted his winner's trophy last July at Pocono Raceway when fans sitting high above the stage shouted his name so they could snap a quick photo. Busch craned his neck to oblige the requests, and the signage on ...

Kyle Petty not afraid (08/2013): CHARLOTTE, N.C. — Kyle Petty, the driver-turned-analyst with the unfiltered opinions, has angered someone new.

Kyle Petty will have his say as commentator (03/2013): Kyle Petty isn’t afraid to voice his opinion.

Zinn shows off for friend in Kyle Petty (06/2011): York, PA - The smiles said it all. Cody and Greg Zinn wanted to show Kyle Petty their hard work. After Cody spent five days in July 2006 at the Victory Junction Gang Camp for kids with chronic medical conditions or serious illnesses -- which was founded by Petty and his wife Patty in

NASCAR great Kyle Petty stops in Barneveld (05/2011): BARNEVELD, N.Y. (WKTV) - NASCAR fans had quite a treat Saturday in Barneveld as racing legend Kyle Petty made a stop on his Kyle Petty Charity Ride Across America.

Kyle Petty to bring motorcycle ride through Auburn (04/2011): Racing fans, mark your calendars: Emerson Park will serve as an impromptu pit stop and refueling station for a charity motorcycle rally led by former NASCAR Sprint Cup driver Kyle Petty when it makes its way down the East Coast next month.

Come Along For the Ride: With a donation to Kyle Petty's charity, be part of Tea (03/2011): The 17th-annual Kyle Petty Charity Motorcycle Ride announced this year's dates and unveiled details of the New York-to-Florida route.