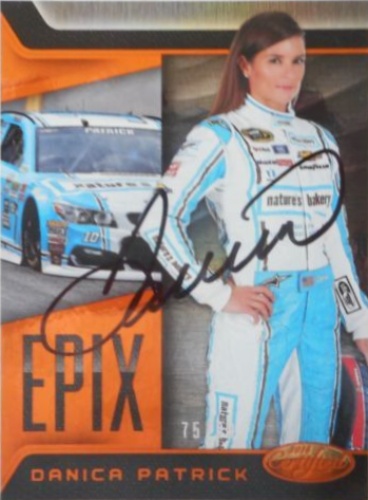 Danica Sue Patrick (/ˈdænɪkə/; born March 25, 1982) is an American former professional racing driver. She is the most successful woman in the history of American open-wheel car racing—her victory in the 2008 Indy Japan 300 is the only win by a woman in an IndyCar Series race. More about Danica Patrick

Current items with a signature of Danica Patrick

These are the most current items with a signature of Danica Patrick that were listed on eBay and on other online stores - click here for more items.

Traded items with a signature of Danica Patrick

The most expensive item with a signature of Danica Patrick (Danica Patrick Autographed Wing from 2005 Indy 500 Rookie of the Year Car) was sold in August 2020 for $21895.00 while the cheapest item (DANICA PATRICK HAND SIGNED NASCAR RACING 8 X 10 SPORTS ACTION PHOTO) found a new owner for $0.99 in April 2021. The month with the most items sold (62) was August 2021 with an average selling price of $27.90 for an autographed item of Danica Patrick. Sold items reached their highest average selling price in April 2012 with $149.99 and the month that saw the lowest prices with $4.75 was October 2013. In average, an autographed item from Danica Patrick is worth $26.00.

Most recently, these items with a signature of Danica Patrick were sold on eBay - click here for more items.

Patrick: U.S. F1 driver would need right circumstances to be a big name (10/20/21): Danica Patrick says Formula One having an American on the grid would only be a good thing for the sport's growth in the U.S. if that driver had the right environment to be a success.

Patrick driving pace car for Indianapolis 500 start (05/19/21): Danica Patrick will serve as the pace car driver for the Indianapolis 500, leading the field to green in a 2021 Chevrolet Corvette Stingray hardtop convertible on May 30.

Sara Christian Competed in the First Ever NASCAR Race and Is the Only Woman To S (12/08/18): The path to women taking part in sanctioned American racing had to start somewhere. Long before women like Danica Patrick and Jennifer Jo Cobb were getting behind the wheel of stock cars, we had women like Sara Christian setting the stage—and at the first ever NASCAR race to boot.

Racing legend Danica Patrick exercises with GoDaddy workers (12/07/18): Newly retired Nascar and Indycar driver Danica Patrick works out with GoDaddy employees in Scottsdale on Dec. 7, 2018. Patrick has a long relationship with the Valley company as spokeswoman.

Aaron Rodgers reveals he spent his birthday with his parents after brother Jorda (12/06/18): Aaron Rodgers seemingly has turned the page with his family.

Sara Christian Competed in the First Ever NASCAR Race and Is the Only Woman To S (12/2018): The path to women taking part in sanctioned American racing had to start somewhere. Long before women like Danica Patrick and Jennifer Jo Cobb were getting behind the wheel of stock cars, we had women like Sara Christian setting the stage—and at the first ever NASCAR race to boot.

Aaron Rodgers girlfriend: Who is Danica Patrick? Meet the sporting power couple (11/2018): AARON RODGERS is widely regarded as one of the greatest NFL players of all time, but who is his girlfriend Danica Patrick?

Danica Patrick Hopeful As She Returns To Site Of Best Finish (02/2015): Since Danica Patrick's career-best sixth-place finish at Atlanta last August, she's switched crew chiefs and the rules package has been altered. But despite the changes, she remains upbeat.

Danica Patrick's hottest bikini photos (12/2014): You thought you were done seeing Danica Patrick and all her outrageous Go Daddy ads.

Danica Patrick Out Of Chase For Sprint Cup (09/2014): Danica Patrick is no longer in the running for the Chase for the Sprint Cup this year, as she failed to finish in Victory Lane at Richmond, but she certainly has proven herself a worthy member of the Stewart-Haas Racing …

Danica Patrick: Car setup key to maximizing potential (07/2014): Through 19 races, the Stewart-Haas driver is 27th in the points standings - the same ranking at this juncture in 2013. But she has improved her average finish (24.1) by two positions and her average start (21.9) by eight spots.

Danica Patrick concedes winning 'is a process' (05/2014): Danica Patrick sits on the floor of a customised motor coach in the infield of Dover International Speedway, softly petting her puppy.

Danica Patrick rescues celebrities on the Can-Am Spyder (04/2014): Popular race car star, Danica Patrick, is now moving down from a four wheel to a three wheel platform and she has already signed in with the three-wheeled Can-Am Spyder motorcycle. She will be coming...

Q&A: Danica Patrick on racing, Super Bowl ad (01/2014): NEW YORK (AP) — Danica Patrick is the most successful woman to get behind the wheel of a race car, but on Super Bowl Sunday, she's the girl in the GoDaddy commercials. Having done a dozen ads …

Danica Patrick Looking Jacked in a Muscular Body Suit Will Give You Nightmares (12/2013): No.

Danica Patrick at peace with her progress in NASCAR and personal life (11/2013): If driver needed to become more grounded, her two years in NASCAR have given her that, cowboy boots and all

GoDaddy to keep it clean with next Danica Patrick Super Bowl spot (10/2013): SCOTTSDALE, Ariz. — Don’t expect to see Danica Patrick take her clothes off, kiss a girl or do anything else risque during the next Super Bowl.

2013 AdvoCare 500: Danica Patrick not concerned about any discord at Stewart-Haa (08/2013): But with Stewart incapacitated with a broken leg sustained in a Sprint car accident, and with the opportunity present to sign the 2004 Cup champion, Haas took it upon himself to court Busch. In doing so, SHR will have to enlarge its facilities to accommodate a fourth car.

Danica Patrick Races to a Top-10 Finish at the Daytona 500 (02/2013): Danica Patrick continued to make NASCAR history at the 2013 Daytona 500, The first woman to start from the pole position, she later led the race for five laps and finished in eighth place Contributor: Patrick Hattman Published: Feb 24, 2013

NASCAR Star Danica Patrick Races Against Sonic in New Sega Game (12/2012): The popular race-car driver tells THR how she gets her game on off the track. read more

Danica Patrick reflects on recent divorce (11/2012): The Muskegon Commission agreed to sell the old fire station for $1.00. An Upper Peninsula teenager who fought to change state guidelines so he could ...

Danica Patrick's Sprint Cup schooling continues at TMS (10/2012): Texas Motor Speedway and the AAA Texas 500 on Sunday are next up in the 10-point plan to prepare Danica Patrick for Sprint Cup. She'll also run the O'Reilly Challenge on Saturday as part of her full-time Nationwide Series schedule, in which she ranks 10th in the driver standings.

So far for Danica Patrick, mixed reviews (06/2012): With just one pole won, one top 10 and an average finish of 20th, Danica Patrick's results have been average, but she's improving and believes better days are ahead.

Following Danica Patrick: Double Duty At Charlotte (05/2012): Memorial Day weekend is famous for its racing. The Indianapolis 500 and the Coca-Cola 600 are American traditions and winning one of these two are high on a driver's wish list.

Following Danica Patrick: NASCAR Nationwide & Cup Series Update (04/2012): With another off weekend for the NASCAR Nationwide Series, we thought it would be beneficial to hit a few key topics from the season up until now. Here are the hottest topics around the garage.

Following Danica Patrick: Royal Purple 300 (03/2012): By: Farrah Kaye While the IndyCar series was in St. Petersburg, Fla. for its season-opener, the NASCAR Nationwide Series was in Fontana, Calif. for the fifth race of the season at Auto Club Speedway. Danica [...]

Danica Patrick Daytona 500 Crash: Another Free Pass Due to Her Good Looks (02/2012): Far too many people are giving Danica Patrick a free pass because of her good looks.

Unusual alliance locks Danica Patrick into the Daytona 500 (01/2012): Danica Patrick will be guaranteed a spot in the Feb. 26 race via a partnership with Tommy Baldwin Racing.

Danica Patrick will become a hit in NASCAR in no time (11/2011): HOMESTEAD, Fla. -- Danica Patrick's husband gave her a stock car last Christmas. She threw a party to show it off to her friends. "But in order to go in the garage and see it, you had to drink a shot of moonshine," Patrick said. "I thought that was such a NASCAR thing to do." read more

Danica Patrick could give NASCAR an energy boost (07/2011): JEFF GORDON turns 40 Aug. 4, joining Tony Stewart in the 4-0 club. Both probably have at least 5 more years of quality racing in them.

Danica Patrick returns to NASCAR, still weighing options (06/2011): DAYTONA BEACH, Fla. - Even though everyone around her is wondering and waiting, Danica Patrick has no timetable for making a decision about her racing future.

Danica Patrick is at a crossroads on the eve of the Indy 500 (05/2011): Danica Patrick's fame was launched at the Indy 500, and it remains the race that she most wants to win. But the market value of NASCAR has many observers predicting she'll switch to stock cars full-time. Reporting from Indianapolis

Bruce Martin: Driver Danica Patrick talks Indy 500, her future in NASCAR, more (04/2011): MOORESVILLE, N.C. -- There is exactly one month to go until the 100th Anniversary of the Indianapolis 500, which means Danica Patrick is counting down the moments until she gets yet another chance to try to become the first woman to win the historic race.

Danica Patrick briefly leads, finishes in 14th place (02/2011): DAYTONA BEACH, Fla. —For a few laps, at least, Danica Patrick's day was going better than most people imagined: She was racing for the lead at Daytona International Speedway.

Danica Patrick (01/2011): As Danica Patrick gets more help in Nationwide this season, a Richard Petty Motorsports official says he'd love to see her drive for RPM in the Cup Series in the future.