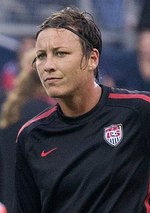 Mary Abigail Wambach (born June 2, 1980) is an American retired soccer player, coach, and member of the National Soccer Hall of Fame. A six-time winner of the U.S. Soccer Athlete of the Year award, Wambach was a regular on the U.S. women's national soccer team from 2003 to 2015, earning her first cap in 2001. As a forward, she currently stands as the highest all-time goal scorer for the national team and is second in international goals for both female and male soccer players with 184 goals, behind Canadian Christine Sinclair. Wambach was awarded the 2012 FIFA World Player of the Year, becoming the first American woman to win the award in ten years. She was included on the 2015 Time 100 list as one of the most influential people in the world. More about Abby Wambach

Current items with a signature of Abby Wambach

These are the most current items with a signature of Abby Wambach that were listed on eBay and on other online stores - click here for more items.

Traded items with a signature of Abby Wambach

The most expensive item with a signature of Abby Wambach (Abby Wambach US Women's National Team Game Worn Nike Soccer Cleats Shoes! SIGNED) was sold in April 2013 for $1030.00 while the cheapest item (abby wambach signed autograph card olympic soccer player) found a new owner for $2.25 in November 2013. The month with the most items sold (25) was December 2012 with an average selling price of $174.30 for an autographed item of Abby Wambach. Sold items reached their highest average selling price in April 2013 with $1030.00 and the month that saw the lowest prices with $9.99 was February 2018. In average, an autographed item from Abby Wambach is worth $66.00.

Most recently, these items with a signature of Abby Wambach were sold on eBay - click here for more items.

Christine Sinclair breaks record for most international soccer goals previously (01/30/20): The Canadian soccer star etched her name in the history books on Wednesday

Artist Creates Book About Historic Women After Son Asks for Paintings of Pr.. (12/07/18): An artist was inspired to create a book of portraits of powerful women after her 6-year-old son requested images of the presidents.

Artist Creates Book About Historic Women After Son Asks for Paintings of Pr.. (12/2018): An artist was inspired to create a book of portraits of powerful women after her 6-year-old son requested images of the presidents.

Insider Notes: Abby Wambach's future; France in line to host '19 WWC (03/2015): Abby Wambach announced on Wednesday that she won?t be playing in NWSL this year, and while it?s disappointing news for the Western New York Flash,...

Abby Wambach: 'I really don't want to drop the flag' (02/2015): Abby Wambach talks about being an honorary starter for this year's Daytona 500.

Abby Wambach, players drop World Cup turf suit (01/2015): A group of elite female soccer players on Wednesday withdrew their complaint over the use of artificial turf at the Women's World Cup from the Human Rights Tribunal of Ontario.

Portland Thorns lock down Abby Wambach in win against Flash (05/2014): The Thorns hold the star forward scoreless once again.

Pittsford's Abby Wambach ready to return to the Flash (04/2014): Abby Wambach has carried teams on her back with her dynamic soccer talent. She now embraces the responsibility of carrying a league...

Abby Wambach finishes second in FIFA World Player of the Year voting (01/2014): The Our Lady of Mercy High School graduate missed out on being a repeat winner of soccer's highest individual honor.

Abby Wambach passes on skills to next generation (12/2013): The Pittsford native and a couple of her teammates from the national team passed on their wisdom to Bignhamton youth.

Abby Wambach scores in U.S. women's national soccer team's win (10/2013): The Pittsford native and Mercy graduate found the net in the 56th minute of a 4-0 win over Australia on Sunday.

Abby Wambach, Flash shooting for milestone (08/2013): If the Western New York Flash beat the Portland Thorns in Saturday's NWSL Championship, they'll achieve something that has never been done before, winning a fourth straight title in a fourth different league.

Abby Wambach heads to the top of the scoring lists in record night (06/2013): HARRISON, N.J. -- On the night Abby Wambach made history, the goal came as it had so many times before. A laser of a corner kick. A giant moving target. A leap high above the rest. And, in the end, a snap header so sweet and true and powerful that no goalkeeper in the world could have stopped it.

Abby Wambach makes an impact at Binghamton clinic (12/2012): The Rochester native and gold medalist hosts a weekend clinic with national teammates Shannon Boxx and Sara Huffman for youths from the Southern Tier.

U.S. Soccer Star Abby Wambach Plays Not My Job (10/2012): Since Wambach sounds kind of like wombat, we've invited Abby to answer three questions about the cuddly marsupials. Our game will take about four minutes ... and will probably have more scoring than 90 minutes of soccer.

Abby Wambach: A legacy of leadership (08/2012): Over the past few years, Abby Wambach has become the inspirational leader of the United States women's soccer team. Interactive: Meet the team

5 questions with Abby Wambach in preparation for London Olympics (06/2012): Abby Wambach is the second-leading goal scorer in U.S. women's soccer history with 138 goals. After the United States came up...

After the dissolution of Women's Professional Soccer, Abby Wambach remains in Da (05/2012): I know you all know who Abby Wambach is. But you need to know more about her than just what she’s done with the U.S. national team.

Abby Wambach takes role as United States co-captain (02/2012): Abby Wambach, as usual, would not stop talking. On and on she went. To the point that her coach — her brand new coach, mind you — couldn’t take it any longer.