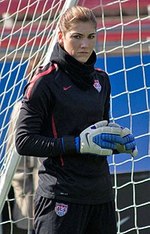 Hope Amelia Solo (born July 30, 1981) is an American former soccer goalkeeper. She was a goalkeeper for the United States women's national soccer team from 2000 to 2016, and is a World Cup champion and two-time Olympic gold medalist. After playing at the collegiate level for the University of Washington, she played professionally for the Philadelphia Charge in the Women's United Soccer Association (WUSA). When the WUSA folded after her first season, she traveled to Europe to play for the top division leagues in Sweden and France. From 2009 to 2011, she played in the Women's Professional Soccer (WPS) for Saint Louis Athletica, Atlanta Beat and magicJack. After the WPS ceased operations in early 2012, she played for the Seattle Sounders in the W-League. She most recently played for Seattle Reign FC in the National Women's Soccer League, the top division of women's soccer in the United States. More about Hope Solo

Current items with a signature of Hope Solo

These are the most current items with a signature of Hope Solo that were listed on eBay and on other online stores - click here for more items.

Traded items with a signature of Hope Solo

The most expensive item with a signature of Hope Solo (Hope Solo 2008 Donruss Americana Mirror Gold Signature RC Auto 17/25 USWNT) was sold in November 2021 for $699.99 while the cheapest item (Hope Solo Signed/ Autographed Full Size Team USA Nike Soccer Ball- JSA W Auth) found a new owner for $0.99 in July 2015. The month with the most items sold (19) was August 2012 with an average selling price of $99.99 for an autographed item of Hope Solo. Sold items reached their highest average selling price in August 2013 with $169.50 and the month that saw the lowest prices with $6.95 was May 2010. In average, an autographed item from Hope Solo is worth $46.51.

Most recently, these items with a signature of Hope Solo were sold on eBay - click here for more items.

Hope Solo arrested on alleged DWI, misdemeanor child abuse charges in North Caro (04/01/22): The former USWNT star's two children were allegedly with her during the arrest

Hope Solo's dog dies days after being shot in the leg: 'We're brokenhearted' (05/18/20): The dog wandered off of Solo and her husband's 60-acre farm before it was shot

Hope Solo's dog is in critical condition after being shot in the leg (05/15/20): It is not yet known who shot the dog

Hope Solo announces she is pregnant with twins following miscarriage last year (12/17/19): Former USWNT star is expecting one boy and one girl

Opinion: Why was Hope Solo chosen to speak at the CWA? (02/2019): The decision to include U.S. soccer player Hope Solo at the Conference on World Affairs was a mistake. By Delaney Deskin

Hope Solo Reveals She Entered Therapy to Address ''Pain and Anger'' During 30-Da (03/2015): Hope Solo is getting some hands-on treatment for the issues that have been plaguing her, both mentally and physically. The beleaguered soccer star has started a blog to keep fans...

Hope Solo's dismissed domestic violence case could be appealed (02/2015): Congratulations! Your weather is set to . You can change the location at any time. Don't have an account?

Hope Solo could be left off US World Cup roster (01/2015): Goalkeeper Hope Solo faces the possibility of being left off the American roster for this year's Women's World Cup if she fails to complete tasks set for her by the U.S. Soccer Federation, which may include alcohol counseling.

Judge Delays Decision on Whether to Dismiss Charges Against Hope Solo (12/2014): The judge in Hope Solo's case is delaying his decision on whether to dismiss domestic violence charges against the soccer star.

Abby Wambach: Hope Solo in 'different situation' than Ray Rice (10/2014): The U.S. striker stressed the need for athletes to be good role models, but says the goalkeeper's domestic violence charge is not the same as the one facing former NFL player Ra...

Hope Solo denied record as USA beats Switzerland in friendly (08/2014): The U.S. keeper is on the verge of the all-time shutouts record, but lost out thanks to a penalty.

Hope Solo caught up in another war of words (05/2014): Looks like USWNT No. 1 and Seattle Reign stopper Hope Solo has found herself in the midst of a little controversy. Shocker!

Hope Solo and the U.S. Women's Soccer Team Hitch Ride with Fans (11/2013): Being stranded on the side of the road happens to everyone, even Olympians. The U.S. women's soccer team's bus broke down Saturday on the way back to their hotel. The team had just finished practicing at the Citrus Bowl in Orlando FL. Thankfully, fans came to the rescue.

The Alamodome Doesn’t Know the Difference Between Hope Solo and Alex Morgan (09/2013): Easy to confuse Solo and Morgan, right?

Washington Spirit officially on a winning streak, with 1-0 victory over Hope Sol (08/2013): With the match still scoreless heading into the final 10 minutes, Matheson tracked a ball after a Spirit throw-in and headed towards goal.

Breakers Brace for Hope Solo and Seattle Reign (06/2013): The teams may be meeting for the first time in National Women's Soccer League (NWSL) history, but most of the players on the Breakers and Seattle Reign know each other very well, which should make for an exciting matchup Wednesday night (June 26) at Dilboy Stadium in Somerville (7 p.m. ET).

Hope Solo Added to Reign FC Roster, Available for Match Saturday Night (05/2013): Seattle, WA - May 24, 2013 - Hope Solo will be part of the Reign FC roster for the first time this season as the team prepares to play Portland Thorns FC in the second northwest derby of the NWSL season. The match is slated for 7 p.m. on Saturday, May 25 at Starfire Stadium in Tukwila, Wash.

Hope Solo tweets out cell number, then calls us all 'fools' (04/2013): Hope Solo loves her 670,214 Twitter followers -- so much so that she tweeted her personal cellphone number out to them (and the rest of the world) on Wednesday.

Hope Solo kept off U.S. soccer roster because of injury (02/2013): Standout goalkeeper Hope Solo was left off the U.S. team for next month's Algarve Cup in Portugal to have a long-standing wrist injury treated.

Hope Solo hopes new league successful (01/2013): United States national team goalkeeper Hope Solo once doubted that she would get a chance to play professional soccer in her adopted hometown of Seattle.

Hope Solo Defends Husband Jerramy Stevens: He's "Never Treated Me Poorly!" (11/2012): Hope Solo is standing by her man. The newlywed soccer star maintains that football-player hubby Jerramy Stevens, who was arrested on suspicion of domestic violence the day before they...

Hope Solo Wants A League Of Her Own, Maybe Now's Her Chance (09/2012): Frustrated with the inability of the United States to launch a viable women's soccer league, Hope Solo wants to launch one of her own.

Hope Solo Jersey (07/2012): Hope Solo is the key to the U.S. women’s national team. The outspoken goalkeeper has the game to back up her words and will be called on if the Red, White and Blue are to win the gold medal in London. And you can get an official Hope Solo replica jersey at the World Soccer Shop.

Hope Solo makes incredible diving save against Canada (06/2012): Earlier today, the United States women’s soccer team beat Canada by the score of 2-1 in a tune-up game before the 2012 Summer Olympics in London. Nearing the end of the first half of play in stoppage time, USA goalie Hope Solo came up with an incredible effort to stop a shot from Canada forward…

How Soccer Star Hope Solo Is Prepping for the Olympics … Off the Field (05/2012): The athlete discusses her struggle with sensitive skin

The paradox of Hope Solo (04/2012): PST: The US goalie enjoys her solitude and revels in the fame of "Dancing with the Stars."

Hope Solo: 'The whole ground was moving' (03/2012): No one was injured when a strong earthquake struck in northern Japan on Tuesday, but the tremor caused some scary moments for the U.S. women's soccer team, which is in Sendai, Japan for a tournament.

Hope Solo gets a familiar teammate (02/2012): Alex Morgan, a striker on the U.S. women's national soccer team, has signed with the Seattle Sounders Women as she trains for the Olympics.

Hope Solo gets down to business, leaves dancing behind (12/2011): U.S. goalie returns to team after Dancing with the Stars.