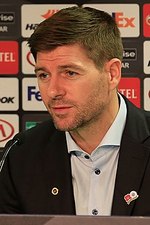 Steven George Gerrard MBE (born 30 May 1980) is an English professional football manager and former player who manages Scottish Premiership club Rangers. He spent the majority of his playing career as a central midfielder for Liverpool and the England national team, captaining both. Described by pundits and fellow professionals as one of the greatest players of his generation and one of Liverpool's greatest players, Gerrard was awarded the UEFA Club Footballer of the Year award in 2005, and the Ballon d'Or Bronze Award. A versatile and well-rounded player, highly regarded for his leadership, Gerrard is the only footballer to score in an FA Cup Final, a League Cup Final, a UEFA Cup Final and a UEFA Champions League Final, winning on each occasion. More about Steven Gerrard

Current items with a signature of Steven Gerrard

These are the most current items with a signature of Steven Gerrard that were listed on eBay and on other online stores - click here for more items.

Traded items with a signature of Steven Gerrard

Most recently, these items with a signature of Steven Gerrard were sold on eBay - click here for more items.

Rangers pull level with Celtic after 3-1 win at Hamilton (11/24/19): Rangers pulled level on points with Celtic at the top of the Scottish Premiership after Ryan Kent scored his first goals since his permanent summer switch from Liverpool in a 3-1 win against Hamilton on Sunday. Steven Gerrard's men took an early lead through Ryan Jack but were quickly pegged back

PL Classic: Man United v. Liverpool 9.19.10 (10/17/19): Take a look back to 2010, when Steven Gerrard's brace brought Liverpool back from a 2-0 deficit before Dimitar Berbatov sealed his hat trick to give Manchester United a late, memorable derby victory.

'Forget about title' - Gerrard despondent after draw (02/16/19): Steven Gerrard has told his Rangers side they can forget about ripping the title away from Celtic after their failure to fight off St Johnstone.

Steven Gerrard calls for ban on ‘dangerous’ artificial pitches (02/15/19): The move is set to be fiercely resisted by the three top-flight SPL clubs who play on plastic

Liverpool's Steven Gerrard ejected for stomping on opponent's leg (03/2015): Liverpool midfielder Steven Gerrard's time in the English Premier League is drawing to a close, and it was shortened by three games after his 38-second appearance against Manchester United on Sunday.

Steven Gerrard dropped but Liverpool prevail (11/2014): Liverpool's inspirational captain Steven Gerrard was dropped on the 16th anniversary of his club debut but manager Brendan Rodgers' surprise decision was vindicated as they arrested their slump with a 1-0 win over Stoke City at Anfield on Saturday (Sunday NZT).

Steven Gerrard hints at Liverpool move (10/2014): Talismanic Liverpool skipper Steven Gerrard said he could leave Anfield at the end of the season, when he comes off contract with the Premier League club.

Liverpool captain Steven Gerrard in numbers (09/2014): Champions Matchday has the facts and figures for Steven Gerrard's UEFA Champions League career after Liverpool FC's captain made a winning return to the competition.

Steven Gerrard retires from international duty (07/2014): At his best a midfield marauder who inspired team-mates and scored goals in equal measure, Steven Gerrard early today retired from England duty as the country's third most-capped player after an international career that promised more than it delivered.

Steven Gerrard enjoys quiet day out with family after Euro defeat (06/2012): London, June 27 (ANI): Steven Gerrard took his wife Alex and their daughters out for a bite near their Merseyside home in Formby following England's Euro 2012 disappointment.