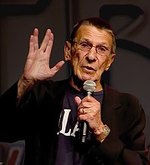 Leonard Simon Nimoy (/ˈniːmɔɪ/; March 26, 1931 – February 27, 2015) was an American actor, film director, photographer, author, singer, and songwriter. He is known for playing Spock in the Star Trek franchise, a character he portrayed in television and film for almost fifty years, from a pilot episode shot in late 1964 to his final film performance in 2013. More about Leonard Nimoy

Current items with a signature of Leonard Nimoy

These are the most current items with a signature of Leonard Nimoy that were listed on eBay and on other online stores - click here for more items.

Traded items with a signature of Leonard Nimoy

The most expensive item with a signature of Leonard Nimoy (MASTER REPLICA LEONARD NIMOY SIGNED PHASER) was sold in December 2018 for $10000.00 while the cheapest item (Autographed photo - Leonard Nimoy) found a new owner for $0.99 in August 2016. The month with the most items sold (24) was June 2019 with an average selling price of $40.00 for an autographed item of Leonard Nimoy. Sold items reached their highest average selling price in November 2017 with $179.95 and the month that saw the lowest prices with $9.95 was July 2010. In average, an autographed item from Leonard Nimoy is worth $20.00.

Most recently, these items with a signature of Leonard Nimoy were sold on eBay - click here for more items.

Leonard Nimoy still alive? (December 2018 update) - Mediamass (12/24/18): News of Leonard Nimoy’s death on February 27, 2015 stunned the world. Ever since, millions of fans worldwide have come to believe the actor’s death was a hoax and that he was still alive and well.

Leonard Nimoy’s Son to Direct Spock Documentary (03/28/15): Zachary Quinto and William Shatner will be part of the film

Leonard Nimoy ‘made sci-fi cool’ (02/2015): Leonard Nimoy made sci-fi hip and relevant. And what a legacy to leave behind. The beloved actor, who died Friday at the age of 83, will forever be known as...

Leonard Nimoy and William Shatner Star Trek 3 Rumors Go in Circles (10/2014): Leonard Nimoy has appeared in both of the new Star Trek movies directed by JJ Abrams as the old Spock. Will in the 2016 Star Trek 3 movie also have the original Captain Kirk. Rumor reports say yes...

Leonard Nimoy Pays Tribute To Late Star Trek Actress (08/2014): Leonard Nimoy has paid his respects to actress Arlene Martel following her death on Tuesday (12Aug14). Martel passed away aged 78 after recently suffering a heart attack, according to a post on Facebook.com from her friend Marc Cushman.

Leonard Nimoy To Host Boston Pops Performance (05/2014): Boston's own Leonard Nimoy is at Symphony Hall this weekend with the Boston Pops. Nimoy is hosting performances of what you could call "music from the stars."

Leonard Nimoy to be honored with hometown Emmy (04/2014): Experience Baylor summer camp - a 70 year tradition of summer fun and adventure. What are you waiting for? Make the most of summer by signing up today!

It's Leonard Nimoy's Birthday, So Here He Is Going Crazy In A Race Car (03/2014): We're big fans of Leonard Nimoy here at Los Jalops , because everyone in the world is and if you aren't then you are committing some sort of crime. It's his 83rd birthday today, so to celebrate, here he is in 1973 driving a race car during a drug-induced paranoid delusion. Read more...

Frail Leonard Nimoy wheeled through JFK (01/2014): A fragile-looking Leonard Nimoy was spotted at Kennedy Airport on Monday evening. The 82-year-old actor, famed for his role as the original Spock in “Star Trek,” was seen wearing a...

Pharrell Williams emotional after Leonard Nimoy meeting (09/2013): PHARRELL WILLIAMS was left feeling emotional after meeting LEONARD NIMOY for the first time as the STAR TREK legend has been his inspiration throughout his entire career.

Insanely lifelike sculpture of Leonard Nimoy as Mr. Spock (04/2013): This native Vulcan looks so real you might think him about to blink any second. Designer and sculptor Jordu Schell created his Mr. Spock with logical layers of silicone, hair, fabric, then finely finished with special paint.

Film Scene: William Shatner, Leonard Nimoy turning 82 (03/2013): Before we dive into the latest batch of noteworthy local indie film screenings, I'd like to thank all the readers who've let me know how much they appreciate this new column.

Star Trek's planet plea: William Shatner and Leonard Nimoy appeal to fans to hav (02/2013): The northern Californian scientific research organisation, the SETI Institute, has been asking members of the public to come up with new names for two of Pluto's moons.

Hear Leonard Nimoy sing ‘Ballad of Bilbo Baggins’ in 1967 (01/2013): Talk about an unexpected journey. Did you ever expect to see Spock singing a jaunty tune about "The Hobbit?" As they are wont to do, BuzzFeed stumbled across this bizarre and extremely precious gem of a video, in which Leonard … Continue reading →

William Shatner, Will Ferrell, Leonard Nimoy offer custom voice recordings as fu (11/2012): All it takes is $299 and some luck

Leonard Nimoy on 'Fringe' Emmy Snub: It's Ridiculous (07/2012): Reacting to 'Fringe' exclusion from 2012 Emmy nominations, the William Bell of the FOX show sarcastically says it's not a surprise because 'the Emmy has given short shrift to Star Trek for 46 years.'

Leonard Nimoy to Shuttle Enterprise: 'Live Long and Prosper' in NYC (04/2012): NEW YORK — Science fiction met fact with a "Star Trek" twist here today (April 27) when the space shuttle Enterprise, named in honor of the starship from the beloved television show, came face-to-face with Spock — Leonard Nimoy, that is.

Leonard Nimoy - Leonard Nimoy Says Goodbye To Spock And Star Trek (10/2011): Leonard Nimoy attended his last ever Star Trek convention this past weekend in Illinois The 80-year-old actor who played Mr Spock in the sci-fi television series and movies gave an hour long speech about his life before bidding adieu on Sunday 2nd Septembe...

Yes, Leonard Nimoy is retiring (08/2011): At 80 years old, the wildly popular veteran of science-fiction film and television has decided to call it a career. read more

Leonard Nimoy Describes His Jewish Roots (05/2011): ROCKVILLE, Md. (RNS) The V-shaped hand sign that made actor Leonard Nimoy famous as Mr. Spock may have seemed to be from a planet far away. But the "Star Trek" star says he created it from childhood memories of his Jewish family.

Leonard Nimoy Has Turned 80 (03/2011): Yesterday Leonard Nimoy, who created one of the most iconic characters in television history, Mr. Spock, turned 80. Spock has been both a joy and a torment to the actor ever since he first appeared on the small screen forty five years ago. Contributor: Mark Whittington Published: Mar 27, 2011