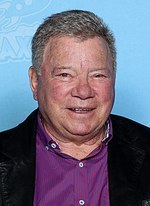 William Alan Shatner OC (born March 22, 1931) is a Canadian actor. In a career spanning seven decades, he is best known for his portrayal of Captain James T. Kirk of the USS Enterprise in the Star Trek franchise; from the second pilot in 1965 to his final appearance as Kirk in Star Trek Generations (1994). More about William Shatner

Current items with a signature of William Shatner

These are the most current items with a signature of William Shatner that were listed on eBay and on other online stores - click here for more items.

Traded items with a signature of William Shatner

The most expensive item with a signature of William Shatner (STAR TREK: YEAR 4 CGC 10.0 GEM MINT PHOTO COVER WILLIAM SHATNER SIGNED ONLY ONE!) was sold in January 2022 for $10000.00 while the cheapest item (Star Trek CCG Autograph William Shatner) found a new owner for $0.99 in November 2021. The month with the most items sold (63) was February 2019 with an average selling price of $26.51 for an autographed item of William Shatner. Sold items reached their highest average selling price in August 2018 with $499.99 and the month that saw the lowest prices with $9.95 was May 2010. In average, an autographed item from William Shatner is worth $51.00.

Most recently, these items with a signature of William Shatner were sold on eBay - click here for more items.

William Shatner's Trip To Space Was Way Darker And Sadder Than He Expected (10/07/22): William Shatner went where few have gone before, but the experience was not what he expected.

William Shatner Gives Thanks After Star Trek Actors And Fans Share Birthday Wish (03/2022): As William Shatner celebrated his 91st birthday, a lot of people in and out of the Star Trek world reached out to wish him well.

William Shatner's TekWar Is Getting a Mixed-Reality Adult Animated Reboot (09/2021): Star Trek actor William Shatner is bringing 90s series TekWar back as an immersive TV experience for a new generation.

Wear Yellow For Seth: Ashton Kutcher and William Shatner among celebs to support (04/2015): A little boy living with a life-threatening condition has received morale-boosting messages support from a host of top celebrities after an online awareness campaign.

William Shatner Memorializes Leonard Nimoy on Twitter Amid Backlash Over Funeral (02/2015): Shatner spoke out about criticism that suggested he wasn't making enough of an effort to attend his 'Star Trek' co-star's Sunday funeral.

William Shatner knows the ups, downs of traveling - Quincy Herald-Whig | Illinoi (01/2015): LOS ANGELES (AP) - William Shatner is back as a shrewd, unflappable travel expert in his latest TV commercial for an online company. But in real life, even Shatner can't avoid the perils of getting through airport security lines.

William Shatner zaps Twitter over ‘marketing scheme’ (12/2014): Actor William Shatner zapped micro-blogging service Twitter over its practice of surreptitiously inserting promoted companies into a user's list of followers. He went so far as to call out no less than Twitter head co-founder Jack Dorsey and the entire Twitter safety team about it.

The making of William Shatner’s new kitchen: Stars show off home renovation on D (10/2014): The "Star Trek" icon shows off his personal overhaul on "The William Shatner Project."

William Shatner, George Takei: Strange Quid Pro Quo (08/2014): Over the years, the enmity between William Shatner and George Takei has popped up over and over again. The two Star Trek alum take shots at each other from time to time in the media. But no one is really …

William Shatner blasts Zuckerberg’s celebrity-only app (07/2014): Mark Zuckerberg launched a new app for celebrities — and Captain Kirk immediately blasted it with his phaser. OK, so it wasn’t a phaser. It was a blog. Still, Facebook’s...

William Shatner Freaks Out About "Nobodies" Being Verified on Twitter (06/2014): That little blue "verified" checkmark on Twitter means something. It's for stars, people the common folk aspire to emulate. People whose valuable Personal Brands™ are at stake. People like William Shatner. And definitely not those pissant " nobodies " in the media. Read more...

'Star Trek' Legend William Shatner -- I Support J.J. Abrams Directing 'Star Wars (10/2013): Unlike the rest of the nerd universe, Captain Kirk (aka William Shatner) isn't offended that J.J. Abrams is directing the new "Star Wars" AND "Star Trek" flicks at the same time -- in fact, he thinks it's "wonderful."There's been a lot of backlash over… Permalink

Glasvegas talk new single If and teaming up with William Shatner (06/2013): Glasvegas make their return this summer with a brand new album, which sees the four-piece come back with more soul-searching, melancholy indie rock, written and self-produced by lead vocalist and songwriter James Allan.

William Shatner champions ‘Vulcan’ to top of polls in Pluto moon vote (02/2013): The two newly discovered moons of Pluto now have names, and we have Star Trek's William Shatner to thank for one of them! When astronomers at the SETI Institute decided that Pluto's new moons — formally named 'S/2011 (134340) 1' … Continue reading →

William Shatner to perform one-man show in SLO (12/2012): William Shatner will bring his show, “Shatner’s World: We Just Live In It,” to San Luis Obispo's Cohan Center on Jan. 19.

How William Shatner's Priceline 'Negotiator' Was Nearly Resurrected As A Half Ma (08/2012): Shortly after Priceline sent its 14-year spokesman, William Shatner, to his fiery death , the team involved realized it might have made a mistake.

William Shatner's pants shame at airport (06/2012): Star Trek legend William Shatner was left nursing a bruised ego when his trousers fell down during an airport security check in front of dozens of fellow travellers.

SLIDESHOW: "Star Trek's" William Shatner unveils sculpture at the Frazier (05/2012): It's a duplicate of an artwork from his own home.

'CMT Artist Of The Year': William Shatner Presents Brad Paisley's Award With A B (12/2011): The "CMT Artist of the Year" (Tue., 9PM ET on CMT) is an opportunity for country music to honor those people who are making a difference in the industry and beyond. There's no real competition within the night, nor are there different categories.

Shooting the Shat with William Shatner (10/2011): When you get an e-mail offering you the chance to talk to William Shatner, there's no need to deliberate. This not a Nomad-esque brain-busting question. Of course you want to talk to Captain Kirk...

William Shatner serves a Starfleet six-pack (07/2011): Sitting in a starship captain's chair is a big job. Making a documentary about the actors whose posteriors have occupied that hallowed space through four decades of "Star Trek" and its spinoffs takes a big man. Thank the Vulcan gods that William Shatner was available.

William Shatner's ‘Carmageddon’ tweet: Watch my documentary (06/2011): William Shatner took to Twitter on Thursday to get behind the Los Angeles Police Department's plea to get the word out about the mid-July closure of the 405 Freeway.

William Shatner to receive honorary degree from McGill University (05/2011): Montreal native began his acting career at the school in the 1940s, appearing in amateur theatre productions

William Shatner Gets Birthday Greeting from NASA (03/2011): NASA was among the fans that extended greetings to William Shatner on his 80th birthday, Space.com reports. "We want to wish happy birthday to @WilliamShatner -- someone who continues to boldly go!" a NASA representative wrote on Twitter.