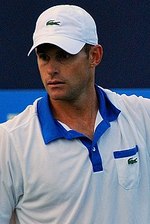 Current items with a signature of Andy Roddick

These are the most current items with a signature of Andy Roddick that were listed on eBay and on other online stores - click here for more items.

Traded items with a signature of Andy Roddick

The most expensive item with a signature of Andy Roddick (Andy Roddick Signed & Framed Tennis Racquet (Racket)) was sold in December 2011 for $650.00 while the cheapest item (Andy Roddick Tennis Player Autographed 3x5 Index Card w/coa) found a new owner for $0.75 in January 2019. The month with the most items sold (24) was July 2009 with an average selling price of $10.51 for an autographed item of Andy Roddick. Sold items reached their highest average selling price in June 2014 with $132.75 and the month that saw the lowest prices with $0.75 was January 2019. In average, an autographed item from Andy Roddick is worth $17.68.

Most recently, these items with a signature of Andy Roddick were sold on eBay - click here for more items.

Andy Roddick: Safe investments can be sexy (03/12/15): Andy Roddick is a patient investor of the the $20 million in prize money he racked up during his successful playing career. Pro athletes are known for investing in flashy things like restaurants, night clubs and car dealerships.

Andy Roddick: Time to scrap Hawk-Eye (12/29/14): When Andy Roddick played tennis, the grand slam winner and former world No. 1 never shied away from conversing, or arguing with chair umpires.

Andy Roddick to play for new Austin Aces in WTT (06/2014): Andy Roddick is ready to compete for the World Team Tennis title this summer, switching gears from owner to player for his hometown Austin Aces.

Brooklyn Decker refuses to play tennis with Andy Roddick. (04/2014): The 27-year-old actress - who married the US tennis ace in April 2009 - admits she finds the idea of trying to compete against him on the court "depressing," but says they do battle "over the craziest things" at home.

Catching up with Andy Roddick (03/2014): KVUE's Matt Mitchell was on hand as the Andy Roddick teed it up for a good cause, his eponymous Foundation. A-Rod on his March Madness bracket and his thoughts on returning to the pro circuit.

Andy Roddick still gets fun out of game (02/2014): Andy Roddick once got paid exclusively from his work on the tennis court, but occasionally some loud, brash opinions came as a byproduct.

Andy Roddick Serves Up Lackluster Impression of Jay Z's Grammy Acceptance Speech (01/2014): Let's face it. If you're going to do an impression for the whole world to see, it's probably best to make sure you can at least do it well. Case in point? This...

Andy Roddick, James Blake and Martina Hingis hit the exhibition circuit (12/2013): Andy Roddick and James Blake dusted off their rackets to join John Isner and other celebrities for a pair of charity exhibitions in New York and New Jersey last week.

Brooklyn Decker Goes Without Makeup on Date Night With Husband Andy Roddick (11/2013): Andy Roddick is a lucky man! Wife Brooklyn Decker didn't dress up for the date night on Wednesday, Nov. 27, but she still looked beautiful -- even without makeup.

Andy Roddick's 'drunk dancing' vs. Victoria Azarenka 'twerking' (09/2013): Twerking vs. Drunk Dancing. No, this is not a fall sorority hazing ritual.

Morning Swim: Why Brooklyn Decker and Andy Roddick chose to live in Western Nort (07/2013): Your daily rundown of the latest news, videos, photos and all things SI Swimsuit.

Andy Roddick ready to serve viewers (05/2013): Fox Sports 1’s hiring of Andy Roddick may have felt like a gimmick, but it’s a nothing-to-lose move

2 Comments for Andy Roddick Officially Removed From The ATP Rankings (02/2013): Lazlo : WB I am thinking that Fed has a chance again. I would like Fed to keep his ranking. Humble Rafa : Rafa was on the massage table! – The lady that massages me wants to talk to you.

Daily Bagel: Australian Open, Andy Roddick's void, Bernard Tomic's win (01/2013): Laura Robson: "I just have to say I feel I was playing better in NY. I thought today was pretty ugly." Phew. Glad we all agree. #ausopen 1 hour ago I stand corrected. Gap wider than I thought.

Dan DAddona: Andy Roddick was part of greatest era in tennis history (12/2012): At first glance, it is easy to look at Andy Roddick’s career as a disappointment. At age 20, he burst on to the tennis scene, winning the U.S. Open, and America’s love for the next generation of U.S. stardom began.

Andy Roddick tops list of 10 chosen for Palm Beach County Sports Hall of Fame (10/2012): Andy Roddick’s rise to tennis royalty made him the reluctant face of the American game, a player whose unpredictable persona ranged from witty to wary in the presence of the media.

Andy Roddick's retirement has his bulldog excited (08/2012): Washington, Sept 1 (ANI): Andy Roddick's wife Brooklyn Decker tweeted a smiling picture of their dog, to show that their pet is happy with his master's retirement news.

Andy Roddick loses on 1st day of French Open (05/2012): It's easy to understand why Andy Roddick never much enjoyed playing on red clay. First and foremost, the footing is tricky. The soft courts take his booming serves and forehands down a notch, too. Put simply, his game...

Brooklyn Decker & Andy Roddick Won't Make Good Doubles Partners (04/2012): But the model-actress says she and her tennis star husband do enjoy exercising together

Serena Williams and Andy Roddick, returning from injuries, bounced from Sony (03/2012): KEY BISCAYNE, Fla. - It was not the script American tennis fans would have written. Less than 24 hours after...

Brooklyn Decker: Pictures of Andy Roddick’s Model Wife [PHOTOS] (01/2012): Andy Roddick had to drop out of the Australian Open last week because of a hamstring injury, but it’s hard to feel bad about him when we know model wife Brooklyn Decker will be taking care of him.

Andy Roddick, Tennis Community Mourn Loss Of Agent Ken Meyerson (10/2011): Our condolences go out to the friends of family of tennis agent Key Meyerson who passed away earlier this morning at the age of 47. Meyerson, who’s been involved in tennis for 20+ years, was the head of the Lagardere Agency’s tennis division.

Andy Roddick withdraws from Legg Mason Classic due to oblique strain (07/2011): Andy Roddick's matches have long been a prime attraction at the Legg Mason Tennis Classic, but the three-time champion won't make his usual appearance at Rock Creek Park next week. Roddick on Thursday pulled out of this year's Legg Mason with what organizers described as a Grade 2 strain of ...

Tennis: Wimbledon 2011: Knocking out Andy Roddick is best win of my career, says (06/2011): FELICIANO LOPEZ hailed his shock victory over Andy Roddick as his best career win after finally breaking his duck against the American at the eighth attempt.

Andy Roddick tired of US tennis questions (05/2011): Andy Roddick, understandably, is rather tired of hearing the question, in one form or another: What's wrong with U.S. tennis?

Andy Roddick falls and so does U.S. tennis (03/2011): Where are the Americans at the Sony Ericsson? There's no one else. Can you believe it? Finding an American tennis player winning right now is like finding my wallet at home. Is it on the desk? No. The stairs? No. The couch?

For Andy Roddick, March is critical - Tennis (02/2011): Andy Roddick has stumbled in the Slams, but that's OK. It's getting close to the U.S. springtime Masters Series events, where he always shines.