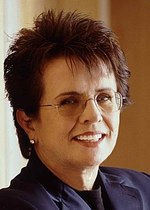 Billie Jean King (née Moffitt; born November 22, 1943) is an American former world No. 1 tennis player. King won 39 major titles: 12 in singles, 16 in women's doubles, and 11 in mixed doubles. King was a member of the victorious United States team in seven Federation Cups and nine Wightman Cups. For three years, she was the U.S. captain in the Federation Cup. More about Billie Jean King

Current items with a signature of Billie Jean King

These are the most current items with a signature of Billie Jean King that were listed on eBay and on other online stores - click here for more items.

Traded items with a signature of Billie Jean King

Most recently, these items with a signature of Billie Jean King were sold on eBay - click here for more items.

At the U.S. Open, 5 Artists Get a Place in the Sun (08/25/22): Five sculptures, created by artists from underrepresented communities, will find a place in the sun at the Billie Jean King National Tennis Center in Queens until Sept. 11.

Ukraine Team Finds Escape, and Almost an Upset, Against U.S. (04/17/22): A supportive crowd in Asheville, N.C., watched the Ukrainians nearly pull off an upset of the United States in a Billie Jean King Cup qualifier.

U.S.T.A. Plans to Move Forward With U.S. Open Amid Pandemic (06/15/20): The plan for a doubleheader of tournaments at the U.S.T.A. Billie Jean King National Tennis Center still needs formal government approval. And it’s unclear how many players will take part.

Coronavirus: US Open tennis complex turned into temporary hospital amid COVID-19 (04/01/20): The Billie Jean King National Tennis Center, located in Queens, started being used as a medical facility on Tuesday

Billie Jean King: An Ambassador For Age (12/2014): Billie Jean King still remembers the first time she realized tennis was going to be the love of her life.

Billie Jean King returns to Cal State L.A. to give life, tennis advice (10/2014): Before she arrived, many of the kids didn't know who she was — "A neat lady who helps people and stuff," was one of the best guesses — but Billie Jean King was hardly deterred.

Billie Jean King Swings By TWC Studios at US Open (08/2014): Tennis legend Billie Jean King stopped by the Time Warner Cable studios at the U.S. Open on Wednesday, where she signed autographs and answered questions at the tennis center that bears her name.

Cowboys coach has inspirational talk with tennis legend Billie Jean King (07/2014): Jason Garrett is more than willing to take advice and inspiration from any successful person, even if it's someone who admits to not knowing much about the NFL.

Long Beach icon Billie Jean King lends support to Collins' coming-out (02/2014): Jason Collins has been overwhelmed by the support he's received from people since singing a contract with the Brooklyn Nets to become the first openly gay athlete in the four major sports.

Why Billie Jean King changed tennis forever (11/2013): Legend, so the cliche goes, is an overused word in sport.

Fresh Air Weekend: Snowden Leaks, Billie Jean King And Jonathan Lethem (09/2013): Journalist Barton Gellman recounts how he began corresponding with whistle-blower Edward Snowden, a new documentary looks at King's legacy as both a tennis champion and the leader of a female player uprising, and Lethem's new novel was inspired by his own family story.

Billie Jean King looks back at her '70s struggles (08/2013): BEVERLY HILLS, Calif. - It was dubbed "The Battle of the Sexes" when Billie Jean King and Bobby Riggs challenged each other to a wrenching game of tennis in 1973.

Billie Jean King: I told Riggs this was not about money, but history and equalit (06/2013): EXCLUSIVE: WIMBLEDON champ Billie tells why she accepted $100k challenge

Billie Jean King says boys 'always get more attention' (05/2013): Billie Jean King discusses the future of tennis, being outed and what it means for gay athletes now that Jason Collins and Brittney Griner have come out.

Star Surveillance: J.Lo + Casper, Zac Brown, ‘Real Housewives of Orange County’ (04/2013): The parade of stars at play in our desert kingdom continues to grow every weekend as more and more celebrities uproot themselves from New ...

Billie Jean King at home on center court, center stage (12/2012): When the tennis great walked into the room Monday at the Indiana Repertory Theatre, the audience got to its feet and clapped.

Serena Dominates in Madrid, Billie Jean King & Murphy Visit DC (05/2012): Green, red or blue -- it doesn't matter what color the clay is when Serena Williams is playing on the surface this season.

Billie Jean King Says Exercise Your Best Shot Against Arthritis (08/2011): WEDNESDAY, Aug. 31 (HealthDay News) -- Tennis legend Billie Jean King is serving up a powerful shot against an old opponent, arthritis, in a new campaign that stresses the benefits of exercise for people with the condition.

Billie Jean King Speaks At University Of Vermont (05/2011): BURLINGTON, Vt. — Tennis great Billie Jean King told University of Vermont graduates that relationships are everything because "you never know when you're going to touch another person's life or how they will touch yours."

Billie Jean King to give UVM speech (01/2011): BURLINGTON — Tennis great Billie Jean King is scheduled to deliver the 2011 commencement address at the University of Vermont. ... - The Associated Press