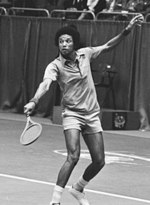 Arthur Robert Ashe Jr. (July 10, 1943 – February 6, 1993) was an American professional tennis player who won three Grand Slam singles titles. He was the first Black player selected to the United States Davis Cup team and the only Black man ever to win the singles title at Wimbledon, the US Open, and the Australian Open. He retired in 1980. He was ranked world No. 1 by Rex Bellamy, Bud Collins, Judith Elian, Lance Tingay, World Tennis and Tennis Magazine (U.S.) in 1975. In 1975 Ashe was awarded the 'Martini and Rossi' Award, voted for by a panel of journalists, and the ATP Player of the Year award. In the ATP computer rankings, he peaked at No. 2 in May 1976. More about Arthur Ashe

Current items with a signature of Arthur Ashe

These are the most current items with a signature of Arthur Ashe that were listed on eBay and on other online stores - click here for more items.

Traded items with a signature of Arthur Ashe

The most expensive item with a signature of Arthur Ashe (Arthur Ashe Autographed Bancroft Tennis Racquet Cover with Racquet c1970. 4 5/8) was sold in June 2018 for $1100.00 while the cheapest item (Original ARTHUR ASHE Signed TENNIS Player Magazine Page Autograph JSA LOA) found a new owner for $0.99 in October 2014. The month with the most items sold (6) was February 2008 with an average selling price of $13.74 for an autographed item of Arthur Ashe. Sold items reached their highest average selling price in June 2018 with $1100.00 and the month that saw the lowest prices with $2.50 was March 2008. In average, an autographed item from Arthur Ashe is worth $51.50.

Most recently, these items with a signature of Arthur Ashe were sold on eBay - click here for more items.

Arthur Ashe statue in Virginia vandalized with 'White Lives Matter' graffiti (06/18/20): Ashe is the only African American man to win the Australian Open, US Open and Wimbledon

Arthur Ashe: More than an athlete, a leader (02/11/15): By: CBS Web Staff In the 60s and 70s Arthur Ashe was ranked among the top tennis players. He was raised in the south during segregation and became the first African American male to win a Grand Slam tournament.  Ashe was more than just an athlete. ...

Arthur Ashe's little brother and the sacrifice he made (10/27/14): “I decided Arthur didn’t need to be in Vietnam. That’s an experience he didn’t have to live. There was no reason for him to live that experience. He could get all he needed to know about that experien

Petition urges mayor to help find permanent home for Arthur Ashe exhibit (07/2013): The petition, which has drawn 129 signatures, is addressed to Jones and says the exhibit “belongs in Richmond, one of America’s best tennis towns.”

Tide’s Proskura wins Arthur Ashe Award (05/2013): The University of Alabama’s Daniil Proskura was selected as the winner of the Intercollegiate Tennis Association’s Arthur Ashe Leadership & Sportsmanship Award for the Southern Region on Wednesday.

General News. 12 Student-Athletes Earn Arthur Ashe Award (04/2013): The Arthur Ashe Sports Scholar Award is one of the most prestigious awards a student-athlete can receive. The award originally was in honor of Arthur Ashe, a world renowned tennis player, who showed outstanding achievement both on and off the court.

Black History: Arthur Ashe (02/2013): Each morning during the month of February, we are celebrating Black History Month with the help of students from the Horizon Science Academy....

Arthur Ashe estate up for auction (01/2013): The largest collection ever of Arthur Ashe memorabilia will be auctioned off next week on the 20th anniversary of the tennis legend's death, with everything from his trophies to his wisdom teeth up for grabs.

His match, and his retirement, put off for at least another day, Andy Roddick st (09/2012): Sports wire He'll try to prolong his U.S. Open -- and his professional tennis career -- on Wednesday.