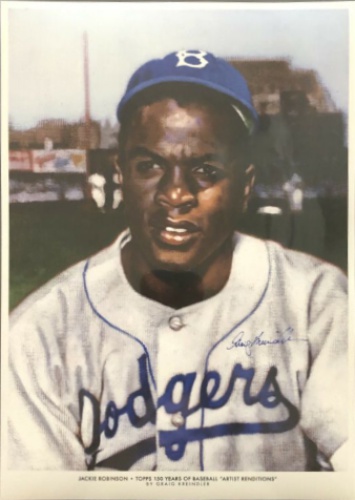 Jack Roosevelt Robinson (January 31, 1919 – October 24, 1972) was an American professional baseball player who became the first African American to play in Major League Baseball (MLB) in the modern era. Robinson broke the baseball color line when he started at first base for the Brooklyn Dodgers on April 15, 1947. When the Dodgers signed Robinson, it heralded the end of racial segregation in professional baseball that had relegated black players to the Negro leagues since the 1880s. Robinson was inducted into the Baseball Hall of Fame in 1962. More about Jackie Robinson

Current items with a signature of Jackie Robinson

These are the most current items with a signature of Jackie Robinson that were listed on eBay and on other online stores - click here for more items.

Traded items with a signature of Jackie Robinson

If you're interested in Jackie Robinson Rookie cards you might want to take a look at our sister site that specializes in Baseball Rookie Cards only.

The most expensive item with a signature of Jackie Robinson (Impressive 1950s Jackie Robinson Single Signed ONL Baseball PSA/DNA LOA #AF05792) was sold in November 2019 for $14999.00 while the cheapest item (JACKIE ROBINSON REPLICA SIGNATURE BASEBALL) found a new owner for $0.11 in October 2010. The month with the most items sold (45) was June 2020 with an average selling price of $10.00 for an autographed item of Jackie Robinson. Sold items reached their highest average selling price in September 2018 with $1562.50 and the month that saw the lowest prices with $1.95 was November 2018. In average, an autographed item from Jackie Robinson is worth $59.99.

Most recently, these items with a signature of Jackie Robinson were sold on eBay - click here for more items.

Jackie Robinson Museum Focuses on Civils Rights and Baseball (07/25/22): Robinson accomplished a great deal on the field, but a museum celebrating his life — that will have a ribbon-cutting this week — puts as much focus on his civil rights work.

LOOK: Dodgers unveil statue of Sandy Koufax at Dodger Stadium before Saturday's (06/18/22): The Dodgers honored the World Series-winning pitcher with a statue alongside his legendary former teammate, Jackie Robinson

White Sox-Yankees benches clear, Tony La Russa accuses Josh Donaldson of making (05/21/22): Anderson said Donaldson referred to him as 'Jackie [Robinson]' during the game; Donaldson claimed it was a joke between them

Before Brooklyn: the secret heroes who helped break baseball’s color barrier (02/2022): Jackie Robinson is rightfully lauded for his role in the desegregation of baseball. But many others, from writers to train porters, helped the process Members of the Homestead Grays were recommended to the Pittsburgh Pirates but the club did not respond. Photograph: Library of Congress Decades after

Vandalized Jackie Robinson marker will be displayed at Negro Leagues Baseball Mu (01/2022): The NLBM says it will 'serve as a reminder that the ugliness of America's past persists to this day'

Jackie Robinson Day: More than 100 MLB players donate game-day salaries to the P (04/2021): The Players Alliance works to promote Black participation at all levels of baseball

Jackie Robinson featured on collector's edition cover of MLB The Show 21 (02/2021): The game is set to be released in April

Passan: MLB's first foray into social justice activism was a disorganized mess - (08/2020): The week the sport celebrated Jackie Robinson Day, players showed that in baseball, the most powerful thing isn't your arm or your bat. It's your voice.

'If not now, when?': Black MLB players past and present on what needs to change (07/2020): Is the game of Jackie Robinson fulfilling its promise? As the conversation about race in America continues, some of baseball's most prominent Black stars share their experiences.

MLB players honor Jackie Robinson on anniversary of historic debut: 'Today is bi (04/2020): There can't be any on-field tributes, but that hasn't stopped players from honoring Robinson

Another Robinson centennial worth celebrating | Opinion (02/2019): The two Robinsons complement one another. Jackie was a child of the Great Migration, Eddie of the Deep South.

Oldest living Dodgers fan always excited to see Jackie Robinson (04/2017): The first Dodgers game Irving Piken remembers was in 1917, when he was just 8 and the team was called the Brooklyn Robins. And his favorite player of all time? Jackie Robinson.

Only on 11: Man who played 'Negro League' baseball with Jackie Robinson visits M (02/2015): Students in Monroe got a look into the past Thursday when Negro League baseball player Ted Toles visited. WTOL 11 had the only cameras rolling at the time.

Former Dodger George 'Shotgun' Shuba dead at 89; Ohio native known for handshake (09/2014): Shuba, who was white, congratulated his teammate on the Montreal Royals near home plate after Robinson hit a three-run homer on April 18, 1946,

Jackie Robinson T-shirts being offered for big bucks online (08/2014): Those bright yellow T-shirts celebrating the success of the Jackie Robinson West Little League team are being sold on eBay — for up to triple the original price.

Overhaul planned for Jackie Robinson Pkwy. (05/2014): A massive two-year project is slated to begin at the end of this year to completely overhaul the entire length of the Jackie Robinson Parkway.The $12 million project, announced at last week’s Communit

How Jackie Robinson shaped the Dodgers (03/2014): WANT to know more about the Los Angeles Dodgers and the Arizona Diamondbacks ahead of their SCG series? Then you’ve come to the right place.

Jackie Robinson, Jeremy Lin have pioneered change in sports, society (11/2013): The documentary Sport in America: Our Defining Stories, a collaboration between Sports Illustrated and HBO Sports, debuts Thursday at 6 p.m. on HBO.

On This Day: Jackie Robinson is first black Major League Baseball player (10/2013): The star, who scored 137 home runs for Brooklyn Dodgers, broke the 'colour line' imposed after the African American Moses Walker played one season in 1884

David Moulton: Fitting that Mariano Rivera will be the last to wear Jackie Robin (09/2013): Some numbers have a perfect rhyme and reason to them. In baseball we now have another.

Jackie Robinson's daughter shares his legacy with Paterson students (06/2013): History lessons come in many forms. At Paterson’s Norman S. Weir School, history came to life last week when Jackie Robinson’s daughter, Sharon, made an appearance to talk about how her father broke the segregation barrier in major league baseball more than 60 years ago.

Jackie Robinson and a Barrier Unbroken (05/2013): In the film “42,” Phillies Manager Ben Chapman is portrayed accurately as a meanspirited, unreconstructed bigot.

Op-ed: Who Will Be the Gay Jackie Robinson ? (03/2013): As baseball's opening day approaches, Bruce Silverman wonders when a gay player in any league will feel encouraged enough to step up to the plate and come out. read more

The Upcoming Jackie Robinson Movie Looks Awesome (09/2012): It's unclear why it took Hollywood so long to make a proper movie about Jackie Robinson, one of the great Americans of all-time. But a look at the trailer below for '42,' which is due out next summer makes it seem like the wait may have been worth it.

Ed Stevens, a Dodger Replaced by Jackie Robinson, Dies at 87 (07/2012): Mr. Stevens was one of two first basemen Jackie Robinson replaced when he broke the major league color barrier with the Dodgers in April 1947.

Barack Obama & Jackie Robinson: President Wants To Visit '42' Set (06/2012): Movie studios often invite members of the press to the sets of upcoming films as a way to build buzz. In the case of Barack Obama, however, no invitations are needed.

Choctaw native lands big role in Jackie Robinson biopic '42' (05/2012): Over the years, Ryan Merriman has cheated death in "Final Destination 3," been "Touched By an Angel" in the TV series of the same name and tossed footballs and dribbled basketballs in various roles.

Gallery: Baseball celebrates Jackie Robinson Day (04/2012): NEW YORK (AP) — LaTroy Hawkins has heard the stories from his 87-year-old grandfather, about his days of picking cotton in Mississippi, about the times when there were no black players in big league baseball.

Dodgers to enhance bond with Jackie Robinson's legacy (03/2012): The first words Magic Johnson spoke in an interview Wednesday had nothing to do with the price his group paid to buy the Dodgers, or how he would make the team better.

Stamford Legend Jackie Robinson Would Be 93 (01/2012): STAMFORD, Conn. — Baseball legend and former Stamford resident Jackie Robinson would have turned 93 on Tuesday, his official website says. He was born on Jan. 31, 1919, in Cairo, Ga., and died Oct. 24, 1972, in Stamford. Robinson is most remembered for breaking the racial barrier in ...

The day Jackie Robinson captivated Husky Stadium (11/2011): In 1939, a 13-year-old Boy Scout saw a UCLA player help defeat Washington. Less than a decade later, that player would change the face of another sport forever.

Jackie Robinson and the Jews (08/2011): When Jackie Robinson broke baseball’s color line in 1947, he inspired blacks and Jews alike. But the role of Jews in baseball was surprisingly complicated, a new book reveals.

Harper Compared to Jackie Robinson (07/2011): The Washington Nationals' director of player development has clarified remarks in which he compared No. 1 draft pick Bryce Harper to Hall of Famer Jackie Robinson.

Jackie Robinson’s daughter speaks at Rolling Hills (06/2011): When Sharon Robinson is asked to give an example of her father Jackie’s courage, she tells a story not from the baseball diamond but from a time with her family.

Jackie Robinson saluted throughout the majors (04/2011): Jackie Robinson's family took part in a pregame tribute at Yankee Stadium on Friday, on the 64th anniversary of the day he broke baseball's color barrier. Friday was Jackie Robinson Day in Major League Baseball. All...