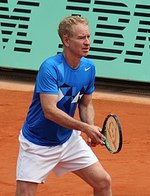 John Patrick McEnroe Jr. (born February 16, 1959), nicknamed Johnny Mac, is an American former professional tennis player. He was known for his shot-making and volleying skills, in addition to confrontational on-court behavior that frequently landed him in trouble with umpires and tennis authorities. More about John McEnroe

Current items with a signature of John McEnroe

These are the most current items with a signature of John McEnroe that were listed on eBay and on other online stores - click here for more items.

Traded items with a signature of John McEnroe

The most expensive item with a signature of John McEnroe (JOHN MCENROE SIGNED REBEL WITH A CAUSE LTD NIKE POSTER US OPEN COURT 16360 STE) was sold in January 2018 for $1699.99 while the cheapest item (ivan Lendl and John Mcenroe Autographed Giant Tennis ball) found a new owner for $1.25 in February 2022. The month with the most items sold (10) was January 2019 with an average selling price of $38.46 for an autographed item of John McEnroe. Sold items reached their highest average selling price in October 2021 with $502.75 and the month that saw the lowest prices with $5.54 was November 2022. In average, an autographed item from John McEnroe is worth $48.79.

Most recently, these items with a signature of John McEnroe were sold on eBay - click here for more items.

John McEnroe Gets His Revenge (09/05/22): While other stars fade, the notorious “Super Brat” has become a subject of fascination and a ubiquitous presence, inside tennis and outside it, too. You have a problem with that?

John McEnroe: Novak Djokovic will be 'the bad guy the rest of his career' after (09/08/20): McEnroe knows a thing or two about being a villain

Bill Gates And John McEnroe Join Larry Ellison At His Tennis Tournament Near Pal (03/16/15): Two of the richest men in the world and tennis champ McEnroe werer together at the BNP Paribas Open in Indian Wells, California.

John McEnroe to play in Connecticut Open Legends event (02/26/15): On Thursday, Aug. 27, Blake will play Roddick, and on Friday, Aug. 28, McEnroe will battle Courier. Both matches will be the second match of the evening session, following the WTA quarterfinal and semifinal matches, respectively.

Ten Questions: John McEnroe (01/2015): TENNIS legend John McEnroe is in Melbourne commentating on the Australian Open for ESPN. He talks about sledging and passion.

Top 10 sporting slapdowns: Craig Bellamy, Zlatan Ibrahimovic, Alex Higgins and J (12/2014): SAM TORRANCE joined the greats this morning when he delivered one of the greatest jibes in the history of sport but there’s more. Loads more.

John McEnroe's son arrested during drug bust bought BAKING SODA thinking it was (10/2014): Kevin McEnroe, 28, was arrested in July in Manhattan when police officers witnessed him purchasing six bags of white powdery substance they believed to be cocaine.

John McEnroe, Martina Navratilova help kick things off (08/2014): Fireworks, strobe lights, thumping music and gyrating dancers on the court of Arthur Ashe Stadium. It can only mean one thing: the official start of the U.S. Open.

John McEnroe and a dynasty cursed by drugs (07/2014): Kevin McEnroe was arrested just a few streets away from the spot in New York where his mother was caught buying crack cocaine from a vagrant six years ago.

John McEnroe wins over Portland, but doesn't win his match, in memorable legends (02/2014): When these former champions got down to business on Moda Center's makeshift wooden court, their competitive spirit was unmistakable.

John McEnroe: If you love the game of doubles, set it free (01/2014): McEnroe says that "maybe (doubles specialists) can start their own tour and we can see how successful they'd be on their own.

“You Cannot Be Serious!” John McEnroe Helps Promote Family Gadget Insurance From (12/2013): The John McEnroe thirty second advert is just one of a new set of television adverts from the specialist gadget insurer Protect Your Bubble launching on Christmas Eve. (PRWeb December 24, 2013) Read the full story at http://www.prweb.com/releases/2013/12/prweb11447086.htm

John McEnroe, Kei Nishikori face off in charity match to benefit Japan's earthqu (11/2013): TOKYO (AP) -- Seven-time grand slam singles champion John McEnroe gave Japan's top player a run for his money on Sunday before losing 1-6, 6-4 and 10-7 in a tiebreaker in a charity match for the victims of the 2011 earthquake and tsunami.

John McEnroe Senior recalls a stellar life as father to top tennis athlete John (10/2013): John Patrick McEnroe Senior raised one of the world’s most famous and successful athletes, his tennis playing son John Junior. He talks to DEBBIE McGOLDRICK about his own life as the only child of Irish immigrants, and John’s meteoric rise to the top.

Artist John McEnroe, a guru of goo - with attitude - at MCA Denver (08/2013): John McEnroe has a message for any critic trying to make sense of his exhibit at the Museum of Contemporary Art, and it translates into something like this: Buzz off.

No Foul Here! John McEnroe & Patty Smyth Splash Out $3.45 Million For Malibu Hom (07/2013): Tennis ace John McEnroe might be remembered for his legendary on-court temper tantrums , but his Malibu home with wife Patty Smyth is nothing to whine about. The celebrity couple … READ ON

Wimbledon 2013: John McEnroe tells Andy Murray it will be 'an absolute catastrop (06/2013): Andy Murray goes into his third-round match at Wimbledon on Friday with John McEnroe heaping expectation upon him after Wednesday’s carnage left his path to the final wide open.

John McEnroe would like you to get excited (04/2013): John McEnroe feels the crowd at Madison Square Garden can step up its game and be a little louder. Knicks fans, you've just been called out by a guy who knows a thing or two about yelling. "You think you're loud enough? You cannot be serious!" I bet is what he said.

John McEnroe to return to Edinburgh (03/2013): YOU cannot be serious! Yes we are – tennis legend John McEnroe is to play on a Scottish court for the first time in 24 years after it was confirmed he would take part in the ATP Champions of Tennis tournament at Edinburgh Academicals home ground.

Greg Stoda: A ‘mellow’ John McEnroe at Delray? Seriously? (02/2013): John McEnroe can do quiet.He always could, in fact, even when he was a bombastic tennis superstar known for on-court outbursts and tantrums.

John McEnroe, Jimmy Connors dust-up in 1982 (01/2013): Memory Lane is a recurring feature in which we dig through photo and video archives for classic moments.

John McEnroe proves he is still the oldest swinger in town and finds perfect sta (12/2012): McEnroe's starring role at the Albert Hall highlights how few sports allow their stars to grow old gracefully

John McEnroe, former tennis bad boy, now the crowd favorite (11/2012): The former bad boy of tennis is now its sage man of reason. Had someone suggested this possibility 30 years ago, John McEnroe himself might have laughed it off with his trademark phrase "You cannot be serious."

US Open 2012: Roger Federer goes past John McEnroe's No 1 record (08/2012): It's been an incredible season for Roger Federer. He was going into Monday night’s first round against American Donald Young with yet another new record to his name.

John McEnroe is a Hockey Guy? (05/2012): John McEnroe is know for being many things...artist, guitarist, social activitivist, father, voice of reason for tennis...but a hockey fan? Turns out Johnny Mac loves the Rangers and is buddies with Goalie Henrik Lundqvist.

The art of being John McEnroe (01/2012): ADMIRED all over the world for his artistry as a champion tennis player, John McEnroe's artistic sensibilities also extend off the court.

Tennis Fights: Serena Williams, John McEnroe, Jimmy Connors Involved In Tennis T (10/2011): Forget breaking a racket—that isn't too bad. These guys and girls are getting nasty. Giving out abuse and getting physical with officials, fellow players and even getting nasty with the crowd, these really are the 13 moments where tennis players turned nasty on the court.

Wimbledon 2011: Andy Murray must get under Rafael Nadal's skin in semi-final, in (06/2011): John McEnroe says umpire needs to monitor Rafa Nadal and that Andy Murray must try to disrupt Spaniard's routine.