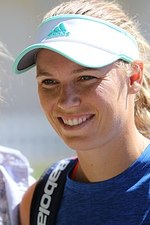 Caroline Wozniacki R (Danish: ; born 11 July 1990) is a Danish former professional tennis player. She was ranked world No. 1 in singles for a total of 71 weeks, including at the end of 2010 and 2011. She achieved the top ranking for the first time on 11 October 2010, becoming the 20th player in the Open Era and the first woman from a Scandinavian country to hold the top position. She has won more than $35 million in prize money. More about Caroline Wozniacki

Current items with a signature of Caroline Wozniacki

These are the most current items with a signature of Caroline Wozniacki that were listed on eBay and on other online stores - click here for more items.

Traded items with a signature of Caroline Wozniacki

Most recently, these items with a signature of Caroline Wozniacki were sold on eBay - click here for more items.

Caroline Wozniacki, a Former Top-Ranked Tennis Player, to Retire (12/06/19): Though she had reached No. 1 as recently as 2018, her desire to start a family was among the reasons she cited in stepping away after the Australian Open next month.

Caroline Wozniacki, 29, says she will retire following 2020 Australian Open (12/06/19): The former top player in the world is calling it quits

Caroline Wozniacki: ‘I didn’t know how strong I was’ until breakup with Rory McI (03/25/15): The Danish tennis star offered extensive comments on her heartbreak and subsequent bounce-back.

Caroline Wozniacki: ‘I didn’t know how strong I was’ until breakup with Rory McI (03/2015): The Danish tennis star offered extensive comments on her heartbreak and subsequent bounce-back.

Tennis: Caroline Wozniacki taking career to new level (12/2014): Caroline Wozniacki is behind schedule.The world No8 - one of the most famous sportswomen on the planet - is in the middle of off-season training but jokes that her Christmas plans are in some disarray.Less than a week out from...

Caroline Wozniacki Beats Her Goal (11/2014): NEW YORK - Caroline Wozniacki was thrilled with her first marathon. The tennis star ran the 26.2 mile course in just under 3 hours, 27 minutes -- a few minutes ahead of her desired time. She originally had hoped to come in under 4 hours and quickly adjusted her goal to 3:30 during the race.

Tennis star Caroline Wozniacki to run New York City Marathon (07/2014): Former No. 1-ranked tennis star Caroline Wozniacki plans to play a full tournament schedule this fall while fitting in time to train for the New York City Marathon. She said Thursday that she long had wanted to do a marathon and decided before Wimbledon that she could pull it off this year.

Kaia Kanepi advances in Stuttgart as former No. 1 Caroline Wozniacki pulls out (04/2014): Kaia Kanepi of Estonia defeated lucky loser Johanna Konta of Britain 7-6 (4), 6-4 to book her place in the second round of the Porsche Grand Prix on Monday.

Petra Kvitova, Caroline Wozniacki among players with slow starts to 2014 (02/2014): We’re six weeks into the season, providing a good vantage point to analyze which players have started slow this year. Petra Kvitova : The surprising part about Kvitova’s slow start to the season was the fact that she ended 2013 on a strong note.

Caroline Wozniacki, more fashion misses from 2013 tennis season (11/2013): The Beyond The Baseline awards are our look back at the best — and worst — of the tennis season. Today we highlight some of the worst fashion statements on the court. Click here for our complete archive of year-end awards.

Caroline Wozniacki loses to 136th-ranked Camila Giorgi at U.S. Open (08/2013): : This was a classic contrast of red-line basher (Giorgi) vs. impenetrable retriever (Wozniacki).

NBC's Top Golf Analyst Blames Caroline Wozniacki For Rory McIlroy's Slump (07/2013): McIlroy has been dating tennis player Caroline Wozniacki for two years. "I think he's in love for the first time. It's a wonderful thing, and it's distracting."

Caroline Wozniacki loses in first round in Stuttgart (04/2013): Jelena Jankovic beat Samantha Stosur 6-4, 6-4 to advance to the second round of the Porsche Grand Prix on Wednesday.

Daily Bagel: Andrea Petkovic injury; Caroline Wozniacki loses (12/2012): The Daily Bagel is your dose of the interesting reporting, writing and quipping from around the Internet.

The Toss: Caroline Wozniacki and trends of recent WTA No. 1s (09/2012): Last week on The Toss, we handicapped the ATP Player of the Year race . The topic caused a heap of debate in the comments section, but the poll showed a clear favorite in Roger Federer.

U.S. Open: Milos Raonic, Venus Williams, Caroline Wozniacki and the march of tim (08/2012): Nothing stays the same for very long in professional tennis, even when you factor in the dominance of the Big Four on the men's side.