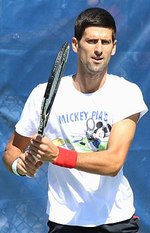 Novak Djokovic (Serbian Cyrillic: Новак Ђоковић, romanized: Novak Đoković, pronounced  (listen); born 22 May 1987) is a Serbian professional tennis player. He is currently ranked as world No. 1 by the Association of Tennis Professionals (ATP). Djokovic has been No. 1 for a record total of 355 weeks, and has finished as ATP Year-End No. 1 on a record seven occasions. He has won a joint record 20 Grand Slam men's singles titles, including a record nine Australian Open titles. Overall, he has won 86 ATP singles titles, including a record 37 Masters events. Djokovic is the only man in the Open Era to achieve a double career Grand Slam and complete a non-calendar year Grand Slam. He is also the only player to complete the career Golden Masters on the ATP Tour, which he has done twice. More about Novak Djokovic

Current items with a signature of Novak Djokovic

These are the most current items with a signature of Novak Djokovic that were listed on eBay and on other online stores - click here for more items.

Traded items with a signature of Novak Djokovic

The most expensive item with a signature of Novak Djokovic (Novak Djokovic BGS 9 2007 Ace Authentic Singles Auto Autograph #SI16 Pop 1 of 1!) was sold in August 2021 for $6600.00 while the cheapest item (NOVAK DJOKOVIC HAND SIGNED CARD, TENNIS LEGEND AUTOGRAPH ATP FINALS LONDON O2) found a new owner for $1.30 in December 2019. The month with the most items sold (27) was September 2021 with an average selling price of $75.60 for an autographed item of Novak Djokovic. Sold items reached their highest average selling price in April 2022 with $3050.00 and the month that saw the lowest prices with $8.74 was November 2019. In average, an autographed item from Novak Djokovic is worth $36.00.

Most recently, these items with a signature of Novak Djokovic were sold on eBay - click here for more items.

What the Italian Open Is Foretelling About the French Open (05/15/22): Though at opposite poles of their careers, the top singles players, Iga Swiatek and Novak Djokovic, both cruised to titles in Rome and are looking strong heading into Paris.

Carlos Alcaraz upsets No. 4 Rafael Nadal, No. 1 Novak Djokovic to reach Madrid O (05/08/22): Alcaraz, a Spaniard who turned 19 on Thursday, will be the youngest player to ever compete in a Madrid Open final

Novak Djokovic is against Wimbledon's 'crazy' ban on Russian, Belarusian athlete (04/21/22): The Wimbledon ban means men's No. 2 Daniil Medvedev of Russia and women's No. 4 Aryna Sabalenka of Belarus will not be able to compete in the event

Novak Djokovic loses first match in return to tour, upset by 22-year-old Alejand (04/12/22): It was Djokovic's first match since February

Can Nadal Extend His Grand Slam Record at the French Open? (01/2022): Nadal could strike quickly for Grand Slam singles title No. 22, particularly if Novak Djokovic, the only man to beat him twice in Paris, is unable to play because he remains unvaccinated.

Novak Djokovic withdraws from ATP Cup, heightening doubts of his Australian Open (12/2021): The world No. 1 has refused to say whether he's vaccinated against COVID-19, and the Australian Open has a vaccination mandate

US Open 2021: Novak Djokovic defeats Jenson Brooksby despite early lack of suppo (09/2021): Djokovic beat Brooksby, who the crowd seemed to be pulling for

LOOK: Novak Djokovic hands young fan winning racket from the French Open, making (06/2021): The youngster was more than thrilled with his unique keepsake from the match

Novak Djokovic loses first match of 2021: 'I just felt awful on the court' (04/2021): The Australian Open champ dropped a two-setter at the Monte Carlo Masters

Australian Open 2021: Novak Djokovic's list of demands regarding COVID-19 protoc (01/2021): Victoria premier Daniel Andrews responded to Djokovic, saying that, 'The virus doesn't treat you specially. So neither do we'

Automated Line Judging Changed the U.S. Open, Except for Novak Djokovic (09/2020): A new system meant no line judges on all but two courts, including the one where Novak Djokovic was playing when he hit a judge with a ball.

Amid Tennis’s Swirling Storms, a Stubborn Djokovic Claims a Title (08/2020): “It has been challenging mentally and emotionally for me to stay sane,” said Novak Djokovic, who beat Milos Raonic on Saturday while working to create a controversial new players’ association.

Novak Djokovic may play in US Open if officials waive quarantine period (07/2020): Djokovic tested positive for the coronavirus during the Adria Tour last month

Novak Djokovic Tests Positive for the Coronavirus (06/2020): The world No. 1 in men’s tennis is the fourth player found to be infected after he organized an exhibition series in Croatia and Serbia.

Novak Djokovic Expresses Resistance to Coronavirus Vaccine (04/2020): Though Djokovic, in an online chat, expressed concerns about having to accept a vaccination in order to travel for the tennis tour, he said in a follow-up statement that he would keep an open mind.

2020 Australian Open results: Novak Djokovic and Sofia Kenin win titles at the f (02/2020): Here's everything you need to know about the Australian Open tennis championships

Australian Open 2020: What to Expect (01/2020): The reigning champions, Naomi Osaka and Novak Djokovic, have been playing well, but there is a lot of potential for drama.

2019 US Open: Novak Djokovic booed by crowd after retiring in middle of match du (09/2019): Fans at Arthur Ashe Stadium did not seem to be understanding of the situation

Novak Djokovic insists no decision made on ATP chief Kermode amid revolt rumours (01/2019): Chris Kermode's tenure as ATP chief is reportedly under threat, but Novak Djokovic says the player council is yet to declare a position.

'Big Four' still Grand Slam stars to beat, insists Djokovic (12/2018): World number one Novak Djokovic said Monday that tennis' big four -- himself, Roger Federer, Rafael Nadal and Andy Murray -- were still the favourites to win Grand Slam titles in 2019. Despite a combination of age, injury and long-held prediction of a new generation of stars about to burst through

Novak Djokovic is best player in world and top-ranked friend, too (03/2015): Because world No. 1 Novak Djokovic usually reaches the final weekend in every tournament he enters, he rarely plays doubles.

The remarkable rise of Novak Djokovic (01/2015): From war-torn Serbia to world No.1, Novak Djokovic continues his inspirational journey in a fifth grand slam final showdown with Andy Murray on Sunday night.

Novak Djokovic continues dominance in ‘ATP’ ranking (11/2014): Serbian tennis star Novak Djokovic has continued his domination on an unchanged top 10 in the latest world tennis rankings released by the Association of Tennis Professionals (ATP). Novak Djokovic clinched the year end No.1 ranking for the third time in his career.

Novak Djokovic ties the knot with finacee in lavish Montenegro wedding (07/2014): Tennis star Novak Djokovic tied know with his longtime girlfriend Jelena Ristic in a posh outdoor religious ceremony which was held near to the Montenegro islet Sveti Stefan recently.

Novak Djokovic wins after injury scare at Wimbledon (06/2014): London, June 28 : Top seed Novak Djokovic moved into the fourth round of the men's singles with a comfortable 6-4, 6-2, 6-4 defeat of Frenchman Gilles Simon here at the Wimbledon Friday.

Novak Djokovic, longtime girlfriend expecting baby (04/2014): Novak Djokovic is going to need to get into the swing of being a father.

Daily Bagel: Novak Djokovic searching for that ‘mental edge’ with Boris Becker (12/2013): The Daily Bagel is your dose of the interesting reporting, writing and quipping from around the Internet. • Video: Eugenie Bouchard aced Bernard Tomic at Hopman Cup.

Lleyton Hewitt wins; Novak Djokovic breezes in windy US Open (08/2013): NEW YORK — Lleyton Hewitt displayed the same shots and grit that earned him a US Open trophy and the No. 1 ranking a dozen years ago.

WIMBLEDON LIVE: Novak Djokovic, Laura Robson and Serena Williams line up on day (06/2013): The highlight of the British sporting summer - The Championships at Wimbledon - continues into day six and you won't miss any of the SW19 action with Sportsmail's rolling live coverage.

Serena Williams survives, Novak Djokovic falls: Images from the Sony Open (03/2013): Check out some of the sights from the week in Key Biscayne.

Novak Djokovic wears Darth Vadar for Halloween clash in Paris (10/2012): Novak Djokovic's Halloween joke backfired as he crashed out in the second round of the BNP Paribas Masters in Paris to American Sam Querrey.

US Open 2012: Novak Djokovic rolls on to third round (08/2012): NEW YORK — Aside from one long, long game, Novak Djokovic kept things quick on a 90-degree afternoon at the U.S. Open on Friday. The defending champion at Flushing Meadows dropped a 24-point, 15-minute game early in the second set, a tiny blip along the way to wrapping up another ...

No hangover from Wimbledon woe, says Novak Djokovic (07/2012): Novak Djokovic has warned Roger Federer there is no chance he will suffer an Olympic hangover despite losing his Wimbledon title and world number one ranking to the Swiss great.