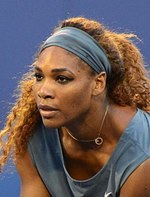 Serena Jameka Williams (born September 26, 1981) is an American professional tennis player. She has been ranked singles world No. 1 by the Women's Tennis Association (WTA) for 319 weeks, including a joint-record 186 consecutive weeks, and finished as the year-end No. 1 five times. She has won 23 Grand Slam singles titles, the most by any player in the Open Era, and the second-most of all time (behind Margaret Court's 24). More about Serena Williams

Current items with a signature of Serena Williams

These are the most current items with a signature of Serena Williams that were listed on eBay and on other online stores - click here for more items.

Traded items with a signature of Serena Williams

The most expensive item with a signature of Serena Williams (RARE 2003 NetPro SERENA WILLIAMS Rookie, Autograph/Auto-Game Worn Serial #'d/100) was sold in January 2022 for $39999.90 while the cheapest item (Serena Williams Tennis Wristbands Signed Authentic Autographed) found a new owner for $0.99 in October 2019. The month with the most items sold (20) was September 2022 with an average selling price of $262.49 for an autographed item of Serena Williams. Sold items reached their highest average selling price in December 2022 with $3777.00 and the month that saw the lowest prices with $4.99 was September 2012. In average, an autographed item from Serena Williams is worth $75.00.

Most recently, these items with a signature of Serena Williams were sold on eBay - click here for more items.

A Surprising WTA Finals Victory Mirrors the Year in Women’s Tennis (11/08/22): Caroline Garcia, ranked just 79th in May, won the season-ending championship and will finish at No. 4 in a year that saw Serena Williams and Ashleigh Barty retire.

Serena Williams reveals she's 'not retired,' says chances of a return are 'very (10/24/22): Williams announced she was stepping away from the sport in August prior to the 2022 US Open

Roger Federer, Serena Williams retiring within weeks of each other marks end of (09/15/22): A lad from Basel and a queen from Compton helped grow the game in ways that make it impossible to envision the sport without them

LOOK: Serena Williams jokes about following the Tom Brady trend and unretiring (09/14/22): The 23-time Grand Slam champion is evolving away from tennis, but seemed to leave the door cracked for a return

The Void Serena Williams Left in Tennis Doesn’t Need to Be Filled (09/06/22): Tennis has long thrived on singular stars, no one bigger than Serena Williams. But perhaps women’s tennis doesn’t need one big name to be interesting.

Tennis legend Margaret Court says Serena Williams, media have 'never admired' he (09/2022): Court even took a shot at Williams for not winning a Grand Slam title since giving birth to her daughter Olympia

Wimbledon 2022 results: Schedule, scores, draws, how to watch, TV channel as Ser (06/2022): Everything you need to know about the action at the All England Club

Serena Williams hints at Wimbledon return this June following lengthy absence fr (04/2022): Williams hasn't played since last year's Wimbledon, where she suffered an ankle injury that forced her to withdraw from the tournament

Australian Open 2022: Serena Williams will not play in tournament due to injury (12/2021): Williams hasn't been on the court since suffering a hamstring injury at Wimbledon over the summer

US Open 2021: Serena Williams' coach Patrick Mouratoglou explains why injury for (08/2021): In essence, it was a race against the clock for Serena Williams

Wimbledon 2021: Serena Williams forced to withdraw in first round due to ankle i (06/2021): Williams suffered the injury during the sixth game of the opening set

Serena Williams withdraws from French Open with Achilles injury, says she is 'st (09/2020): Williams first suffered the injury at the US Open

Youth and Experience Will Face Off in the U.S. Open Women’s Draw (08/2020): The No. 1 and No. 2 players are absent, but Serena Williams continues her quest for a record title, while Sofia Kenin and Naomi Osaka are at her heels.

LOOK: Serena Williams shares adorable photos playing tennis with daughter (07/2020): They even had matching fits to go with it

As Other Stars Waver, Serena Williams Says She’ll Play in the U.S. Open (06/2020): The men’s and women’s tennis tours are set to resume in August, as both circuits announced their plans on Wednesday.

Serena Williams, Maria Sharapova among players to participate in charity video g (04/2020): The winnings from the tournament will be given to charity

Coronavirus: Serena Williams opens up about the anxiety and stress of social dis (03/2020): The tennis star was candid in a recent TikTok

No Australian Has Won an Australian Open Singles Title Since the ’70s. Can Barty (01/2020): Ashleigh Barty is two wins away from winning a Grand Slam title in her home country, as the top-ranked player left in a draw without Serena Williams, Naomi Osaka and other big names.

For Sale: Serena Williams’s Broken Racket. Yes, That One. (11/2019): The racket Williams broke in her chaotic United States Open final against Naomi Osaka in 2018 has become an unusual piece of sports memorabilia.

Serena Williams Lost, but Her Legacy Is Winning (09/2019): She was plowing through the U.S. Open toward what seemed like a fitting victory. But the future she helped create caught up to her.

Nadal through but Serena Williams made to wait in Florida (03/2015): Rafael Nadal eased into the third round of the Miami Open on a day when rain curtailed proceedings in Florida

Serena Williams hits back at Russian official (10/2014): FILE - In this April 16, 2013 file photo, Russia's team captain Shamil Tarpischev speaks during a news conference prior to the Fed Cup match between Russia and Slovakia in Moscow, Russia.

Serena Williams in a hurry at U.S. Open (08/2014): For the serious contenders at grand slams, it's all about trying to advance with minimal fuss in the first week.

Serena Williams, Caroline Wozniacki celebrate with Miami Heat (05/2014): Bounced in the first round of the French Open, tennis players head for South Beach.

Serena Williams beats Li Na for Sony Open title (03/2014): KEY BISCAYNE, Fla. (AP) — The celebration began with a series of happy hops that propelled Serena Williams across the court. Soon she was twirling, waving, laughing and mugging for the cameras — a familiar ritual by a perennial champion.

Serena Williams still way ahead of her tennis rivals (01/2014): At 32 years, Serena Williams has more than maintained her career standing over the past two years.

Daily Bagel: Serena Williams, Victoria Azarenka hit the runway in Thailand (12/2013): The Daily Bagel is your dose of the interesting reporting, writing and quipping from around the Internet. • According to this Swiss interview (link in German), Roger Federer confirms he will be playing with a larger racket frame in Australia.

Serena Williams sets career high in matches played in 2013 (10/2013): • Serena Williams played a tour-high 82 matches this year, a whopping 20 more than her previous career high of 62. Winning so often certainly helped pad that total; the 32-year-old Williams finished 78-4 with 11 titles.

Serena Williams smashes racket after double fault on match point in doubles loss (09/2013): Its sad we have to result in name calling. What about the Caucasian men and women this year that smashed their racket out of frustration? What about Svelvana who threw her racket when she loss in Tokyo? Do they get name called?

Serena Williams leads WTA tributes (06/2013): It was the ultimate gathering of tennis talent.

Serena Williams would have loved to take lessons from PBS painter Bob Ross (05/2013): Serena Williams extended her win streak to 27 straight matches on Friday, defeating No. 26 Sorana Cirstea 6-0, 6-2 in the third round of the French Open. Her current run, which dates to March, is the longest of the 31-year-old’s career. Williams doesn’t pay much attention to it, though.

Serena Williams returns to Charleston (01/2013): The Williams sisters are back at the Family Circle Cup.

Serena Williams WTA Player of the Year (11/2012): Let us be clear about things. Those people claiming tha...

Serena Williams leads bevy of American players in action on Day 6 of U.S. Open (08/2012): In a tournament that has been as much about saying goodbye to familiar faces as it has been about saying hello to some fresh ones, it’s the Americans, both young and old, who are looking to take the stage and break some brackets.

"Serena Williams, If You Want To Cut That Wimbledon Check For Your Boy, You'll G (07/2012): Months after famed tennis player Serena Williams' untitled rap record leaked online, producer Chase N. Cashe, who initially poked fun at the record, tells SOHH he could have a hit for the sports star. [Visit SOHH.com for more information]

Coaching Against Serena Williams? It's Not Easy (06/2012): A coach describes what it is like for one of his players to face Serena Williams. It's about as difficult as you would think.

Serena Williams adopts 'healthy diet' of Venus as show of solidarity for ailing (04/2012): New York, Apr 29 : Tennis ace Serena Williams has changed her diet and adopted the eating habits of sister Venus, who is trying to cope with Sjogren's syndrome.

Serena Williams into 4th round at Australian Open (01/2012): Andy Roddick of the US slips over against Australia's Lleyton Hewitt during their second round match at the Australian Open tennis championship, in Melbourne, Australia, Thursday, Jan. 19, 2012.

Serena Williams captures first title since return to tennis (07/2011): Serena Williams has captured her first tournament title in her tennis comeback, beating Marion Bartoli 7-5, 6-1 to win the Bank of the West Classic on Sunda

Jon Wertheim: Why Serena Williams will win Wimbledon and more reader mail (06/2011): We'll be back Friday with our seed report ...

The Search For Serena Williams (05/2011): This is perhaps the most boring Grand Slam tournament ever. At least sartorially speaking. In the pa

Venus Williams, Serena Williams mum on return (04/2011): Serena Williams sprinted along the baseline to smack a cross-court backhand winner, then pumped a fist -- a familiar pose. And then she smiled. She didn't dare glare in the direction of her teenage opponents Thursday, students at the Southeast Tennis and

Serena Williams Launching New Nail Shades (03/2011): After the successful launch of her first nail collection earlier this year, the tennis superstar is back for round two.

Serena Williams NOT Engaged to Common (01/2011): A representative for Serena Williams says Common hasn't proposed yet, insisting the engagement rumor is 'not true at all.'

Serena Williams, Not a California Taxpayer, Inducted Into Hall of Fame (12/2010): Should we honor Californians who live elsewhere, in part to avoid paying taxes?