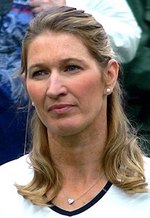 Stefanie Maria "Steffi" Graf (/ɡrɑːf, ɡræf/ GRA(H)F, German: (listen); born 14 June 1969) is a German former professional tennis player. She was ranked world No. 1 for a record 377 weeks and won 22 major singles titles, the second-most since the start of the Open Era in 1968 and third-most of all-time (behind Margaret Court's 24 and Serena Williams' 23). In 1988, Graf became the first tennis player to achieve the Golden Slam by winning all four major singles titles and the Olympic gold medal in the same calendar year. Furthermore, she is the only tennis player, male or female, to have won each major tournament at least four times. More about Steffi Graf

Current items with a signature of Steffi Graf

These are the most current items with a signature of Steffi Graf that were listed on eBay and on other online stores - click here for more items.

Traded items with a signature of Steffi Graf

The most expensive item with a signature of Steffi Graf (Steffi Graf WORN and signed Tennis top - ADIDAS equip) was sold in July 2008 for $999.00 while the cheapest item (STEFFI GRAF TENNIS PLAYER SIGNED PHOTO 6 X 4) found a new owner for $0.95 in April 2015. The month with the most items sold (7) was September 2009 with an average selling price of $19.53 for an autographed item of Steffi Graf. Sold items reached their highest average selling price in May 2015 with $149.99 and the month that saw the lowest prices with $0.95 was April 2015. In average, an autographed item from Steffi Graf is worth $16.14.

Most recently, these items with a signature of Steffi Graf were sold on eBay - click here for more items.

Agassi says would be 'beautiful' if Serena breaks wife Steffi Graf's 22 Grand Sl (03/15/15): American tennis legend Andre Agassi believes that it would be a beautiful thing to witness if current number one Serena Williams went on to break his wife Steffi Graff's record of 22 Grand Slam titles.

Steffi Graf shows off Halloween costume (10/29/14): With the whole of the United States gearing up for Halloween, one prominent sports-star doesn't want to miss out on all the fun.

Goran Ivanisevic: If I'd been Andy Murray, I'd have gone for Steffi Graf as my c (06/2014): Andy Murray had a confident start to the defence of his Wimbledon title with a straight-sets win over David Goffin on Centre Court after receiving a wonderful reception from the fans on his return as the champion.

Hall of Fame... Steffi Graf: Queen of the court and the greatest ever sportswoma (02/2014): MIKE DICKSON: Steffi Graf overcame personal upheavals and associated tragedy to become arguably tennis’s greatest ever player and, by extension, possibly the most complete female athlete of all time.

Daily Bagel: Steffi Graf says if Serena Williams stays healthy, she will break r (09/2013): The Daily Bagel is your dose of the interesting reporting, writing and quipping from around the Internet.