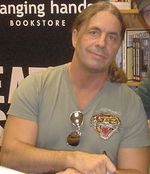 Bret Sergeant Hart (born July 2, 1957) is a Canadian-American retired professional wrestler, currently signed to WWE under a legend's contract. A member of the Hart wrestling family and a second-generation wrestler, he has an amateur wrestling background, wrestling at Ernest Manning High School and Mount Royal College. A major international draw within professional wrestling, he has been credited with changing the perception of mainstream North-American professional wrestling in the early 1990s by bringing technical in-ring performance to the fore. Hart is widely regarded as one of the greatest professional wrestlers of all time; Sky Sports noted that his legacy is that of "one of, if not the greatest, to have ever graced the squared circle". He was a face of the World Wrestling Federation (WWF) during the New Generation Era and the early Attitude Era. For the majority of his career, Hart used the nickname "Hitman". More about Bret Hart

Current items with a signature of Bret Hart

These are the most current items with a signature of Bret Hart that were listed on eBay and on other online stores - click here for more items.

Traded items with a signature of Bret Hart

Most recently, these items with a signature of Bret Hart were sold on eBay - click here for more items.

Wearing her 'Hart' on her sleeve: How WWE’s Natalya carries on a family legacy (12/13/18): Everything Natalie Neidhart does in WWE pays homage to her family, which makes this current storyline emotionally taxing for her but captivating for fans.

Real Reason Why Owen Hart Didn't Join WCW After The Montreal Screwjob (12/08/18): Why didn't Owen Hart follow his brother Bret to the other company?

Bret Hart talks Macho Man – HOF, Daniel Bryan, Roman Reigns, more (03/17/15): Bret Hart is a fan of both Bryan & Reigns On this week’s edition of the LAW : Live Audio Wrestling, the guest was Bret Hart, who was the ...

Bret Hart: 'I tip my hat to the young wrestlers of today' (02/26/15): Bret Hart probably would have been a loose-ball fiend on the lacrosse floor. You can easily imagine him deftly sneaking into a scrum and sneaking out with ball, his long locks flowing out the back of his helmet as he raced down the floor with a smirk across his face.

Bret Hart Attends Lacrosse Game, HBK Signing Note, Atlas News & More News Inside (02/14/15): Like this post? Share it! -- There is a fundraising campaign on Indiegogo for a February 22 Tony Atlas Experience event, filming discussions with Atlas about the history of pro wrestling. So far there have been no donations.

Apply For A Job With WWE As An Intern, Bret Hart Speaks Out, WWE Posts A NXT Cli (02/2015): Like this post? Share it! -- WWE has a job opening for a credit intern in Human Resources. You can find out more here .

Bret Hart Reveals His Current Relationship With Vince McMahon & His Favorite Wre (01/2015): Like this post? Share it! On his favorite recent wrestlers: “I’m a big fan of Wade Barrett, Sheamus and I can’t believe they let Drew McIntyre go, he was a much better wrestler than they used him as. I think he was one of the best wrestlers they had.

Bret Hart knocked Vince McMahon out after infamous ‘Montreal Screwjob’ (11/2014): Arguably the most famous match in professional wrestling history was the 1997 title bout between Bret “Hitman” Hart and Shawn Michaels commonly known as the “Montreal screwjob.” Hart was leaving...

Photo: Bret Hart With Earl Hebner At Recent Wrestling Event (10/2014): Like this post? Share it! Want to write for eWrestlingNews.com? Connect now and find out how to contribute.

Ken Shamrock On Nearly Becoming WWE Champ, The Rock, Bret Hart, UFC & More (09/2014): Like this post? Share it! Ken Shamrock shared some cool stories during a recent interview, including how he was once set to become WWE Champion until The Rock and politics screwed it up for him.

Bret Hart's Calgary Hitmen Hockey Team Celebrates Their 20th Anniversary - Detai (07/2014): Icethetics reports that in honor of their twentieth anniversary as a team, the Western Hockey League's Calgary Hitmen will be busting out some some retro uniforms and jersey patches.

Bret Hart & Wife Backstage At Last Nght's WWE Event (06/2014): WWE Hall Of Famer Bret Hart and his wife were backstage at the WWE live event in Calgary, Alberta, Canada on Friday night. They were just there visiting friends and hanging out at the show.

Bret Hart Remembers His Brother Owen Hart (05/2014): Hey Owen, can't believe it's been fifteen years since you left us. It still hurts the same and not a day goes by that I don't think of you And smile. There are so many things I wish I could tell you but, most of all, I'd just tell you how much I miss you Brother.

LaBar: A match against Bret Hart and British Bulldog Jr. (04/2014): I walked in the building, up the steps from the back door and could see a ring and 2,000 empty seats surrounding it. All I ...

Styles-Bret Hart Connection (01/2014): Styles, like Bret Hart wants more of an opportunity; and both men wanted to have more from their respective companies. Bret is not able to stay, due to financial woes in WWF, and now fast forwarding years later, TNA has assumed a similar problem. However, does Styles jump to a big rival?

Bret Hart Talks About WrestleMania, His Greatest Rival, the Montreal Screwjob an (12/2013): The new game features a ‘30 years of WrestleMania’ mode. What are your greatest memories of the ones in which you fought? WrestleMania was a very special event for me, a bit like an American footballer playing in the Superbowl.

Bret Hart Q&A Highlights: Secret Talents, Thoughts on The Rock, Ending His Caree (11/2013): Bret “The Hitman” Hart participated in a Q&A on his Twitter account today. Here are a few questions he answered. Bret Hart would you ever consider doing some freelance “road agenting” for the WWE?

Bret Hart Talks About Appreciation Night, If He Misses the Business & More (07/2013): Bret “The Hitman” Hart called into 680 All News Radio out of Toronto, Canada last week. Here are some highlights. Bret Hart Appreciation Night: “That was really special.

Bret Hart’s Daughter Trying to Get Into Wrestling (06/2013): Beans Hart, the daughter of WWE Hall of Famer Bret Hart, is looking to step foot into the professional wrestling business.

WWE Stages Bret Hart Appreciation Night (05/2013): Bret Hart has been honoured with his own appreciation day following WWE's Monday Night Raw this week.The veteran wrestler was the guest of honour at the event - which was broadcast live from...

My Two Centsss - In Bret Hart's Words, That RAW Was A 4/10 (04/2013): Another week, another unimpressive Monday Night RAW. Don't get me wrong; I'm not going to spend the next 1000 words or so complaining about how shitty the show was. Because there were some positives, and most of those highlights came from what people tune into RAW to see - actual wrestling matches.

Sheamus on Bret Hart Influencing Him, WrestleMania, Wanting Match With Undertake (03/2013): Sheamus was interviewed by DirecTV to promote WrestleMania 29. Here are some of the highlights from the interview. On what he’s looking forward to with this year’s WrestleMania: “Everything about WrestleMania.

Bret Hart Says HHH’s Match with Undertaker Was Mediocre (01/2013): Bret Hart spoke with Wrestle Talk TV Extra. Here are some of the things he had to say about Triple H.

Their best years: Bret Hart, CM Punk, and Christian (11/2012): Hello everyone. Welcome to another "Best Years" blog. As usual, I'll be listing three wrestlers and telling you guys what their best year was along with giving reasons as to why I feel that was truly their best year in professional wrestling.

Bret Hart Talks About Punching Out Vince In 1997 & WWE Wasting Talent (09/2012): WWE Hall of Famer Bret Hart spoke with Rob McNichol of the UK Sun this week about his return to Montreal on Monday for RAW and WWE wasting great talent by focusing on making them "television stars" instead of world class pro wrestlers.

Shawn Michaels Talks On CM Punk & Daniel Bryan Being Compared To Himself & Bret (08/2012): Shawn Michaels was asked about CM Punk and Daniel Bryan being this generation's version himself and Bret Hart in an interview with Aftermath on The Score.

Bret Hart To Appear In Newfoundland On 6/7/12 (03/2012): Bret Hart will be part of the LCW show on June 7th, 2012 at the Jack Byrne Arena in Torbay, Newfoundland, Canada. Tickets go on sale March 26th, 2012. Go to http://legendcitywrestling.com for more info and http://prowrestlingevents.webs.com for info about wrestling shows worldwide.

Daughter of legendary Calgary wrestler Bret Hart tackles fashion design (01/2012): Growing up in one of wrestling’s most famous families, it was impossible for Jade Hart not to consider pursuing the sport herself.

Watch ESPN's Scott Hall Special, Waltman and Bret Hart Comment on Hall (10/2011): Sean Waltman: "E 60 piece was what I thought it would be. Fair. Never saw Fall River footage b4. Worse than I imagined. F that bottom feeding promoter."

Bret Hart Praises the Bella Twins (08/2011): In an interview with "The Cardboard Connection", WWE Hall of Famer Bret "the Hitman" Hart was asked to name who he believes are the top performers in the wrestling industry.

JR Blog: Endorsing HBK's Hunting Show, WWE Success Overseas, Bret Hart (07/2011): Jim Ross is back with a 4th of July blog over on his website, jrsbarbq.com. Here are some highlights from this entry: - Speaking of Australia, WWE Raw talents are finishing up a 5 day tour there today.

Shawn Michaels & Bret Hart To Revisit WWE Montreal Screwjob (06/2011): The WWE will be producing what could be one of the most fascinating DVDs in company history. Reports indicate that one of the most infamous wrestling stories will be revisited with the two principal parties facing off for the first time ever on WWE home video .

Bret Hart Comments On WWE Banning The Word "Wrestling" (04/2011): The UK Sun has published a new interview with WWE Hall of Famer Bret Hart, which you can read here in its entirety.

Shut the eff up Bret hart! (03/2011): Remember Me? If this is your first visit, be sure to check out the FAQ by clicking the link above. You may have to register before you can post: click the register link above to proceed. To start viewing messages, select the forum that you want to visit from the selection below.

Big RAW *Spoiler* and the Other Bret Hart Quits WWE (02/2011): who worked in the live events department issued his resignation from the company today. Many were surprised by his decision to leave and are speculating who else may follow Donna Goldsmith out of the company after WWE reveals its latest financial quarters on Thursday.

Melina Reacts To Bret Hart's Compliments, Says She Doesn't Want To Let Him Down (01/2011): The latest issue of WWE Magazine features an interview with Melina discussing her seven month hiatus last year from the squared circle, where she would rank herself on the all-time list of Divas, her high-pitched screaming, and more.