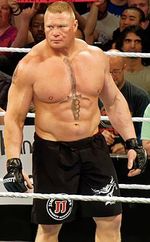 Brock Edward Lesnar (/ˈlɛznər/; born July 12, 1977) is an American-Canadian professional wrestler, former mixed martial artist, amateur wrestler, and professional football player. He is currently signed to WWE, where in storyline he is a free agent, allowing him to appear on any WWE brand, and he is also the reigning WWE Champion in his seventh reign. Regarded as one of the greatest professional wrestlers of all time, he is the only person to hold the primary heavyweight championships in WWE, Ultimate Fighting Championship (UFC), New Japan Pro-Wrestling (NJPW), and the National Collegiate Athletic Association (NCAA). Overall, he is a 12-time world heavyweight champion across major wrestling (WWE and NJPW) and MMA promotions (UFC). More about Brock Lesnar

Current items with a signature of Brock Lesnar

These are the most current items with a signature of Brock Lesnar that were listed on eBay and on other online stores - click here for more items.

Traded items with a signature of Brock Lesnar

The most expensive item with a signature of Brock Lesnar (WWE BROCK LESNAR & GOLDBERG HAND SIGNED WORLD HEAVYWEIGHT UNIVERSAL BELT W/ COA) was sold in July 2017 for $2999.99 while the cheapest item (P.W.I Magazine Brock Lesnar Signed Oct 2002) found a new owner for $0.01 in March 2008. The month with the most items sold (30) was July 2009 with an average selling price of $20.49 for an autographed item of Brock Lesnar. Sold items reached their highest average selling price in June 2021 with $499.99 and the month that saw the lowest prices with $2.24 was October 2021. In average, an autographed item from Brock Lesnar is worth $37.00.

Most recently, these items with a signature of Brock Lesnar were sold on eBay - click here for more items.

Real or not: BMF rematch needs a live crowd; Brock Lesnar returns to UFC? (09/01/20): How would Jorge Masvidal vs. Nate Diaz 2 look in an empty arena? Will Brock Lesnar fight Jon Jones? Our expert panel weighs in.

Lesnar hits free agency: Potential landing spots for the former UFC and WWE cham (09/01/20): Brock Lesnar's WWE contract has expired. Will he remain in pro wrestling or go back to mixed martial arts?

WWE Power Rankings: Did Drew McIntyre's Rumble win put him over 'The Fiend' and (02/2020): It's officially WrestleMania season. The latest set of ESPN WWE power rankings break down all of the fallout from the Royal Rumble.

Brock Lesnar marks WWE loyalty with main event at WrestleMania (03/2015): Brock Lesnar will keep his heavyweight championship defenses on the WWE Network.Up next for the wrestler known as "The Beast Incarnate," a date in the main event of WrestleMania 31.

Brock Lesnar walks out on WWE (02/2015): BROCK Lesnar could be headed back to the UFC after failing to come to terms with Vince McMahon on a new WWE contract.

Dana White On Brock Lesnar - "If He Wants To Fight, He'll Call Me" (01/2015): Like this post? Share it! Fight Network's John Pollock talks with UFC president Dana White about Brock Lesnar 's possible return to MMA. For more stories like this, check out our sister website, Efightnewscom.

Brock Lesnar Rules WWE Now, UFC Again Next? (10/2014): Brock Lesnar has defeated the Undertaker and John Cena this year. He is the current WWE World Heavyweight Champion. There are some rumor reports that Lesnar considers to go back to UFC. Now UFC boss...

Videos - Brock Lesnar & Sable Spotted In An Airport Prior To RAW + CM Punk At Co (07/2014): Saori meeting Brock Lesner at Orlando Airport .... #brocklesner #wwe #orlandoairport #thepain #th... Want to write for eWrestlingNews.com? Connect now and find out how to contribute.

Jim Ross Blogs On TNA Improving & Brock Lesnar Returning At Summerslam (06/2014): On Impact improving: T NA Impact was a much better TV show this past Thursday night on Spike but many of the in ring talking segments could have been just as successful and impactful if they had been shorter.

Backstage News - Brock Lesnar's WWE Return? (05/2014): It's been expected that Brock Lesnar will return for this year's SummerSlam . It was recently reported that he is also being considered for Night of Champions. The plan is for him to have a two-show feud, fighting the same person at both PPVs.

Daniel Bryan vs. Brock Lesnar At SummerSlam Is A Horrible Idea (04/2014): That's a horrible idea. What can be gained from such a match? As I see it, there's way more negatives than positives if they pull the trigger on booking that particular program.

WrestleMania 30 Betting Odds: John Cena, Triple H And Brock Lesnar Expected To L (03/2014): The outcome of all WWE matches are predetermined, but that doesn’t mean fans aren’t able to wager on the results. WrestleMania 30 is one of the biggest events in sports or entertainment of 2014, and early betting odds have been set for the pay-per-view.

Brock Lesnar Fined for Attack on Referee (01/2014): WWE reported that Brock Lesnar was fined $10,000 for his attack on a WWE referee at the Royal Rumble pay-per-view event. Here is an excerpt from their report:

Brock Lesnar Returns To WWE After 4 Months (12/2013): Last week, rumors began circulating that Brock Lesnar would be returning to the UFC. However, the rumors were obviously false, seeing as how Brock has since returned to the WWE. The rumors were simply a publicity stunt to generate buzz …

Former UFC champ Brock Lesnar says he wants to move to Saskatchewan (10/2013): Current pro wrestler would like to get dual citizenship and live in province full time

WWE Summerslam 2013 results: Brock Lesnar defeats CM Punk in a no disqualificati (08/2013): Punk and Lesnar wasted little time going after each other. Punk ran at Lesnar only for Lesnar to pick him and slam him into the corner.

Why Bobby Lashley's WWE-to-MMA path didn't follow Brock Lesnar's (06/2013): You might not have known this, but Bobby Lashley is fighting this weekend. He fought earlier this month, too, though you could be forgiven for not knowing that, either.

Paul Heyman Talks About Brock Lesnar vs. Triple H, CM Punk vs. The Undertaker an (03/2013): Working with CM Punk and Brock Lesnar at WrestleMania: "How could it be bad for me? I have two of the three main events properly represented on the biggest Wrestlemania of all time in the New York/New Jersey metropolitan area. How could things be going anything but splendidly for me?

Brock Lesnar Reportedly Signs an Extension with the WWE (01/2013): According to Mike Johnson of the Pro Wrestling Insider , the WWE and talent Brock Lesnar have reportedly come to terms on a new 2 year extension deal.

The Shield Promo Brock Lesnar (12/2012): What do The Shield mean by the line "At TLC, bring TABLES, bring LADDERS, bring CHAIRS. The Shield brings the sword" do they mean Brock Lesnar as he has a tattoo of a sword on his chest.

Brock Lesnar Officially Advertised For WrestleMania XXIX, Tallest Wrestlers In W (10/2012): Also featured on the advertisement are Dwayne "The Rock" Johnson and John Cena. Lesnar is featured in the center of the ad, with Johnson featured on the left and Cena on the right. No other WWE Superstars are acknowledged in the ad.

Brock Lesnar "Fight" altercation - Backstage @ RAW!! (08/2012): According to pro-wrestling blog The Wrestling Observer, former UFC champion Lesnar got into fisticuffs at a backstage rehearsal for a WWE ‘SummerSlam’ event. He and another pro-wrestler were working through a routine when things went awry.

Jim Ross Blogs On Steve Austin Missing RAW, The Rock, Undertaker, Brock Lesnar (07/2012): Seeing The Rock: "Good to see The Rock as he made his rounds to say hello to everyone before preparing for what was obviously a busy and entertaining night. Rock committing to perform in the main event at the 2013 Royal Rumble obviously has Wrestlemania 29 implications or it would seem."