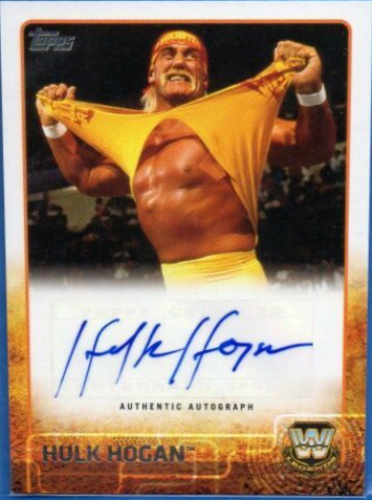 Terry Eugene Bollea (/bəˈleɪə/; born August 11, 1953), better known by his ring name Hulk Hogan, is an American retired professional wrestler. He is widely regarded as the most recognized wrestling star worldwide and the most popular wrestler of the 1980s. More about Hulk Hogan

Current items with a signature of Hulk Hogan

These are the most current items with a signature of Hulk Hogan that were listed on eBay and on other online stores - click here for more items.

Traded items with a signature of Hulk Hogan

The most expensive item with a signature of Hulk Hogan (1982 Wrestling All Stars #2 Hulk Hogan Signed Rookie Autograph RC BAS BGS 8.5/10) was sold in February 2021 for $14999.00 while the cheapest item (Hulk Hogan signed card great shape WWE WWF auto combine ship) found a new owner for $0.01 in September 2016. The month with the most items sold (62) was March 2022 with an average selling price of $162.50 for an autographed item of Hulk Hogan. Sold items reached their highest average selling price in September 2022 with $225.00 and the month that saw the lowest prices with $7.95 was February 2017. In average, an autographed item from Hulk Hogan is worth $85.00.

Most recently, these items with a signature of Hulk Hogan were sold on eBay - click here for more items.

WWE news, rumors: Hulk Hogan angling for final match, Sasha Banks injury at Hell (10/08/19): 'The Boss' may be on the shelf after suffering an injury at Hell in a Cell

Report - WWE To Renew Legends Contracts For Hulk Hogan, Ric Flair & Booker T - e (12/10/18): Source: The Wrestling Observer Newsletter According to sources, WWE is looking to renew the “Legends” contracts of Hulk Hogan, Ric Flair, and Booker T. The process normally works with WWE signing the Legends to one-year contracts that are renewed at the beginning of each year. WWE has also been look

WWE Legend Says He's Just Waiting For His Time To Come, Talks Life Being Bad, Wr (12/2018): WWE Legend Kamala recently appeared on The Dan Le Batard Show on ESPN Radio and talked about wrestling WWE Hall of Famer Hulk Hogan while intoxicated. “I was going to the Nassau Coliseum to wrestle him,” Kamala said. “I was drinking and got pretty near smashed, since I don’t usually drink a lot. Whe

Hulk Hogan's ex lists the villa she bought with her big divorce money (04/2015): Whatcha gonna do, brother? Linda Hogan is selling the sprawling estate she bought after her deluxe divorce settlement from pro wrestler Hulk Hogan. The price tag: $5.5 million.

Marc Gasol pulled a Hulk Hogan and shredded his jersey (03/2015): It got torn a little, so Marc just went the rest of the way like a man-beast: Gotta add that mangled garment to the injury report: And, of course, gotta REAL AMERICAN that moment: ( McBob and Darko say hi .) (Also Darko is judging you for wearing an undershirt and not going  full Aladdin .)

Hulk Hogan and John Cena Grant a Wish, New Fantasy Warfare, More (02/2015): – The Horror Society has announced their “Best of 2014″ awards and WWE Studios’ See No Evil 2 picked up second place for the Best Horror Film of the year while WWE’s Oculus came in fifth.

WWE Legend Hulk Hogan is training hard for a return to the ring. (01/2015): The Hall of Fame Superstar has not competed in a match for World Wrestling Entertainment for nearly 10 years but he now has his sights set on a return to competition.

Hulk Hogan Training Rapper Riff Raff for Pro Wrestling (12/2014): – Nick Hogan announced this weekend that his dad Hulk Hogan will be training rapper Riff Raff to get into a pro wrestling ring. Video of their announcement is above and below are some posts from Twitter and Instagram:

Why Is Hulk Hogan Getting Mentioned In Ferguson Shooting? (11/2014): After a controversial grand jury decision to not indict Darren Wilson in the shooting of Michael Brown, it’s been reported that Wilson’s testimony regarding the shooting has been made available to public. It is Wilson’s only detailed account of the …

Hulk Hogan and Dwayne Johnson: Don’t text and exercise (10/2014): The muscle men often work out together and abide by one strict rule: no cellphones while working out.

Video: Hernandez Talks - TNA Wrestling 2014, Hulk Hogan & Eric Bischoff (09/2014): Like this post? Share it! Title Match Wrestling just talked with former TNA star Hernandez about his last stint in the company & learning he was still employed through the TNAWrestling.com website.

Hulk Hogan Discusses His Return To WWE & Birthday Celebration On RAW, Vince McMa (08/2014): Like this post? Share it! Hulk Hogan on his recent birthday segment on RAW : “I got rattled when they played the package because I didn’t know what they were going to do. Vince [McMahon] likes to do the sneaky stuff without telling me.

Hulk Hogan Congratulates John Cena On His Title Win (06/2014): Want to write for eWrestlingNews? Connect now and find out how to contribute.

Ways to Use Hulk Hogan (05/2014): Is it just me or has Hulk Hogan 's return been disappointing? I'm glad he was able to patch things up with management and return to the promotion after a lengthy period away, but is he being misused? So far we've only seen him a couple of times.

Update: Why Hulk Hogan Is Headed To Japan (04/2014): As previously reported, Hulk Hogan is going on WWE 's tour of Japan in July. The reason for doing so is to boost ticket sales there, where their popularity has been sagging somewhat. It has apparently worked as ticket sales spiked as soon as Hogan was announced.

Hulk Hogan Says Johnny Manziel Is The Next Greatest Of All Time (03/2014): Hulk Hogan is such a big fan of Johnny Manziel that he came up with a video praising the player. Wearing a bright lime green shirt, red headgear, shades, and his iconic Hulkster ‘stache, the wrestler began his video by …

Hulk Hogan Not Fighting in WrestleMania This Year (01/2014): Last month, through his Twitter account, ex-pro wrestler Rowdy Roddy Piper, alluded to the fact that he would be fighting Hulk Hogan in this year’s WrestleMania, and quickly word got out to fans, and people began to get excited, hoping …

Update on the Lawsuit Between Hulk Hogan & Gawker (12/2013): According to TBO.com , Gawker.com has asked the judge in the case to allow them access to Bubba The Love Sponge’s home in order to investigate the home security set-up, in the on-going case between Hulk Hogan and Gawker.

Hulk Hogan hosts Cowboys' Movember gig (11/2013): Hulk Hogan is white-hatted during Movember Shave the Date at Cowboys Calgary in Calgary, Alta., on Friday November 29, 2013. The wrestling legend hosted the bar's and arm-wrestled the Team Cowboys member who raised the most money for Movember.

Hulk Hogan named Grand Marshal for Super Boat National Championships (09/2013): The local celeb will kick off the event by leading a parade of boats Friday evening.

Hulk Hogan Talks Steroids, Relationship With WWE, Changes In The Business (08/2013): TNA star Hulk Hogan recently appeared on Rover’s Morning Glory radio show. Here are the highlights: Shrinking : “I’m 6’4 now, I used to be a lot, lot, taller. I actually did [shrink]. When I was 27 years old, I was 6’7 on the nose.

Why Won’t Phil Costa Talk About Hulk Hogan Being His Future Father-In-Law? (07/2013): With the latest and most random video blog ever, the GBag Nation gets to the heart of the big issues at Cowboys Camp in Oxnard.

Toucher & Rich: Hulk Hogan’s Message For The Bruins (05/2013): Hulk Hogan joined 98.5 The Sports Hub's Toucher & Rich to discuss the event and chat about his role and a weird meeting with the Iron Sheik at a wrestling convention and some words about the Bruins.

Hulk Hogan was left twisted like "'The Exorcist'" after his unsuccessful back su (01/2013): The wrestling legend recently filed a lawsuit for over $50 million in loss of earnings against the Laser Spine Institute LLC (LSI) in Tampa, Florida, claiming their unnecessary operations on his spine cost him a lucrative contract with the WWE (World Wrestling Entertainment).

Doink the Clown Explains Why He Hates Hulk Hogan; Discusses Character Background (09/2012): Matt Borne, who portrayed the original Doink the Clown, appeared on Inside The Ropes on Thursday to discuss his time as the character. Highlights from the interview are as follows:

Double lung recipient's bucket list? Meeting Hulk Hogan (08/2012): A 33-year-old Midland man, whose body is rejecting a recent double lung transplant, is traveling more than 1,300 miles for a bucket list journey that involves a visit with The Hulkster.

Hulk Hogan's Ex-Wife Linda Retracts Gay Allegations Made Against Her Former Husb (04/2012): Hulk Hogan's ex-wife has decided to retract allegations her wrestler husband had engaged in a gay affair during their marriage.

Hulk Hogan to appear at Agri-Plex in Allentown (08/2011): The wrestling icon will appear Oct. 8 with several other former World Wrestling Entertainment grapplers.

Hulk hogan does not have it anymore! (07/2011): The title says it all. Is this me complaining? In a sense, yes, but I need to know something. Perhaps the top reason why I am not watching TNA iMPACT Wrestling right now is because of company's recent need to shove Hulk Hogan down our throats and make us take him seriously as if he still "has it"?

Hulk Hogan’s ex-wife said she was “afraid he would kill” her “in one of his rage (06/2011): Linda Hogan alleges the wrestling star – whom she divorced in 2008 after 25 years of marriage – had a violent side and was physically abusive toward her.

There's a Hulk Hogan Kinect Game (05/2011): Majesco Entertainment today announced Hulk Hogan's Main Event for Xbox 360 Kinect, due out this fall. It's described as a "performance-based wrestling game" as you train with Hulk Hogan, building your own wrestling personalities and learning the art of showmanship "to win over the crowd." In Hu...

Dixie Carter Reinstated On Twitter, Hulk Hogan Hoodwinked By Imposter (03/2011): Twitter reinstated TNA Wrestling President Dixie Carter's account today after it was suspended Tuesday due to a breach of the microblogging service's terms of use.

Hulk Hogan been to 'hell' with back injuries (01/2011): The wrestling legend underwent a 10-hour operation to rebuild sections of his spine and fellow icon Jeff Jarrett admits the pain he has been living with has been unbelievable.

Hulk Hogan posts gory surgery snaps on Twitter (12/2010): Washington, Dec 28 : American wrestling icon Hulk Hogan, who recently went for a surgery, has given a glimpse of his condition online.