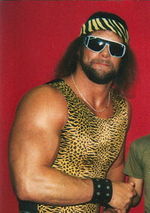 Current items with a signature of Randy Savage

These are the most current items with a signature of Randy Savage that were listed on eBay and on other online stores - click here for more items.

Traded items with a signature of Randy Savage

The most expensive item with a signature of Randy Savage (Wwf Wwe Macho Man Randy Savage Ring Worn Trunks Summerslam 1989 With Coa Signed) was sold in November 2016 for $7199.99 while the cheapest item (MACHO MAN RANDY SAVAGE Signed -300 DPI Digital Download) found a new owner for $0.01 in May 2011. The month with the most items sold (78) was May 2011 with an average selling price of $39.89 for an autographed item of Randy Savage. Sold items reached their highest average selling price in July 2021 with $589.25 and the month that saw the lowest prices with $0.99 was May 2010. In average, an autographed item from Randy Savage is worth $46.01.

Most recently, these items with a signature of Randy Savage were sold on eBay - click here for more items.

TNA's Gunner Says Randy Savage Was One Of His Main Influences, Talks TNA Debut & (01/25/15): Like this post? Share it! On his start into pro wrestling and being in the military: “I did 4 years in the Marine Corp from 2002-2006, I was a Machine Gunner , I was on top of the truck with the ring mount, with the .50 cal or whatever weapon I had and I did my time.

Macho Man Randy Savage Remixes 'Uptown Funk' (01/16/15): Mark Ronson and Bruno Mars' recent single 'Uptown Funk' has garnered so many fans, it's currently holding down the No. 1 spot on the Billboard 100.

Jim Ross Discusses Randy Savage Going Into The WWE Hall Of Fame - Details Inside (01/15/15): Like this post? Share it! Jim Ross has posted a new blog entry, discussing Randy Savage’s induction into the WWE Hall of Fame and their relationship. Here is what Ross had to say…

Macho Man Randy Savage Remixes 'Uptown Funk' (01/2015): Mark Ronson and Bruno Mars' recent single 'Uptown Funk' has garnered so many fans, it's currently holding down the No. 1 spot on the Billboard 100.

Lanny Poffo on WWE Inducting Randy Savage by Himself and More (12/2014): We had the unique opportunity to interview Randy Savage twice back in 2003 and 2004. It was a true childhood dream come to pass.

Major Updates & News On Randy Savage To WWE Hall Of Fame - Details Inside Here (10/2014): Like this post? Share it! According to a source, WWE’s new DVD on Randy Savage may be the first step toward the Hall of Fame induction that is a long time coming.

A Photo Of The New Randy Savage DVD Cover Revealed - View It Inside Here (08/2014): Like this post? Share it! WrestlingDVDNews.com has revealed the cover of WWE 's new "Macho Man: The Randy Savage Story" DVD and Blu-ray. You can pre-order the set now on Amazon. The Collector's Edition box set includes the 2009 Macho Madness DVD, a t-shirt, a bandana and sunglasses.

WWE News: “Macho Man” Randy Savage To Be Inducted In 2015 WWE Hall Of Fame (06/2014): In what can only be described as major news, the WWE seems to be getting very close to getting “Macho Man” Randy Savage (real name Randy Poffo) into the WWE Hall of Fame for the 2015 class speculated to be headlined by The Rock. The WWE has spoken on numerous occasions to the Poffo family,

WWE Planning A Randy Savage Documentary (05/2014): WWE will be releasing a Blu-Ray/DVD documentary on Macho Man Randy Savage early next year. I am told that the company has interviews already filmed with Lanny Poffo for the documentary.

Former WCW Wrestler The Maestro Talks Conflict With Randy Savage, WCW's Disorgan (02/2014): Former WCW wrestler The Maestro stepped IN THE ROOM Tuesday night with Brady Hicks to talk all about his career with the company that was at one time the top wrestling organization in the world.

Lanny Poffo Speaks Out On Randy Savage In The WWE Hall of Fame, Issues With WWE, (12/2013): Former WWE Superstar "The Genius" Lanny Poffo recently appeared on the Shining Wizards Podcast to discuss his career in wrestling as well as his late brother, "Macho Man" Randy Savage.

David Otunga Lands Magazine Cover, CM Punk Fan Incident In The UK, Randy Savage (11/2013): The Harvard-educated attorney, who has not competed on television since the March 18 edition of Raw , resurfaced last month in an interview for WWE.com as he weighed in on Big Show's counter-lawsuit against The Authority.

Lanny Poffo Interview: Vince's Beef With Randy Savage, WWE HOF Speculation (06/2013): Former WWE superstar Lanny "The Genius" Poffo, brother of the late "Macho Man" Randy Savage, was a guest on Live Audio Wrestling on Sunday night. Here are some highlights of what he said about:

Fantasy Match: Randy Savage vs Raven (05/2013): Joey Styles: Welcome, wrestling fans, to round three of The Great 1,024 Wrestler Tournament! We’re live at The ECW Arena in Philadelphia with a highly-anticipated matchup coming up next. And who better to call the action with me than WWE Hall of Famer, Bobby “The Brain” Heenan!

Video: Superstars Pushing For Randy Savage In The 2014 WWE Hall Of Fame (04/2013): This week's edition of WWE Inbox is now online - looking at who should be inducted into the WWE Hall of Fame next year. WWE superstars and divas overwhelmingly name "Macho Man" Randy Savage as a potential inductee, with Paul Bearer also being suggested.

LOPedia - Randy Savage (01/2013): WHY RANDY SAVAGE? Johnny Nash once sung that “there are more questions than answers” but this is one question that redresses the balance slightly. The Macho Man makes this series for a whole host of reasons.

Update On Randy Savage's Chances For The WWE Hall Of Fame's Class Of 2013 (12/2012): According to a high level source in WWE, Randy Savage is "off the list" for this coming year, since his brother Lanny Poffo told WWE that one of Randy's last wishes was that the Poffo family would have to be inducted all together.

Randy Savage's Father, Angelo Poffo, Passes Away (03/2012): Former professional wrestler Angelo Poffo, best known as the father of former champion wrestlers Randy Savage and Lanny Poffo, has passed away at the age of 84. Poffo was an accomplished pro wrestler . . .

Macho Man Randy Savage's 7 Greatest Matches of All Time (12/2011): There may not be a more charasmatic man in the history of professional wrestling than "The Macho Man" Randy Savage. With his trademark hoarse voice and crazy hand gestures, The Macho Man personified 80's cartoon wrestling. Contributor: Ryan Drew Published: May 19, 2011

Jay Lethal Says Hulk Hogan Wanted To Bring Randy Savage To TNA Last Year (09/2011): Jay Lethal participated in an interview with WorldWrestlingInsanity.com. Highlights from the interview are as follows: As most fans know, Ring of Honor is embarking on a new chapter.