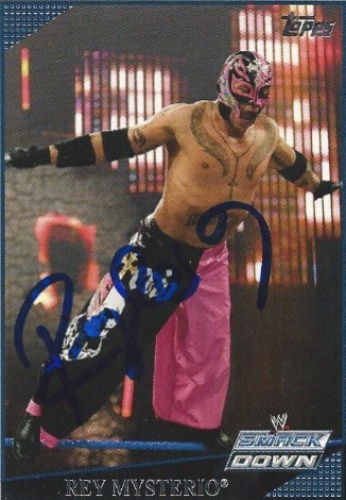 Óscar Gutiérrez (born December 11, 1974), better known by his ring name Rey Mysterio, is an American professional wrestler. He is currently signed to WWE, where he performs on the Raw brand. Widely regarded as one of the greatest professional wrestlers of all time, Mysterio is credited for popularizing cruiserweight wrestling, and is one of the world's most recognizable lucha libre wrestlers. More about Rey Mysterio

Current items with a signature of Rey Mysterio

These are the most current items with a signature of Rey Mysterio that were listed on eBay and on other online stores - click here for more items.

Traded items with a signature of Rey Mysterio

The most expensive item with a signature of Rey Mysterio (WWE REY MYSTERIO JR RING WORN SIGNED MASK WITH PROOF COA) was sold in December 2011 for $1500.00 while the cheapest item (REY MYSTERIO SIGNED BEHIND THE MASK BOOK WWE WRESTLING) found a new owner for $0.01 in January 2010. The month with the most items sold (38) was December 2009 with an average selling price of $13.99 for an autographed item of Rey Mysterio. Sold items reached their highest average selling price in August 2018 with $499.99 and the month that saw the lowest prices with $0.99 was July 2013. In average, an autographed item from Rey Mysterio is worth $27.99.

Most recently, these items with a signature of Rey Mysterio were sold on eBay - click here for more items.

WATCH: Surprise! Andrade beats Rey Mysterio for United States title in MSG at WW (12/27/19): Andrade picked up his first title since transitioning from NXT to the WWE's main roster

Rey Mysterio leaves WWE, is Lucha Underground next? (02/2015): Rey Mysterio is finally free WWE and Rey Mysterio failed to come to terms on a new contract and it’s believed he is now a free agent. His pr ...

Backstage Report: Rey Mysterio Nearly Done With WWE - Details Inside Here (01/2015): According to sources, Rey Mysterio is nearly finished with his negotiations with WWE and could have his official release soon. Mysterio has reportedly been working on getting signing appearances set and promoters are just waiting for his release to begin announcing them.

Rey Mysterio Wants Out Of WWE ASAP - The Very Latest Backstage Updates Inside He (10/2014): Like this post? Share it! We noted earlier that Kris Zellner of LuchaWorld.com is reporting that former WWE announcer Hugo Savinovich, who now works with AAA, is saying that Rey Mysterio is "done" with WWE and will be returning to Mexico's AAA promotion soon.

Backstage News On Rey Mysterio's WWE Issues, Booker T/Stevie Ray Taking Bookings (09/2014): Like this post? Share it! -- Booker T and Stevie Ray are now taking indy bookings together as "Harlem Heat." You can book them through Chuck Rice at @CRICE17 on Twitter. The duo are available for indy appearances and autograph signings.

Reports Claim Rey Mysterio Has Not Cashed Any Of His Recent WWE Paychecks - Deta (07/2014): Several weeks ago here on the website, we noted that Rey Mysterio's WWE contract had expired but WWE renewed it for another year because there is a clause that allows them to renew contracts if the talent misses time due to injuries or other things.

Photo: Rey Mysterio Get's A New Tattoo (06/2014): Want to write for eWrestlingNews? Connect now and find out how to contribute.

Report: Rey Mysterio's WWE Contract Renewed (05/2014): Rey Mysterio 's WWE contract was reportedly set to expire last week. Vince McMahon renewed the deal for one year. This is due to the fact that WWE contracts are allowed to be frozen in the event of injury.

Injury Update On Rey Mysterio (04/2014): Last week Dave Meltzer reported that Rey Mysterio may have suffered a knee injury. Actually, his knee is fine. The injury is actually to his hand and that explains why he's been out of action. There is no word on how bad the injury is but it was bad enough that it was swelling up.

Rey Mysterio to Finish Career In WWE? (03/2014): “I have nothing against AAA (in Mexico), but I do not plan to go there,” Mysterio said. Since returning from his latest knee injury, Mysterio has been reduced from a legacy star to an interchangeable wrestler on the roster.

Former TNA Knockout Says She Wants To Be The Female Rey Mysterio, Talks Acting a (01/2014): Los Angeles, CA, January 20th, 2014 – (blackhollywoodlive.com) Pro-wrestler, actress, and model Thea Trinidad is a rare woman. Don’t let her petite stature fool you, at 4’10 ¾”, she packs a mean punch and eats, sleeps, and breathes wrestling.

Jim Ross Blog: Rey Mysterio's Return, Big E Langston's IC Title Win, Xavier Wood (11/2013): WWE Hall of Famer Jim Ross is back with a new blog on jrsbarbq.com. Here are some highlights from this entry: - Was told that @JCLayfield "knocked" me on the air but I missed it. I must not have been paying attention. (See what I did there?)

Rey Mysterio Comments on WWE Return & Retirement (10/2013): Rey Mysterio spoke with WWE.com about how he didn’t have surgery but instead used stem cell treatment for his injury. Mysterio also confirmed that he will be appearing during WWE’s tour of Mexico this week, but will likely not be wrestling.

Triple H Wishes He Had Match Against Rey Mysterio (06/2013): Triple H revealed during a Q&A session on Twitter that he would like to face The Rock again in a match. Triple H @TripleH “@ksy_jn: @TripleH do you think we’ll ever see you get in the ring with @TheRock again?

Rey Mysterio Trends After Singer Legdrops Female Fan At Awards Show (05/2013): WWE superstar Rey Mysterio was trending worldwide on Twitter on Sunday night - but it had nothing to do with WWE's Extreme Rules pay-per-view. During the Billboard Music Awards, singer Migel performed and at one point, lept over a crowd of people during his performance.

Rey Mysterio and What I think Should Happen (03/2013): So lately, Mysterio has been in talks with WWE regarding him either being released or him retiring. Some within the company say he should be released while others want him to stay, apparently. However, this is how I would want it to plan out.

Doctor's Orders: April 7, 2013 - Rewinding Rey Mysterio vs. Sin Cara (12/2012): Follow me @TheDocLOP on Twitter for wrestling/sports discussion or friend me on Facebook (TheDocLOP). Merry Christmas or Happy Holidays to all of you! I hope you have an incredible day doing whatever it is that you'll do. I also want to thank you for the loyal readership and discussions.

Booking Rey Mysteriofor WM 29 (11/2012): Saving the best moments in Survivor Series history closer to the ppv. Idea just run through my head, thought I should blog about it and see what others think. I personally think it would be better for Rey Mysterio to be the one to say face because all the merch he has and the respect of the fans.

WWE Raw recap: Rey Mysterio, Sin Cara lead entertaining night (09/2012): Both the WWE and World Heavyweight champions walked out of Sunday's Night of Champions pay-per-view with their titles in tow.

Rey Mysterio Talks About Retirement & Updates Concussion Status (08/2012): In an interview with Peoria Star Journal, Rey Mysterio said that he feels like the main thing left to accomplish in WWE is being inducted into the Hall of Fame, but that does not mean he’s considering retirement.

Rey Mysterio Talks Thinking Of Quitting The Business, Tending To Get Lazy, His Y (07/2012): Rey Mysterio revealed he really thought about quitting the business after his most recent knee injury in an interview with ABS-CBNNews.com.

Rey Mysterio Undergoing Another Knee Surgery Today (09/2011): After announcing earlier this week that he might need another surgery on his badly damaged knee, WWE superstar Rey Mysterio confirmed today that the surgery will in fact be necessary - and it will be taking place this afternoon.

Rey Mysterio Announces He’s Having Surgery & Will Be Out For Months (08/2011): Rey Mysterio announced on Monday afternoon that the results of his recent MRI test revealed that he will in fact need surgery to repair his knee, which has already undergone surgery before.

I Give You: Sin Cara vs Rey Mysterio! (07/2011): Remember Me? If this is your first visit, be sure to check out the FAQ by clicking the link above. You may have to register before you can post: click the register link above to proceed. To start viewing messages, select the forum that you want to visit from the selection below.

Rey Mysterio - The Life of a Masked Man (06/2011): Remember Me? If this is your first visit, be sure to check out the FAQ by clicking the link above. You may have to register before you can post: click the register link above to proceed. To start viewing messages, select the forum that you want to visit from the selection below.

WWE and TNA News: Rey Mysterio, The Rock, Sting & More (03/2011): Since there is no live blog on wrestling news on weekends, I've decided to put a slideshow together on Saturday's latest news. I'm interested to see how it goes. I will post the news part first, along with crediting the source. Afterwards, I'll give my take on it.   Begin Slideshow

Backstage News on Rey Mysterio's Feud with Cody Rhodes (02/2011): It was reported Sunday that Rey Mysterio is working through an injury to his rotator cuff. He suffered the injury while working the SmackDown brand's most recent tour overseas.

Rey Mysterio's Feuds.. (01/2011): Remember Me? If this is your first visit, be sure to check out the FAQ by clicking the link above. You may have to register before you can post: click the register link above to proceed. To start viewing messages, select the forum that you want to visit from the selection below.

Rey Mysterio Discusses Changed World Title Match At Sunday's TLC PPV (12/2010): Rey Mysterio appeared on MyFox Houston this morning to promote this Sunday's WWE TLC: Tables, Ladders & Chairs pay-per-view at the Toyota Center. He said that the World Heavyweight Championship bout at the event will be a four-way Tables, Ladders, and Chairs Match.