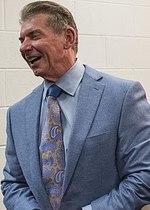 Vincent Kennedy McMahon (/mɪkˈmæn/; born August 24, 1945) is an American professional wrestling promoter and executive, American football executive, and media proprietor. He is currently serving as the chairman and chief executive officer of WWE, the largest professional wrestling promotion in the world. He is also the founder and owner of Alpha Entertainment. More about Vince McMahon

Current items with a signature of Vince McMahon

These are the most current items with a signature of Vince McMahon that were listed on eBay and on other online stores - click here for more items.

Traded items with a signature of Vince McMahon

The most expensive item with a signature of Vince McMahon (Vince McMahon Rare Hand Signed WWE WWF Prop Official Championship Belt Wrestling) was sold in December 2016 for $1499.99 while the cheapest item (HORNSWOGGLE Signed WWE Card Auto ECW RAW Vince McMahon) found a new owner for $0.01 in April 2008. The month with the most items sold (13) was May 2020 with an average selling price of $167.62 for an autographed item of Vince McMahon. Sold items reached their highest average selling price in March 2021 with $835.00 and the month that saw the lowest prices with $2.25 was January 2010. In average, an autographed item from Vince McMahon is worth $35.00.

Most recently, these items with a signature of Vince McMahon were sold on eBay - click here for more items.

How The Undertaker's unique relationship with Vince McMahon, surgical success le (05/15/20): Taker had planned to retire at WrestleMania 33 in Orlando if not for his performance gnawing at his mind

WWE Corporate Filing On Vince McMahon & What It Could Mean If Something Happens (02/11/19): A recent 10-K SEC filing by WWE includes an article about what the company would do if WWE Chairman and CEO Vince McMahon would unexpectedly retire, suffer a disability or death, or other unexpected termination for any reason. The filing reads like this: “In addition to serving as Chairman of our Bo

Brock Lesnar Leaving WWE For UFC? 'The Beast' Throws Universal Title at Chairman (01/2019): Brock Lesnar can be seen walking into the backstage after the match and throwing the title at the chairman, Vince McMahon.

Dana White Says Vince McMahon "Threw the Vault" at Brock Lesnar But He's Happy f (03/2015): “Brock Lesnar came into this sport and did what many people thought he couldn’t do, including myself. He became a world champion. He was part of some of the biggest fights ever. He was fun to have here.”

Muscle Mania! WWE Chief Vince McMahon Chest Presses 450 Lbs. & Has 5% Body Fat—‘ (02/2015): It only makes sense that the head of World Wrestling Entertainment, Inc. is as ripped as the pros gracing his company’s roster of wrestling superstars! In fact, WWE Chairman Vince… READ ON

A New Video Of Vince McMahon Promoting The WWE Network Being Free In The Month O (01/2015): Like this post? Share it! Want to write for eWrestlingNews.com? Connect now and find out how to contribute.

Jim Ross Interview: Vince McMahon's Comments, Has TNA Tried to Hire Him?, GFW, M (12/2014): Working Global Force Wrestling’s English-language presentation of New Japan Pro Wrestling’s Wrestle Kingdom 9 this weekend: "Jeff Jarrett made the inroads, he and my business manager worked out the deal, it was a win-win for both of us, so I said ‘I’m in.’ I’m excited about it.

A Photo Of The Rock & His Mother On Thanksgiving, Vince McMahon's Thanksgiving T (11/2014): Happy Thanksgiving from the most thankful man in the world. -- The Rock also celebrated the Thanksgiving holiday and posted a photo of himself with his mother.

WWE Q3 Conference Call Report - Vince McMahon Speaks Out And Dodges Questions Le (10/2014): Like this post? Share it! * They spent what felt forever discussing the report, simply quoting numbers and not offering a lot of original content (just what had already been released).

Vince McMahon Sends An Email To All Employees - He Claims The Cuts Are Completed (07/2014): UPDATE: Vince McMahon has sent an email to WWE employees saying that today's staff cuts are complete.

Vince Russo Discusses Vince McMahon & 'Austin 3:16', More (06/2014): Vince Russo was a guest on "The Steve Austin Show" this past week and had plenty of interesting comments to say about his time in WWE , specifically working with Austin himself.

Vince McMahon Loses Big (05/2014): If gold stars were awarded based on the rate that any individual could lose money, WWE’s Vince McMahon would have a big book full of the little golden stickers to show off for everyone to see. According to Yahoo Sports, McMahon has lost a whopping $750 million in the last two months climaxing at a

VIDEO: Sheamus Talks Vince McMahon, Locker-Room, More (04/2014): Sheamus recently appeared on CBS Sports 920 & InsideSTL.com in St. Louis. Here are some highlights and the video of his appearance… Locker room resentment from being WWE champion after five months on TV: "I really didn't give a damn. I wasn't a kid.

VIDEO: Hulk Hogan says he can still wrestle, talks about his relationship with V (03/2014): The following videos are from last night's Arsenio Hall show. Want to write for eWrestlingNews? Connect now and find out how to contribute your own content.

WWE Confirms Hogan’s Return and WM Role, Vince McMahon Comments (02/2014): The red and yellow is back, brother. WWE Hall of Famer Hulk Hogan has returned to WWE and will host WrestleMania 30 on Sunday, April 6, at the Mercedes-Benz Superdome in New Orleans.

Vince McMahon and WWE go OTT. Sumner Redstone life lessons. (01/2014): After the coffee. Before the first of many trips to Pasadena.

Vince McMahon Getting Attention For Past Ties To Justine Sacco (12/2013): Vince McMahon was the top trending topic Saturday evening and early Sunday on Yahoo.com; he is currently the second-ranked term, behind actress Anna Paquin.

The true meaning of " YOUR FIRED " made popular by CEO of WWE: Vince McMahon (08/2013): Hello good afternoon this is my first post on here so i would love support from the fellow members of this site and feedback on my topics and what you guys would like me to talk about. Well here I go....

Vince McMahon Believes He Taught Daniel Bryan ‘How To Be A Star’ (07/2013): Though Vince McMahon’s television character is portrayed as having a strong distaste for Daniel Bryan, in reality, Vince thinks quite highly of the wrestler.

Goldust On Almost Getting Match With Cody Rhodes At WM, Idea He Will Present To (05/2013): Former WWE Intercontinental Champion Dustin "Goldust" Runnels recently spoke with Raj Giri of WrestlingINC.com. Here are some highlights from the interview:

MVP Thanks Vince McMahon for His Shot, Latest WrestleMania Promo (03/2013): “Whether I return to WWE or not, I will be forever grateful for the opportunity to live this life. Thanks Vince for giving an ex con a shot.”

Vince McMahon Issues Statement Regarding Injured Punk & TLC PPV (12/2012): WWE’s website published an article with a statement from Vince McMahon. Here is what the article reads.

An Email to Vince McMahon (11/2012): Bear with me. I'm sorry for misleading you, but here's an original idea. I know you disapprove of fans like myself sending in "idea's" but I am no ordinary fan. I have a 180 IQ and have studied the industry from top to bottom.

Vince McMahon donates to Roraback campaign (10/2012): On the list of individuals who donated to Andrew Roraback’s campaign for congress in the 17-day October filing period, one name in particular stands out: Vincent K. McMahon.

Vince McMahon Issues A Shocking Directive Regarding The Booking Of A Major WWE N (09/2012): For those asking what commitment, WWE still owes TNA one more appearance by one of their contracted talents as exchange for their usage of Ric Flair over WrestleMania XXVIII weekend earlier this year, and that talent is Christian.

Kurt Angle Talks About Vince McMahon, Lack of Leadership in WWE, More (08/2012): Kurt Angle spoke exclusively with Alex Barie’s WrestlingNewsWorld.com last week in an interview that has the entire Internet buzzing. Below are some of the highlights.

WWE’s Vince McMahon in the Raw (07/2012): Tonight on USA Network, WWE will air the 1,000th episode of Monday Night Raw, its 19-year-old live series — an unprecedented mark in television historyand another milestone for the sports-entertainment company and its iconic leader, chairman and CEO Vince McMahon.

Jesse Ventura Explains Why Vince McMahon Hasn't Spoken To Him Since 2010 (06/2012): In his latest interview with CYInterview.com, Jesse Ventura discussed numerous political, entertainment and wrestling topics among other things.

Twitter Account Parodying Vince McMahon Leaking WWE Information? (04/2012): The Wrestling Observer reported Thursday that morale is low among members of WWE's creative team after many of the were not invited to the annual post- WrestleMania party Sunday night in Miami, Florida. The report says the party snubs "hurt a lot of feelings."

Former WWE Talent Jay Bradley Critical Of Vince McMahon and John Laurinaitis (02/2012): Jay Bradley, who briefly competed as Ryan Braddock on SmackDown in 2008 and 2009, spoke with Steven Muehlhausen of SportsTownChicago.com about his time with WWE.

What if Vince McMahon Left WWE to go to TNA (01/2012): Just thought I had after posting this little nugget in a thread what if WWE and VinceMcMahon part way and he decide to come to TNA and RUN IT What if? Would It be a Good thing or a bad thing For Tna?

Maryse Ouellet's Message To Vince McMahon - "Your Loss" (11/2011): Paparazzi caught Maryse Ouellet out in Hollywood, California Friday night just hours after WWE announced they had come to terms on the release of the French Canadian entertainer.

New Order from Vince McMahon (10/2011): Vince McMahon recently made the decision to announce the real weights of WWE Superstars instead of worked weights. Kayfabe is declared officially dead!

Vince Mcmahon - Wrestling To Have Its Own Channel Next Year (09/2011): Year in and year out, wrestling has remained one of the top attractions of cable TV -- if not the top attraction. And during a commercial break on WWE Raw SuperShow Monday night the Vince McMahon outfit aired a one-minute commercial for the WWE Network, presum...

Former WWE Star Recalls Pitching Hermaphrodite Character To Vince McMahon (08/2011): His early career with guys like Edge and Christian: "It was always fun with those guys. We would go to all-you-can-eat spaghetti places and just sit there for like 6 hours.

If I Was Vince McMahon.... (06/2011): We all know the wrestling world is buzzing after CM Punks brilliant worked shoot to close out RAW. It was edgy, it was personal and it was damn real, but what does it mean and why was it done?

Abdullah The Butcher Says He Wants To Stick A Fork In Vince McMahon's Head (03/2011): His longevity in the Wrestling Business: "A lot of the people when I tried to get in to New York, a lot of the guys knocked me. They knocked me 'He's gonna use the fork, too much blood, too much this...'. That's why I never got in to New York. The boys are the boys' worst enemies.

Former WWE Writer Explains What Vince McMahon Really Wants (01/2011): In the six years that he was a writer for World Wrestling Entertainment, Ring of Honor producer Dave Lagana worked directly with Vince McMahon and got a good sense of what makes the legendary wrestling promoter tick.

Is Vince Mcmahon really a wrestling Genius? (12/2010): We all know Vince Mcmahon is responsible for bringing pro wrestling into the mainstream media, and that he ruthless tactics enabled him to grow the business and bring its fans countless hours of entertainment.