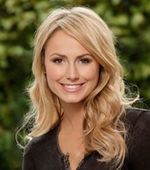 Current items with a signature of Stacy Keibler

These are the most current items with a signature of Stacy Keibler that were listed on eBay and on other online stores - click here for more items.

Traded items with a signature of Stacy Keibler

Most recently, these items with a signature of Stacy Keibler were sold on eBay - click here for more items.

Stacy Keibler Looks Better Than Ever Just Seven Months After Giving Birth: See H (03/18/15): Looking good, Stacy Keibler. The 35-year-old model was spotted on Tuesday enjoying an early morning walk in Los Angeles, where she was photographed chatting on her...

Stacy Keibler Shares Adorable Photo of Baby Ava Grace on a Hike—Check It Out! (03/09/15): Stacy Keibler is one happy mama! The brunette beauty just shared an adorable shot of her little one, Ava Grace, on Instagram and it's almost too cute for...

Stacy Keibler Bonds With Baby Girl Ava Grace on Hike, Reveals Her Post-Baby Bod (03/08/15): I'm in love with my girl! I love this carrier! I love to help! Head over to StacyKeibler.[...]

Stacy Keibler Shares Adorable Photo of Baby Ava Grace on a Hike (02/21/15): Stacy Keibler is one happy mama! The brunette beauty just shared an adorable shot of her little one, Ava Grace, on Instagram and it's almost too cute for words.

Stacy Keibler confirms she is expecting child with Jared Pobre (12/2014): Keibler and newlywed husband Pobre are expecting first child together.

Stacy Keibler Has Baby’s First O’s Jacket (07/2014): Baltimore native Stacy Keibler is getting ready to welcome her first baby and she's already stocking up her closet with Orioles gear!

Stacy Keibler does Pilates to stay 'strong' through pregnancy (06/2014): Stacy Keibler has kept up her strict fitness regime so she can be ''healthy and strong'' for her unborn baby.

Stacy Keibler rocks the baby bump & more (05/2014): Angelina Jolie and Brad Pitt arrive at the world premiere of Disney's "Maleficent" at the El Capitan Theatre in Hollywood on May 28, 2014.

Stacy Keibler: George Clooney’s sexy, soon-to-be-ex flame? (04/2014): The widower of a woman killed by an impaired driver in a hit-and-run crash three years ago told court he considered ending his own life in the months after his wife and high school sweetheart died. In...

Stacy Keibler Is All Smiles in First Sighting Since Pregnancy News—See the Pic! (03/2014): Stylish hat, sunnies, and a smile, but no maternity wear anywhere. Not that Stacy Keibler is in need of an elastic waistband and billowy blouses just yet. The 34-year-old...

Stacy Keibler's Barbie Business Suit: Gotta Have It or Make It Stop? (02/2014): Stacy Keibler is going to kill it at her her big business meeting! Wonder if she'll celebrate by taking a pink Corvette ride with Ken up to the Malibu mansion? If we recall correctly it has a...

White Hot Winter: Jennifer Garner, Stacy Keibler and More Showcase the White Win (11/2013): The good news: the old no white after Labor Day rule is done. It doesn't have to be off-white, eggshell or cream. The style gods have decided we can wear pure white all winter long. The bad...

Stacy Keibler Dresses as Your Crazy Aunt for Halloween! (10/2013): You know your crazy aunt who wore weird clothes that never seemed to be in style? Apparently Stacy Keibler knows her too, and she's decided to dress just like her for Halloween. We...

Does Stacy Keibler Have a New Billionaire Boyfriend? (08/2013): Has Stacy Keibler already moved on from ex George Clooney? Well, … yes and no. A new report from Life & Style on Wednesday claims the 33-year-old beauty has a new man in her life. "She's dating millionaire Jared Pobre, … Continue reading →

Stacy Keibler Escapes From Hollywood: "I'll Just See Where Life Takes Me" (07/2013): Stacy Keibler is getting out of Dodge. The blonde beauty is jetting out of Hollywood tomorrow for a European vacation. "I'm going and winging it as I go," Keibler...

Stacy Keibler shares fitness regime (06/2013): Los Angeles, June 27 (IANS) Actress-model Stacy Keibler says she likes to work out everyday to stay fit. She also advises that one should work out at least for 10 minutes daily to keep in good shape.

Stacy Keibler Joins Fight Against Cancer (04/2013): Actress Stacy Keibler talked to “Extra’s” Mario Lopez at The Grove about her partnership with the American Cancer Society, and ways to get involved in cancer prevention.

Stacy Keibler ’s Gorgeous Glow — Get Her Tan Look (03/2013): All eyes were on Stacy as she dressed to impress at the Escada flagship store opening in Berlin on March 19.

Stacy Keibler loves George Clooney's beard. (02/2013): The 33-year-old former wrestler has been dating the hunky 51-year-old actor since July 2011 and even though he has grown a thick bushy beard, she is still crazy about him.

'Project Runway: All Stars': Stacy Keibler on Her Guest Judging Stint and Favori (12/2012): The actress tells THR how she got involved with the Lifetime competition and what it was like judging the "All Stars." read more

ROLL CALL: Stacy Keibler Slams Baby Rumors With Her Slamming Abs (06/2012): Plus, Miley shows off her backside, Hugh shows off his front and a new Carly Rae Jepsen song drops! Your Daily Dispatch of Celebrity Shenanigans