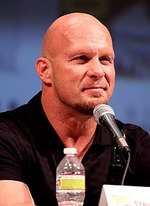 Steve Austin (born Steven James Anderson; December 18, 1964), better known by his ring name "Stone Cold" Steve Austin, is an American media personality, actor, producer, and retired professional wrestler. Widely regarded as one of the greatest and most influential professional wrestlers of all time, he was integral to the development and success of the WWF during the Attitude Era, an industry boom period in the late 1990s and early 2000s. More about Steve Austin

Current items with a signature of Steve Austin

These are the most current items with a signature of Steve Austin that were listed on eBay and on other online stores - click here for more items.

Traded items with a signature of Steve Austin

The most expensive item with a signature of Steve Austin (WWF/WWE ATTITUDE ERA BELT SIGNED STEVE AUSTIN & THE UNDERTAKER W/ PROOF + JSA) was sold in October 2020 for $5000.00 while the cheapest item (AUTOGRAPHED WWE Tommy Dreamer/Steve Austin 4x6 Photos) found a new owner for $0.74 in January 2010. The month with the most items sold (32) was February 2009 with an average selling price of $9.99 for an autographed item of Steve Austin. Sold items reached their highest average selling price in May 2022 with $349.99 and the month that saw the lowest prices with $0.99 was May 2015. In average, an autographed item from Steve Austin is worth $25.86.

Most recently, these items with a signature of Steve Austin were sold on eBay - click here for more items.

WrestleMania 38: Ranking all seven of 'Stone Cold' Steve Austin's matches at the (03/30/22): Austin left a huge legacy despite only wrestling seven times on the grandest stage of them all

WrestleMania 38: 'Stone Cold' Steve Austin set to appear on Kevin Owens' 'KO Sho (03/08/22): Austin will make a surprise appearance when the event returns to the Lone Star State in April

WWE legend Steve Austin: Why it's 'a breath of fresh air' to see CM Punk back on (11/22/19): The six-time WWE champion hopes more is in store for CM Punk as he grows closer to WWE

YouTuber Creates Rock/Steve Austin 'My Way' Promo for Becky Lynch vs. Ronda Rous (02/04/19): The online wrestling community just knocked it out of the park once again.On Friday the YouTube [...]

Steve Austin Hypes His Podcast With Vince McMahon Podcast, Y2J/Rollins Podcast N (11/2014): Like this post? Share it! Want to write for eWrestlingNews.com? Connect now and find out how to contribute.

Photo: Steve Austin Hanging Out With Diamond Dallas Page (09/2014): Like this post? Share it! Want to write for eWrestlingNews.com? Connect now and find out how to contribute.

Hulk Hogan Says He's A Bigger Legend Than Steve Austin - Disagrees With His Rece (08/2014): On how close he was to tears during Monday's birthday tribute video: "That was brutal, dude. They do things at WWE sometimes because I'm what they call a "veteran."

Steve Austin Speaks Out - The Shield Split, WWE Title Situation (06/2014): On the concept for his new show: "I loved doing ‘Redneck Island,' but there is a lot of drama on the show and how you get voted off the island is actually a vote. I wanted a competition show that involved challenges, and when you leave the ranch, it's because you lose something.

Steve Austin & Eric Bischoff Discuss Austin's WCW Firing (05/2014): During the episode the two discussed Bischoff firing Austin from WCW in 1995. Austin had suffered a triceps injury while wrestling on a Japanese tour, and was fired over the phone by Bischoff.

Steve Austin Discusses Kane Hanging Up on Radio Show (03/2014): Kane was a guest on The KiddChris Show back in January and the hosts mentioned Kane’s former “Issac Yankem Gimmick”, which promoted him to abruptly end the interview. Earlier this week, Steve Austin appeared on the show and was played the audio from Kane’s interview.

Steve Austin understands why CM Punk quit WWE, thinks he'll return (01/2014): Steve Austin thinks CM Punk will eventually end up back in WWE, after walking out earlier in the week. Even if it means Vince McMahon has to fly to his house to make it happen.

CMT Greenlights Production on Seven New Series Including the Competition-Based " (12/2013): Plus: "Dog and Beth: On the Hunt" and "Guntucky" to both return for second seasons.

Jim Ross Blog: Steve Austin's Opinion Of John Cena, WM30 Main Event & More (07/2013): In this installment, JR once again stated that he does not believe John Cena will ever turn heel, gave his thoughts on the premiere of Total Divas and said that he doesn't watch TNA or ROH on a regular basis.

Steve Austin Signs Movie Deal with Anchor Bay Entertainment (02/2013): The first project is an action film titled, “Kill em’ All, John” in which Steve Austin will play a former mob hitman that gets brought back into the underworld as he has to race against the clock to kill the heads of the crime families.

Steve Austin Talks About His Dream Opponents, The Attidude Era & More (12/2012): The official WWE website has an interview up with "Stone Cold" Steve Austin talking about the new WWE '13 video game. Here are some highlights of what Austin said about:

Steve Austin Talks Signed Autographs of WWE ’13, Redneck Island, and More (09/2012): Steve Austin has a new blog entry available on his website. Here are some highlights. As I have talked about on Twitter (@steveaustinBSR), I recently finished signing 35,000 autographs for THQ’s new video game WWE 13. The picture cards I signed will go in select Austin 3:16 Editions of the game.

Jake "The Snake" Roberts Interview - Advice He Gave To Steve Austin, His Biggest (08/2012): What advice did he give to Steve Austin shortly before his career took off? “Well, I knew that if they ever pushed him that he would wind up a babyface because again he was the same cut as I was as far as being a bad SOB and not doing stuff that was stupid.

CMT, Steve Austin Team for Redneck Island (05/2012): Produced by 51 Minds Entertainment, Redneck Island takes 12 red, white and blue-collared Americans out of the South, far away from cold beer, and drops them in a tropical paradise where they will compete for $100,000.

Stone Cold Steve Austin -- Mother Nature Opened a Can of Whoopass on My Barn (04/2012): Stone Cold Steve Austin is no match for mother nature -- because a nasty storm just ripped through his Texas ranch ... and left his barn in RUINS.The storm descended on the wrestling legend's Broken Skull Ranch in McMullen County recently -- and the…

Princess Leia Wrestling, Darth Vader Run In, Steve Austin & Ultimate Warrior (12/2011): Wrestling's Best of the Best in Orlando just released a new poster. View it here. Jesse Neal is their poster boy. They are advertising Jesse Neal Vs. Francisco Ciatso on the 25th.

Steve Austin Says Del Rio Is Not Ready To Be Champion & Puts Over Cena (10/2011): During an interview with Patrick Lennon of the UK's Daily Star, WWE Hall of Famer Steve Austin took a few shots at Alberto Del Rio - saying he's not ready to be WWE champion just yet.

Steve Austin Talks About Wrestling CM Punk At WrestleMania (08/2011): During the interview, Austin was asked about the internet buzz that he might come out of retirement to wrestle CM Punk at next year's WrestleMania 28 show from Miami.

More On CM Punk Wanting To Wrestle Steve Austin (07/2011): While the chances of this happening are very slim, people close to CM Punk have said that Punk still has his heart set on a match with retired WWE Hall of Famer "Stone Cold" Steve Austin.

'Stone Cold' Steve Austin is out of the ring but still in front of the camera (04/2011): WWE TOUGH ENOUGH, 8 tonight USA. PASADENA, Calif. - Though he doesn't admit it, "Stone Cold" Steve Austin, the Hall of Fame wrestler from World Wrestling Entertainment, is warming up.