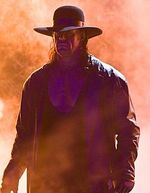 Mark William Calaway (born March 24, 1965), better known by the ring name The Undertaker is an American retired professional wrestler. Widely regarded as one of the greatest professional wrestlers of all time, Calaway spent the vast majority of his career wrestling for WWF/E, and is best known for his critically acclaimed "Deadman" Undertaker gimmick, for which he was inducted into the WWE Hall of Fame in 2022. Calaway remains employed for WWE through a 15-year contract signed in 2019. More about The Undertaker

Current items with a signature of The Undertaker

These are the most current items with a signature of The Undertaker that were listed on eBay and on other online stores - click here for more items.

Traded items with a signature of The Undertaker

The most expensive item with a signature of The Undertaker (2020 Topps WWE Transcendent UNDERTAKER Framed On Card AUTO / Autograph #'d 1/1!) was sold in March 2021 for $9999.00 while the cheapest item (AUTOGRAPHED BANDANA-AUSTIN-LESNAR-UNDERTAKER) found a new owner for $0.99 in July 2010. The month with the most items sold (43) was April 2017 with an average selling price of $51.00 for an autographed item of The Undertaker. Sold items reached their highest average selling price in May 2022 with $399.00 and the month that saw the lowest prices with $0.99 was July 2010. In average, an autographed item from The Undertaker is worth $48.00.

Most recently, these items with a signature of The Undertaker were sold on eBay - click here for more items.

Latest News about The Undertaker

The Undertaker expects to be a 'babbling, blubbering mess' during his induction (03/28/22): Mark Calaway is a nervous wreck heading into his Hall of Fame induction, but he is eternally grateful to celebrate with fans

The Undertaker to be inducted into WWE Hall of Fame as head of 2022 class (02/18/22): A seven-time world champion, The Undertaker is one of the most influential wrestlers of his generation

Triple H on The Undertaker's pursuit of the ideal retirement: 'It has to be done (05/22/20): Triple H concedes that 'The Phenom' is the one who will have to make the difficult decision for himself

Older News Stories about The Undertaker

The Undertaker at WWE WrestleMania: Legendary journey should continue past 2020 (03/2020): The empty WrestleMania 36 setting is no place for the iconic figure to hang up the boots for good

NXT star Tommaso Ciampa details 2005 WWE debut vs. The Undertaker, meeting Steph (11/2019): Ciampa had an interesting first experience with WWE over 14 years ago

Is The Undertaker Getting Ready To Launch A Podcast? (02/2019): In an era where seemingly every top wrestling star has been flirting with launching a podcast, [...]

The Undertaker WrestleMania Loss: Brock Lesnar, WWE Benefit From Ending The Stre (04/2015): It’s been one year since perhaps the most shocking moment in WWE history. The Undertaker was pinned by Brock Lesnar at WrestleMania 30, snapping his undefeated streak and putting his record at the pay-per-view at 21-1.

WrestleMania 32 Rumors: The Undertaker vs. Sting An Option For WWE (03/2015): The Undertaker defeated Bray Wyatt at WrestleMania 31, while Sting was beaten in his first ever WWE match, losing to Triple H. The future is unknown for both wrestlers, but the possibility remains that the two legends could have a match against each other before they call it quits.

How Bray Wyatt should beat ‘The Undertaker’ (02/2015): Undertaker Versus Bray Wyatt will probably be the most polarizing match on the card come WrestleMania 31. The reason for this lies in the complicated question of how The WWE should end the match.

Baskstage News On The Undertaker's WWE Status; Update On Possible WrestleMania 3 (01/2015): The Undertaker versus Bray Wyatt and Daniel Bryan versus Sheamus are also expected to take place but are not locks. However, last word on The Undertaker was that WWE officials still did not know if he was returning for sure or not.

Kevin Klein’s surprising return buries The Undertaker (11/2014): With the somewhat surprisingly quick return of Rangers defenseman Kevin Klein, the reign of The Undertaker on Broadway has ended. Klein was in the lineup for Wednesday night’s 4-3 overtime...

Photo Of The Undertaker With Several WWF Superstars (09/2014): Like this post? Share it! Want to write for eWrestlingNews.com? Connect now and find out how to contribute.

Check Out Some Videos Of The Undertaker & Michelle McCool Accepting The ALS Chal (08/2014): Want to write for eWrestlingNews.com? Connect now and find out how to contribute.

Batista Discusses The Undertaker's Streak Ending And Says 'It Sucked', Talks Sti (07/2014): On "The Streak" ending: "It sucked! Honestly, I thought it sucked. I haven't really talked much about it but I think it was a bad decision, a horrible decision. I don't have any say in the matter but to me, watching as a fan, it made me sick.

WWE News: Health Status Of The Undertaker, Will He Be Back By WrestleMania 31? (06/2014): When it comes to the WWE, there are Superstars and then there are Legends. A man by the name of The Undertaker is in that legend status. He is one of the greatest of all time. Disregarding his 21 year streak at WrestleMania where he never lost, Undertaker has been part of some of WWE’s

Fruit and veg keep the undertaker away (03/2014): A UK study shows seven fruits and vegetables a day reduce a person's risk of dying, but only five per cent of Australians achieve the target.

Video: When the Undertaker opened the ‘Hell’s Gate’ for the 1st time (02/2014): The Undertaker's Hell's Gate move on Big Daddy V

Undercutting the undertaker: Reducing the unavoidable expenses of dying (01/2014): When a loved one dies, decisions need to be made quickly. But one need not be vulnerable financially.

Meet the undertaker for the overshare generation (11/2013): He tweets. He blogs. He embalms. Caleb Wilde is a sixth-generation mortician, working for the family business in small-town Pennsylvania.

In the kitchen with Matt 'The Undertaker' Djerf, Nevermind (10/2013): The Undertaker lives in Cape Coral with his boxer-pit bull mix, Kilo. He's worked at Nevermind Awesome Bar & Eatery since it opened in November 2012.

WWE Issues Cryptic Twitter Message Pointing To The Return Of The Undertaker (09/2013): WWE is teasing the return of The Undertaker via social media outlet Twitter. This afternoon, the sports-entertainment organization released another cryptic "#RestinPieces" message referencing his debut appearance at the 1990 Survivor Series .

WM 30-John Cena vs CM Punk or Cena vs The Undertaker? (07/2013): At WrestleMania 30, there are many possibilities for matches that could happen. A match that some feel could easily draw huge is a match between the two biggest stars of the past 5 years.

The Undertaker: leave and maybe STAY gone? (06/2013): I've been thinking about this a lot the past couple of years, and I know with all the 'Taker marks, I may get some flak, but here goes... Undertaker is no longer entertaining to watch. There, I said it.

The Undertaker voted greatest WWE Superstar of all time (05/2013): Digital Spy readers vote The Phenom the greatest of all time.

Smackdown!:The Undertaker returns to Friday night action (04/2013): It's always an interesting crowd when Smackdown! tapes across the pond in England, so expect lots of Fandango-ing in the seats tonight. If that doesn't get you excited, how about the in-ring return of the Undertaker? Those lucky Brits.

More On The Undertaker's WWE TV Return & WM29 Opponent (02/2013): As noted earlier, The Undertaker's television return is imminent and could take place as soon as Monday's "Old School" RAW. The long-rumored Undertaker vs. CM Punk match at WrestleMania will in fact be taking place.

JR Blog: Big E Langston with Ziggler & AJ, The Undertaker and The Rock Returns (12/2012): Jim Ross is back with a new blog over on jrsbarbq.com. Here are some highlights: - Many are asking about the return of the Undertaker as mentioned by HHH Monday Night on Raw. 'Not seeing the last of the Deadman' can mean a variety of things, one can assume.

He's behind you... Will Cable play the undertaker again? (09/2012): It has become as much a part of Liberal Democrat tradition as sandals and silly conference debates: a leader knows it is time to clear his desk when Vince Cable comes to tell him what the party thinks of him.

Don't call me 'The Undertaker'! (08/2012): A Staten Island funeral director charged with illegal gambling doesn’t want to be caught dead in court being called by his nickname, “The Undertaker.”

The Undertaker Appearing At Upcoming FCW Event In Tampa, FL (06/2012): UNDERTAKER AT FCW! The Dallas Bull in Tampa, Florida will be hosting a live FCW event on Wednesday, August 1st with special guest The Undertaker! This is an all-ages event. Doors open at 5:30pm.

WWE Covers Up The Undertaker's Head For Cover Of New WWE Magazine (02/2012): WWE has released four different "WrestleMania" covers for the March 2012 issue of WWE Magazine , featuring The Undertaker, Triple H, John Cena and The Rock.

Wrestling Wrap Up: The Undertaker Returns! (01/2012): Wait a second here. Punk vs. Bryan? Jericho attacking Punk? The Undertaker's return? Psychotic Eve? What the hell happened? How did we wind up getting such a spectacular RAW after such a jerkstore of a pay per view? I'll get to the Royal Rumble in a minute here, but I think most of us can...

The Undertaker's Role (09/2011): It’s always been one of the more pressing questions when it comes to the wrestling world, do you prefer spectacle or realism?

Will we ever see the undertaker (05/2011): Remember Me? If this is your first visit, be sure to check out the FAQ by clicking the link above. You may have to register before you can post: click the register link above to proceed. To start viewing messages, select the forum that you want to visit from the selection below.

This just in, the winner of Mat Madness is ... The Undertaker (04/2011): All comments must be approved by the blog author. Please do not resubmit comments if they do not immediately appear. You are not required to use your full name when posting, but you should use a real e-mail address. Comments may be republished in print, but we will not publish your e-mail address.

Ranking The Undertaker's WrestleMania Streak (03/2011): The Undertaker. The Phenom. The Dead Man. American Bad Ass. Big Evil. Large Darkness. Jerk McGirk. The "Guy Who Owes Me Fifty Bucks." For over 20 years, Taker has thrilled audiences around the globe with his macabre theatrics and his unparalleled athletic ability. He's also been given one of...

Brock Lesnar Says He Doesn't Care For The Undertaker (01/2011): Earlier this week, UFC heavyweight fighter Brock Lesnar set the record straight on his involvement at WrestleMania 27, telling Yahoo! Sports that there was no truth to the rumors that he was interested in working the show.