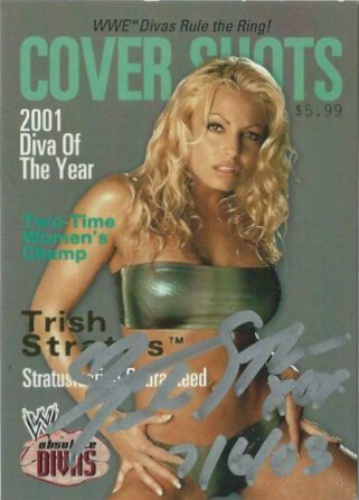 Patricia Anne Stratigias (/ˈstrætɪdʒiəs/; born December 18, 1975) better known by the ring name Trish Stratus, is a Canadian professional wrestler. Often regarded as one of the greatest women's performers, she was also one of the most popular female superstars in World Wrestling Entertainment (WWE). More about Trish Stratus

Current items with a signature of Trish Stratus

These are the most current items with a signature of Trish Stratus that were listed on eBay and on other online stores - click here for more items.

Traded items with a signature of Trish Stratus

Most recently, these items with a signature of Trish Stratus were sold on eBay - click here for more items.

WWE gossip column: HHH Vs Batista? Bayley & Sasha vs Trish Stratus & Lita? (02/19/19): With WWE Elimination Chamber and Monday Night Raw in the books, the WWE has made plenty of curious decisions over the past few days. Fresh off an NXT of sorts, let’s take a look at the rumour…

Trish Stratus On Demanding Dangerous Spot During Mud Wrestling Match (12/06/18): Trish Stratus is a WWE Hall Of Famer and she earned that honor in a big way. She was a part of the women's roster before there was a Revolution. In a lot o

Check Out The Official Trailer For WWE’s Joke Rom-Com Featuring Kane & Trish Str (02/2015): Like this post? Share it! Here is a new video from WWE , using clips of Trish Stratus and Kane to put together a romantic comedy trailer titled Love in WWE: A Burning Love Story.

Trish Stratus Discusses Retiring In 2006, How Scripted Pro Wrestling Matches Are (10/2014): Like this post? Share it! On if it was hard to retire in 2006: “I had a robust career…I had done it all. The wrestling world has a short shelf life and there were all the injuries.

Former WWE Diva Trish Stratus Says She Wants To See Male vs. Female Matches & Mo (09/2014): Like this post? Share it! Trish Stratus recently spoke with CBS News and shared her thoughts on the Divas division. She said that she would like to see the women take on the men again and that the Divas need more developed characters.

Ultra-busy Trish Stratus still a fan (08/2014): Given how many things Trish Stratus has on the go at any one time -- acting, running her Stratusphere Yoga business, raising her son -- it's no surprise that she has to multi-task, like conduct this interview over the phone while taking her son out for a walk.

D-Bryan On Y2J's Podcast, Cool Trish Stratus/Jim Ross Photo (05/2014): Want to write for eWrestlingNews? Connect now and find out how to contribute.

PR: Trish Stratus and The Treadmill Factory Announce New Partnership (12/2013): Dec 16, 2013 – TORONTO /TrishStratus.com/ – Stratus Enterprises, Inc. is pleased to announce that it has signed a distribution and licensing deal with The Treadmill Factory just in time for the holiday season.

Trish Stratus Talks About Which Divas Should Be In WWE Hall of Fame (06/2013): WWE Hall of Famer Trish Stratus was recently interviewed by Gerry Strauss of The Layfield report. Here are some highlights. Divas she keeps in touch with: “So I always speak to Nattie all the time, just continuing to encourage her.

Taeler Hendrix On Waiting To Be Promoted By TNA, Critics Of Trish Stratus, Lesbi (05/2013): TNA Knockout Taeler Hendrix returned to The Greg DeMarco Show to discuss her career since becoming an official TNA contracted talent, the impact of Trish Stratus on today’s female wrestlers, and her controversial love story with Heidi Lovelace in OVW.

Hall induction 'stratusfying' for Trish Stratus (03/2013): Trish Stratus built a career out of defying the odds and breaking new ground.

Top 10 biggest moments in Trish Stratus WWE career..... (02/2013): To give some much needed love to in my opinion the greatest women's wrestler of all-time: Trish Stratus...decided to make a top 10 moments blog. This is because she is going into the Hall as well. Did the same with Foley in previous blog. How can you possibly break this down?

Trish Stratus and Lita Reunite Following Raw 1,000, Recall Their Great Moment (07/2012): Following Monday's historic 1,000th episode of Raw , friends and former rivals Trish Stratus and Lita reunited backstage for an exclusive WWE.com video to talk about their big moment on the program—main-eventing against each other on December 6, 2004.

Trish Stratus Talks Divas 'Mania 28 Booking, Natalya Flatulence, JoMo Cold Shoul (02/2012): Trish Stratus joined us again recently ahead of the DVD release of her debut movie, Bounty Hunters. We talk to Trish about the movie and whether she has any more movie roles in the pipeline, as well as talk wrestling.

Trish Stratus gets twisted into shape 0 (06/2011): Former WWE superstar Trish Stratus, 35, of Toronto, has embraced yoga since retiring from pro wrestling (on a full-time basis -- she still makes occasional cameo appearances) in 2006. The former fitness model now runs her own yoga studio in Toronto.

Trish Stratus Says Chyna Should Go In The WWE HOF, Calls Natalya "Untapped" (03/2011): IGN.com features an interview with multi-time WWE Women's Champion Trish Stratus promoting the USA Network's revival of Tough Enough , who appears as a trainer on the show. She notes that many of the contestants have previous wrestling experience.

Trish Stratus Interview: Lay-Cool, Her Yoga Studio & Movie Career (02/2011): Getting Physical With Lay-Cool: "Lay-Cool irks me a bit. They’ve been running their mouths off, so I thought I’d show them who’s “tough enough.” [laughs]